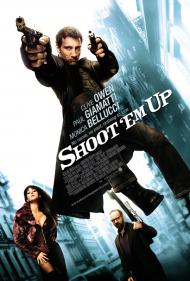 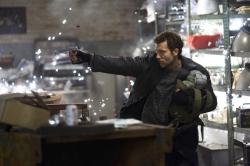 Clive Owen in Shoot 'em Up.

Although Shoot 'em Up didn't exactly heat up the box office, I'm confidant it will live on as a cult classic on DVD. The only problem with it was simply poor marketing. If you believed the previews, it looked like just a so-so action movie, of the kind we've seen dozens of times before. Actually, it's an over-the-top action-comedy that completely sends up the cliches of all those action movies.

Clive Owen stars as Smith, a mysterious British man with a fondness for carrots (both as snacks and as weapons). While waiting at a bus stop, he witnesses a pregnant woman being stalked by a man. After rescuing the woman from him, and delivering her baby in the process, he quickly finds himself facing a literal army of gunmen all intent on killing the woman and the baby. The rest of the movie is his attempt to keep the baby alive while trying to figure out just why these people want him dead to begin with.

The comedy in this movie is derived from the action scenes, which take your normal action moments and then take them to about the 20th level above that. For instance, Smith is fighting off a large group of gunmen while he delivers the baby at the beginning. During the process, he not only pulls off the most improbable shots, he also uses his gun to shoot the umbilical cord. Or later, when making love to a woman, he manages to have a shootout, without ever stopping having sex. And again, later in the film, he even manages to hold a wonderfully staged and comic gunfight in midair while plummeting from an airplane. Also, as I mentioned, he manages to make good, violent and yet funny use, of his carrots.

He solves the mystery of the baby by the use of some of the oddest coincidences and longest leaps of logic that you're ever likely to see in a movie. Suitably over-complicated, it wouldn't be as funny, if other movies hadn't also had such obvious plot contrivances to bring their story to a conclusion.

Owen, who has the acting ability and presence to carry a genuine action film, is great in the lead. He plays the role completely straight, letting the action get the laughs and not him. And Giamatti is terrificly sadistic and creepily crazy as the villain behind the plot to kill the baby.

It's a pity that this movie was advertised as a straight action movie. If you go in not expecting comedy, you could end up just thinking that this is a poorly made, unintentionally funny movie. But actually, it is obvious that this is a movie where the filmmakers knew exactly what they were doing, which is why I believe this movie will live on much longer than its box office receipts indicate. 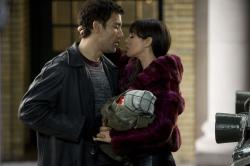 Clive Owen and Monica Bellucci in Shoot 'em Up.

Shoot Em Up is very aptly titled. The action is plentiful and it never takes itself seriously. This makes for a fun film but it lacks in tension. The hero gets constantly wounded but considering that hundreds of bullets get shot at him and miss, you never really worry about his mortality. It is an old critics joke, but it never fit better than to say that these guys went to Darth Vader's storm trooper school of marksmanship.

I am not convinced that this movie will become a cult classic and the reason lies with Giamatti. His villain is crazy but not over the top. Kevin Spacey was hamier in Superman Returns, and that was not a good thing. Shoot Em Up is supposed to be campy, and Giamatti is down playing. His calls to his wife are worth a smile or two but he should have played it bigger.

One last thing worth noting: Monica! She has never looked hotter. In the words of Rick Flair, Wooooooooo.