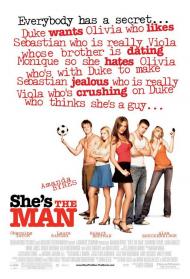 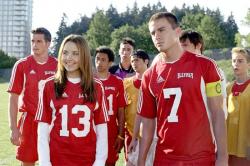 Amanda Bynes and Channing Tatum in She's the Man.

Amanda Bynes is so damn likeably perky that she can even make this simplified teen comedy version of Shakespeare's Twelfth Night enjoyable. And that's despite the silly plot and the fact that she is completely unbelievable playing a boy. Whatever IT is, she certainly has it.

The plot, which is courtesy of the people who brought you the updated Taming of the Shrew, 10 Things I Hate About You, is recognizable as Twelfth Night inspired without being a verbatim update. Bynes plays Viola, a high school soccer player who poses as her absent brother Sebastian at his new boarding school when her own school cuts the girl's soccer team. Her hope is to make the boy's team at her new school and beat her old school's team, which includes her ex-boyfriend. Inevitably, Viola ends up falling in love with Duke, her new roommate, but he's in love with Olivia, who is in turn, in love with Viola in disguise as Sebastian.

While all of the intrigue and circular love has all the tension of your average sitcom episode, it is done with enough good natured humor to keep you interested and laughing. And while I'm usually a stickler for plot points and the gaping holes they sometimes leave behind, in this movie it doesn't matter. Sure, there's no way anyone would believe Viola is Sebastian. They don't look that much alike to begin with, not to mention Sebastian is about a foot taller than her. And Viola only stands out all the more when 20 year-old Bynes is surrounded by fellow high-school students being played by male actors in their mid to late twenties. To make her stand out less, why didn't they hire actors younger than her? It only accentuates that she's a girl when her soccer buddies all have five o'clock shadow.

Although this is obviously the Amanda show, the supporting cast is equally likeable, if somewhat generic. Duke could have been played by any random guy from the pages of Teen Beat magazine. David Cross gives a weirdly eccentric turn as the school Headmaster.

Clearly this is not a movie aiming for realism. It is aiming to be a light hearted comedy that will be most enjoyed by young girls, and at that it succeeds. However, I'm not so jaded that I can't admit that I found quite a few laughs here myself. 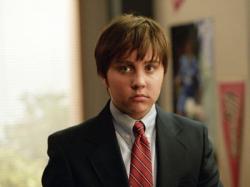 Amanda Bynes in She's the Man.

Channing Tatum is 26 years old and looks it. Amanda Bynes is 20 but looks like a 12 year old boy when she cross dresses. If you can actually accept that Bynes is convincing as a boy and that these two “guys" are the same age then you may enjoy this movie. Only if this movie took place in middle school could her performance have been convincing to me.

To her credit, Bynes throws herself into the role and seems to be having fun. Although only 20, she is a veteran of slapstick comedy having done it for years on All That and The Amanda Show. Her best scene is when she enters the debutante luncheon acting like anything but a debutante.

Scott wrote that the role of Duke is pretty much just to look good. For the most part that is true, but Tatum does play up Duke's insecurities fairly well. Instead of being the arrogant jock, Duke turns out to be sensitive and thus is the most interesting character in the movie.