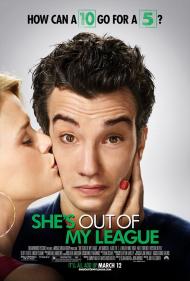 Barbie has her choice between Ken and Squiggy.

I recall seeing a picture of beautiful country singer Shania Twain and her unattractive husband. How could such a ordinary looking guy get such a beautiful woman? Okay, we know how Hugh Hefner does it, but how do guys who don't have millions do it? That is the question She's Out of My League attempts to answer.

Kirk is your average, insecure 20 something, who still lives at home. He works at an airport with his three firends. He works in security, where he finds the cell phone of a beautiful girl, Molly, who just boarded a plane. She calls him from the plane and asks to meet him when she gets back, to return the phone. They meet, and start dating.

Kirk is just out of a bad relationship that is constantly in his face. His former girlfriend is very close to his parents, so she, and her new boyfriend, are always at his house. Molly is likewise just out of a relationship with a tall, goodlooking pilot, Cam, who has the nickname "Footlong" painted on the side of his plane. While Kirk and Molly are on a date, he walks up and assumes the Kirk is her gay friend.

Kirk's friends are all impressed by Molly's looks and try to give him advice on their relationship. At one point, Jack drops his pants to demonstrate that Kirk should shave his testicles to make them seem more inviting, like his. What follows is a scene of Kirk trying to shave himself. It is not as funny as it is meant to be.

Written by the guys who brought us Sex Drive, She's Out of My League makes these 20 somethings seem more like teenagers. Kirk and Molly take it slow, sexually speaking. In one scene, they are fully clothed, making out on her couch. She straddles him and grinds away. He ends up ejaculating in his pants. Of course that is right when her parents decide to visit. The real punchline for that scene comes (no pun intended) in the next one, when he meets his three friends at work and Stainer says, "My shift doesn't start for a half hour, I just came early." Like I said, the jokes are pretty juvenile.

To it's credit, She's Out of My League makes a meager effort to show why a 10 may want a 5. Several moments have Kirk do some random little kind gesture as Molly smiles appreciatively. At one point Molly lies to her parents about what Kirk does for a living. The writers were making an attempt to show some depth in these characters. She is a ten, but she is not perfect.

Speaking of Molly, Alice Eve is beautiful in the sense that all of her parts are properly proportioned to make her attractive. However, she really has very little charisma. Some actresses seem better looking than they really are because of their mannerisms (Sarah Jessica Parker)or smile (Julia Roberts). Eve relies solely on her boobs. Nearly every outfit she wears shows some amount of cleavage. She is also not a great actress, and seems to get lost when required to do anything other than pose.

My 16 year old son thought this movie was funny, and I guess that makes sense as he is more it's target audience than I. The idea that a hottie could go for a average guy is a decent enough plot device. Molly has a scene where she says she would love Kirk no matter what he did for a living. Then the movie cops out with the last scene of him surprising her with a plane ride, as he has secretly got a airplane license. So what is the message? A beautiful woman should love a man no matter what his job or looks, as long as he is nice. Or is it that a man is inspired by a woman above him, to better himself? Either way, She's Out of My League works best when keeping it light and not overanalyzing. 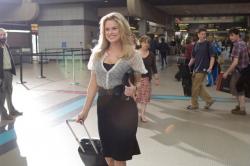 Alice Eve in She's Out of My League.

You summed up the whole movie perfectly Eric when you said, "It is not as funny as it is meant to be."  It tries hard enough, but not enough of the jokes actually work.  It all feels very Judd Apatow-lite, like a weak cousin of The 40 Year Old Virgin.

Two of the scenes you mention are perfect examples of not being funny enough.  When Kirk shoots off early in his pants and the dog and Molly's parents show up, it is setup to be quite farcical, but then it never really goes anywhere.  Likewise when Kirk's friend drops his pants to show everyone that he shaves his genitals and then when Kirk's other friend actually helps Kirk shave.  Those moments aren't funny, they're just odd.

Although the movie tries to give reasons why Kirk and Molly are together, their relationship seems doomed.  How long until Molly becomes bored with Kirk?  She's upper class and he's middle class and they seem to share only a few common interests.  As she freely admits, she only dated him because she wanted someone safe after her last boyfriend.  As for Kirk, he's just moved from one relationship where he was dominated by a woman to another relationship where he's dominated by a woman, just a nicer more attractive one is all.

The funniest moments in the movie all involve Kirk's family.  Their reaction when he brings Molly over is worth a few laughs.  Debra Jo Rupp (That 70s Show) is funny whatever she's in and she causes a few chuckles here.  Perhaps the movie's funniest scene is near the very end when Kirk finally reaches the breaking point with his family when they're on the plane.  I won't ruin the punchline, but I definitely laughed hardest at it.

There are a few laughs scattered through out.  Just about enough to keep you from being bored while you watch it, but not enough to make it great.