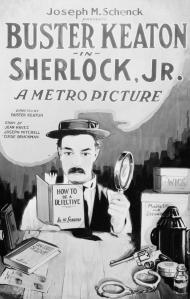 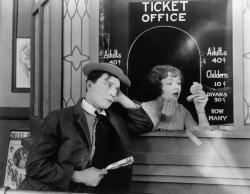 Buster Keaton directed, as well as starred in, Sherlock Jr. It is one of his most special effects filled films. Some of the tricks he pulls here have been used a thousand times since, and although this movie is nearing 100 years old, they still look good. He was an amazing film innovator.

Keaton plays a movie projectionist who is studying to be a detective. He gets blamed for stealing a watch from the father of the girl he is in love with. He runs off and falls asleep in his projection room while a movie is playing. He dreams that he wakes up and walks into the movie. In 1944's Cover Girl, Gene Kelly dances with a reflection and then a duplicated image of himself. When Keaton goes into his dream you see two of him. One is asleep and the other is walking around. Kelly's sequence, 20 years later does not improve on Keatons direction.

After he enters the movie, Keaton finds himself in an astounding sequence, jumping from one scene to another. When he finally enters the actual movie, he is a detective who rescues the girl and foils the bad guys. There is the required car chase that ends with an exploding billiards ball and a car going into a lake.

The best stunt in the movie, though, is Keaton riding on a motorcycle handle bars after the driver is knocked of. He must have spent some time on the timing of those scenes. Not only was he an actor and director but he was one of the greatest stuntmen ever.

Other silent film comedians did pratfalls and physical stunts like Keaton, but none were so technical in their film making. He explored the possibilities and advanced the art of the motion picture. Sherlock Jr. is a surreal fantasy that shows just how far we have not come in film making. 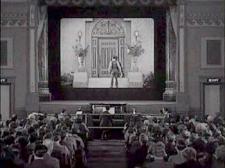 Buster Keatons walks into the movie in Sherlock Jr.

This isn't the greatest silent film I've ever seen, but it is certainly the most innovative. There were several moments in it where I had to back the movie up to watch them again. Like you say Eric, some of the film tricks Keaton does here have never been improved upon.

The truly amazing scenes all take place during the dream sequence. Most impressive is when Keaton walks into the movie screen and then jumps from scene to scene. The careful editing that must have taken place to pull the sequence off is astounding. Nowadays it would be a doddle to pull this scene off with computers, but it wouldn't have looked much better.

There are also two great leaping scenes. One where Keaton leaps through a window and straight into a disguise in one swift motion and another where Keaton jumps literally straight through his assistant.

While the movie is a stream of wow-inducing moments, there's not a lot of emotion in it. Keaton was an innovative filmmaker, but he never connects with the audience in the same way that Chaplin or Lloyd did. Chaplin in particular was adept at making you empathize with his Tramp character. Keaton, while funny and entertaining, lacked that human touch.

At a mere 45 minutes, each one packed with something to look at, this movie flies by. Some silent films are impressive for their time, Sherlock Jr. is just plain impressive. 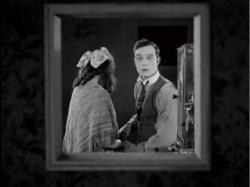 Both of my brothers sell Sherlock Jr. short. It is quite simply the highpoint of Buster Keaton’s career and quite possibly the apogee of silent movie comedy. From beginning to end it is a masterpiece. In terms of imagination and technical innovation Keaton was in a league of his own and Sherlock Jr. offers a master class in how to make a movie and tell a story.

Scott I disagree about the lack of emotion. Keaton’s earnestness at the beginning of the movie, as he courts his girl, is sweetly touching. And the moment he wakes up to discover that his heroic fantasy has all been a dream packs plenty of pathos. And it’s doubly affective because he doesn’t linger on it or beat you over the head with heart.

The structure of the movie is brilliant. Keaton is a love starved movie projectionist with dreams of being a great detective. He then gets falsely accused of a crime and with no recourse, save his dreams, falls asleep and into the world of the movies. Hollywood as the Dream Factory personified.

The transition into the movie is sublime as my brothers wrote. But the heart of the story occurs once the movie-within-the-movie-becomes-a-dream and the movies’ stars are replaced by the people he knows in real life. The scene where Buster plays billiards is superb. It’s not enough that the man was a comic genius and unequalled physical comedian, he also happened to be an excellent pool player. I wonder how much rehearsal time and how many takes it took to shoot this scene?

The final chase is probably the best scene of its type ever committed to celluloid. The sight gags never let up as Keaton seems determined to top himself with each successive visual trick. I once believed The General to be Keaton’s true masterpiece. I now know better. Sherlock Jr. is cinematic perfection itself.