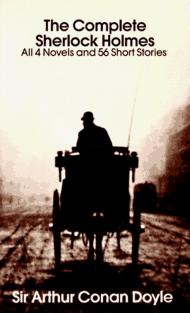 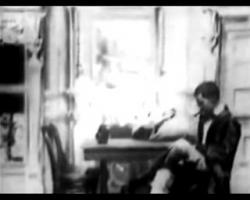 The identity of the first actor to play Sherlock Holmes in a motion picture is unknown.

With over 300 movie, TV, radio, comic, video game and just about any other media you can think of, adaptations, Sherlock Holmes has to be the most successful pop culture figure of all time.  In just the past year we've seen two new versions of the classic detective; the Guy Ritchie directed film and the Stephen Moffat written BBC series.  He's as popular today as he's ever been.  It's hardly surprising then that as early as 1900, filmmakers were attempting to cash in on his popularity.

While this 30 second short barely qualifies as a movie, it does feature actors and a very, very short (I hesitate to say "story") situation.  Sherlock Holmes, who is really only identifiable by the title, comes into his drawing room to see a thief ransacking the place.  When Holmes tries to grab the thief, he inexplicably vanishes in mid-air only to reappear again a moment later.  Holmes shoots at him, but the thief's ability to teleport saves his life again and he ends up getting away with the loot.

Unlike later shorts and films, this film was never intended to be shown in a theater, but on a Mutoscope (a competitor of Edison's Kinetoscope), a small "peep-show" machine that was only viewable by one person at a time.  Biograph, who produced both this short and the machine it was to be viewed on, was normally in the business of filming actualities (documentary footage of actual persons, places and events), but made a rare exception of fiction, with this short.

Granted this is no Citizen Kane and is just a curiousity today, but it does try to briefly entertain and it gives a tiny little glimpse into the possiblity of the then still in its infancy, motion picture industry. 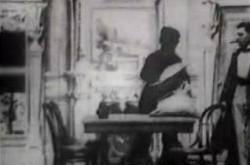 Sir Arthur Conan Doyle's legendary Sherlock Holmes first appeared in print in 1887.  When this clip was made, many of his stories had yet to be written.  The one and only one, that I have read, The Hounds of the Baskervilles, was released the following two years in serial form in the magazine The Strand.

According to the Guinness Book of World Records, Sherlock Holmes is the most portrayed character in film history.   Over 75 actors have played him in over 200 films.   It is a shame this actor goes uncredited. 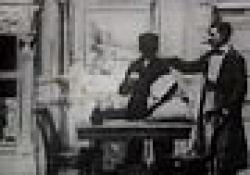 For a 30 second movie (shot a mere 9 years after the very first "moving" pictures were made) Sherlock Holmes Baffled packs in plenty of plot and action.  It involves suspense (just who is this thief?), what appear to be supernatural powers (how does he teleport?) and a shoot 'em up finale (Holmes, never losing his composure, fires at the intruder).

This movie demonstrates that the penny arcades of the day, besides offering audiences glimpses of real life, were also contributing to the invention of the film narrative, even before audiences sat together in the dark to watch them.