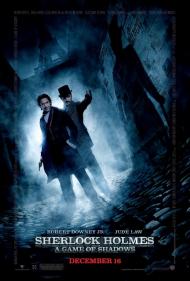 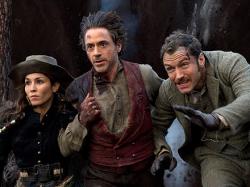 With 2009's Sherlock Holmes, Guy Ritchie, Robert Downey Jr. and Jude Law brought us an updated, action packed,  and entertaining reimagining of Arthur Conan Doyle's famous detective. It retained enough of the spirit of the original stories to be recognizable, but put a modern fast paced spin on them. The real treat though was the chemistry between Downey Jr. and Law as Holmes and Watson. Now the same cast and crew are back for a sequel that doesn't quite equal the first, but still manages to entertain.

The spirit of the original Holmes seems dimmer this time around as the plot resembles more of a Victorian era James Bond than it does a Sherlock Holmes tale. Holmes' archenemy Professor Moriarty has plans to start a world war to benefit his newly acquired ammunition factories. While almost all of the original Holmes stories took place in or around London, this story has Holmes and Watson journeying across Europe from London, to Paris, to Germany and climaxes in the mountains of Switzerland. There's even a few gadgets thrown in for good measure.

It is the interaction between Holmes and Watson that is the real highlight of the movie, as it was in the first. Law and Downey Jr. share a great comic chemistry, bickering like an old married couple yet always being there for each other when they're needed. The most enjoyable portion of the film is their time together, particularly at the beginning of the story when Holmes takes Watson out for his bachelor party and then ends up accompanying Watson and his wife on their honeymoon train journey. Holmes's jealousy of Mrs. Watson also adds to the fun.

The supporting cast is a mixed bag. Stephen Fry  provides some nice comedy as Sherlock's eccentric brother Mycroft. Rachel McAdams makes a short return as Irene Adler in what is basically a cameo appearance. The original girl with the dragon tattoo Noomi Rapace takes the female lead, but not in a romantic capacity. Her part feels thrown in simply to have a female character and she adds little to the story. They could have simply expanded Mrs. Watson's part since there isn't a hint of romance between Sherlock and Noomi's character. Jared Harris is fine as Moriarty, playing it more seriously than the rest of the cast.

While the first movie certainly had its moments of humor, here Holmes seems to reach new levels of campiness. He has become increasingly difficult to take serious at all. To continue the James Bond analogy, this is a Roger Moore Sherlock Holmes rather than a Sean Connery one. It entertains but the actual tension is never that high.

Ritchie films the story with great style. The flight through the woods while Holmes and Watson are being shot at and shelled  is a particularly well filmed sequence with great use of slow motion. There are also a repeat or two of Holmes analyzing a situation to "see" into the future that are cleverly filmed.

I still enjoyed this movie quite a bit, but not as much as much as the original. It's a fun romp, but a slight reining in of the campiness, particularly in Downey Jr.'s performance wouldn't have gone amiss. A return to a more traditional Holmes mystery rather than a bigger is better philosophy might also help the inevitable third film in the series. When it does come, I'll still go to see it, but without quite the level of excitement that I had for the original.

Although Scott wrote that Holmes is jealous of Mrs. Watson, I never noticed it.  Her part is fairly small and he hardly has any scenes with her.  Their big moment together is him saving her.  I am not sure how the jealousy comes in to play.

I agree that the best moments are still the interaction between Holmes and Watson.  Scott mentioned the great chemistry between Law and Downey Jr. and I agree.  This is best exemplified in a scene where they finish each others sentences.  "You're drinking embalming fluid?"  "Yes. Care for a drop?" "You do seem..."  "Excited?" "Manic."  and so on.

Watson's importance to the story seems increased.  He helps to find clues and holds his own against the bad guys.  He also saves Holmes more than once.  Their love/hate relationship is best described by Watson yelling at Holmes, "I know you can hear me, you selfish bastard!"

What I was also struck by was how much Guy Ritchie makes a modern political/economics comment on war.  The film begins with a series of terrorist bombings.  Moriarty wants to start a war so as to supply the weapons and the bandages.  He does not care who wins or loses, he just sees it as a way of making a ton of money.   This is something many modern politicians have been accused of.

As Scott pointed out, A Game of Shadows wanders away from the traditional Sherlock Holmes stories, so do the attitudes of the times.  Mrs. Watson is a woman before her time.  She casually handles a gun when an intruder busts into their train car.  She is unperturbed when she tells her husband to throw the man off the train.   Her character is somewhat interesting but she seems more like a modern policewoman who traveled back in time than a lady of 19th Century England.

No matter what Ritchie intended with this film, he did succeed when it comes to the action and pacing.  It clips along from one set piece to another.  I have only read one of Doyle's, Sherlock Holmes's stories,"The Hounds of the Baskervilles", and it did not have this kind of action.  This may not resemble the original Sherlock Holmes but it still makes for an entertaining watch.

Jude Law and Robert Downey Jr. in Sherlock Holmes: A Game of Shadows.

Eric, I understand what Scott refers to when he mentions Holmes' jealousy of Mrs. Watson. After all she has intruded on their longstanding partnership. Yes Holmes saves her but he also conveniently gets her out of the way (by pushing her off a speeding train high above a river) so that they can continue on their adventure (which is actually Watson's honeymoon!) without the bride's presence. Sounds like jealousy to me.

I ended my review for the previous Sherlock Holmes movie by saying, “Bring on the sequel.” Perhaps I spoke too soon. I didn't enjoy this installment nearly as much. Everything that seemed fresh about that movie now seems overdone. I was annoyed by all the slow motion photography. Note to Guy Ritchie: a little of that goes a long way. At the climax we not only have to sit through the gimmick of Sherlock peering into the future in order to fight Moriarty but we then have to watch the villain doing likewise.

I also agree with Scott that this seems much more like a Bond adventure than a Victorian era Sherlock Holmes story. That Swiss chateau perched high above that immense waterfall where the climax takes place is straight out of a James Bond movie. Hell there is even a Bond babe of sorts. She may not be presented as a sex object but her presence can only be explained because the filmmakers wanted a female character along for the ride.

The chemistry between Robert Downey Jr. and Jude Law remains intact. They alone make the movie worth the two hour run time. If they do make a third movie in the franchise they need to ratchet down the action a notch or two and dispense with some of the more overt campiness. Sherlock Holmes in drag for example. With a better script and less intrusive photographic techniques this Sherlock Holmes franchise still has life in it. 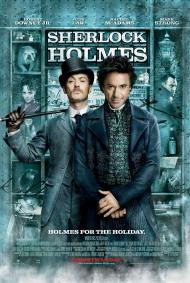