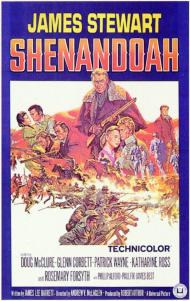 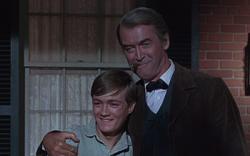 Stewart plays a single father of seven sons and one daughter. He plays the role of pacifist and isolationist. He chooses to ignore the battles that are, literally, going on around his farm. But when his youngest son, played by Phillip Alford from To Kill A Mockingbird, is mistaken for a Confederate soldier and imprisoned by the Union army, Stewart's father is finally pulled into the war.

This movie is socially a statement about war. At one point Stewart gives a speech about why he is not willing to fight this war. The problems in Vietnam were heating up in 1965 and I wonder just how contemporarily political the writers of this movie were being.

Also like The Sons Of Katie Elder, family members die in this movie. The theme of this movie is family. One of the brothers is married and about to have a baby. The daughter gets engaged. One of my favorite scenes in this movie is where Stewart gives his future son in-law, Doug McClure, some advice. At the same time, the bride-to-be is getting sound advice from her sister in-law, Katharine Ross from The Graduate. Watch this scene. There is some simple yet good advice here for couples.

A family drama with action, romance and some tragic events. A great cast, led by Jimmy Stewart as patriarch to a bunch of new actors of the time, makes this a great movie. 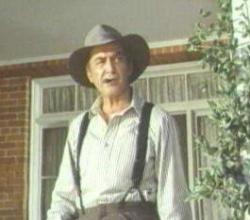 This movie is entertaining enough, provided you are not expecting textbook historical accuracy. In the scene where the Union soldiers capture the youngest son, they show black and white soldiers in the same platoon. This is historically inaccurate since the United States military was racially segregated until Word War II. I don't expect documented fact from a movie designed as entertainment; still I think it worth mentioning.

Just for the record Jimmy Stewart's character is never portrayed as a pacifist. An isolationist yes, but he never says he is against fighting for moral reasons. He simply feels no patriotism or sense of duty to the state of Virginia. Also, he has six sons, not seven as Eric has written.

The wedding advice scenes that Eric thought so much of are interesting in the fact that they show such an archaic view towards the emotional differences between the sexes. I suppose that it does represent the way that many men and women behave toward each other, and, in all probability, it is an accurate portrayal of the kind of advice that a Nineteenth Century farmer would give his future son-in-law, but at the same time it narrow-mindedly assumes that all men and women share these same personality traits.

Nonetheless, the story and characters are compelling, the cast is good, and the movie is beautifully shot with many sweeping vistas. I also liked the fact that some of the main characters get killed. In that sense it maintains a certain level of realism.

And like virtually all Civil War movies it contains moments of romanticized nostalgia and coincidental melodrama. Such as the scene with the stray cow wandering innocently out onto the battlefield between the two opposing armies as they stand poised to attack and right after that when the youngest son's life is spared by his black friend who has run off and joined the Union army. Being a sentimentalist at heart I always enjoy moments like these.

Shenandoah is easy to get caught up in and it features a true Hollywood legend late in a very great career.