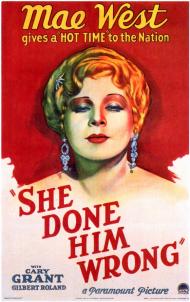 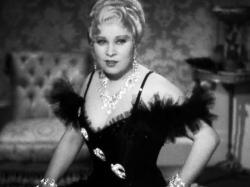 Mae West in She Done Him Wrong.

She Done Him Wrong was Mae West's 2nd movie and first starring screen role. It was adapted from her Broadway show Diamond Lil. West plays Lady Lou, a saloon singer in the Bowery section of Manhattan in the 1890's. As usual she strings along nearly every man in the cast, sings a few suggestive songs, and double entendre's her way through the dialogue. She Done Him Wrong was a huge box office hit and was nominated for Best Picture by the Academy.

One of her first lines is in reply to a woman and her son she meets on the street. The woman tells her son to always speak nicely to a fine lady. Mae replies, “I'm one of the finest ladies ever to walk the streets." Later she tells Cary Grant “Why don't you come up some time and see me?" This became her most famous line, in fact it was so good that she used it again in her very next movie, I'm No Angel, also costarring Grant. The AFI recently listed it as the #26 greatest movie line in American film history.

Mae West was not beautiful. She wasn't a great actress or singer. But she was one of the most original people in the history of show biz. She was decades ahead of her time in her views towards sex. She was often the sexual aggressor in her movies. The plots of which were never terribly important. They were but vehicles for showcasing her glorious talents.

Louise Beavers plays Pearl, Lady Lou's maid. Mae West always had witty repartee with her maids. In some ways these scenes seem racist in today's context but unlike many movies at the time where the black maids never even got any dialogue, at least Mae West engaged in lively conversation and seemed to have a genuine relationship with hers. Louise Beavers' most famous role would come the very next year in the original version of Imitation of Life.

In October of 1933, just six months after this movie's release The National Legion of Decency was formed. Reportedly Legion officials cited Mae West as one of the reasons for the groups formation. She definitely pulled no punches with her film content. In one scene in this movie she goes to visit one of her old boyfriends in jail. As she walks by the cells every prisoner recognizes her and speaks. As she passes one cell two men are standing cheek to cheek with their arms around each other, they call out, “Hello Lou!" As she passes Mae West calls them, “The Cherry Sisters." Hilariously referencing the notoriously unnattractive vaudeville sibling act while making a subtle gay joke at the same time.

She Done Him Wrong has very little plot. Lady Lou gets mixed up with several different men. All of whom are madly in love with her. The only exception being Cary Grant's character. He turns out to be a detective but at the beginning of the movie is undercover as a missionary next door to the saloon Lady Lou sings at. The owner of the saloon is involved in a counterfeiting operation and Grant is in charge of the sting to catch him. Of course at the end Grant's detective inexplicably falls for Lady Lou. Surprise, surprise. 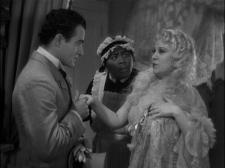 There really is nothing to this movie. The plot is little more than a vanity piece for West. The first few minutes has everyone discussing how great her character is. Her first line is good though. Patrick did not get the quote quite right. She says to the woman who just called her a fine woman, “Finest woman that ever walked a street.”

This is one of Cary Grant's first notable roles, but he is lost among the cast of admirers vying for Lou's attention. His role could have been played by anyone.

In fact, the only thing even mildly entertaining about She Done Him Wrong is West’s personality. She was big and bawdy. She was a true original. By today’s standards she is completely tame, but in her time, she could set ears on fire with just her suggestive looks. Several times she leers at Gilbert Roland like a starving man looks at food.

Movies in those days showed some loose woman and gold diggers. These were women who used men for money and to get ahead. West flirted and teased men for the fun of it. Or as she says of men in the movie, "I happen to be smart enough to play it their way." 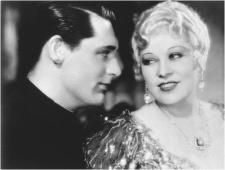 A young Cary Grant and Mae West in She Done Him Wrong.

Mae West is one of those truly iconic classic Hollywood stars and yet until I sat down to watch this movie, I'm pretty sure I hadn't actually seen any of her movies. I'd seen clips of course, but never a full length film.

She definitely has personality and pizazz, but I certainly couldn't detect any sex appeal about her. Maybe it's because she started her movie career so late. She was already pushing 40 in this film. It appears that the movie is trying to be sincere when it shows every man in the movie panting after her, but to me it just seemed unintentionally funny. What Grant's character in particular sees in her is truly baffling.

Clearly her appeal is her forward attitude about sex. She's not only open to the idea, she seems downright encouraging. I suppose it's refreshing to see a strong-minded, sexually liberated actress in this era, but at the same time it doesn't make her any more beautiful or even attractive. She just looks like a drag queen to me, but then that might be because all drag queens are inspired by her and it's unfair to make the comparison since she was the original.

As a fan of Cary Grant I was curious to see him in such an early film, but you're right Eric, he does nothing special here, and he doesn't share a chemistry with West. Any decent looking actor could have played his part. I certainly didn't buy into the idea that his character would suddenly propose to her at the finale.

This is not a good movie. Any scene that doesn't feature West is yawn inducing. It's a very short film, but it feels longer. As a vehicle for West and her snappy comebacks it works, but as an actual movie it's severely lacking.