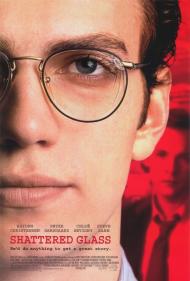 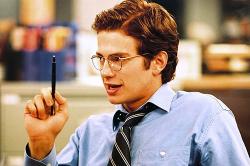 Back before anyone had ever heard of Jayson Blair and his plagiarized stories for the New York Times, Stephen Glass was the star reporter for 'The New Republic' magazine. You may not be familiar with the magazine, its circulation is less than 100,000, but it's known as 'the in-flight magazine of Air Force One'. In the mid-nineties, the median age of the staff at the magazine was 26, with Stephen Glass being the youngest. By 1998, his star was rising as one of the best young writers around. In that same year however, he was fired after it was discovered that 27 out of the 41 stories he wrote for 'The New Republic' were either entirely or partially fabricated. Shattered Glass tells his story.

The script, adapted by its director, Billy Ray, from a Buzz Bissinger Vanity Fair article, is brilliant. It is structured in such a way that at the beginning of the movie Stephen Glass is the hero of the piece. He's young, successful, and telling his story at his old high school to a journalism class. Seemingly, the villain in the piece is Chuck Lane (Peter Sarsgaard), Glass's stoic rival at the magazine, who takes over the post of editor from the very popular, but fired, Mike Kelly (Azaria). Halfway through the story however, you come to realize that the roles are really reversed. It is solid, dependable, and ultimately responsible Lane who is the real hero here.

As is often the case, it is Christensen as the villain, who has the best part. After seeing him in Attack of the Clones, I was expecting very little from his performance. As a result, I was completely blown away by his acting here. His childish, petulant Glass is brilliantly played. His continuous cries of “Are you mad at me?" and “I said I was sorry." show a child in a man's body who tries to wheedle his way through life by ingratiating himself to everyone. It's an award worthy performance.

While a movie about the inner goings on of a staff of writers might seem rather dull, believe me this movie is not. The pacing is great, the script is witty, and the acting is rock solid with not a bad performance in the bunch. And even though you are well aware of how the movie ends, it keeps your attention throughout. I watched with fascination and scorn as Glass's lies unwound around him.

Ironically, Esquire had planned on having Jayson Blair write a review of this movie. When a fuss was raised and the element of surprise removed, Esquire backed down on its offer to Jayson. It's a pity really; this movie is a lie within a lie, how interesting it would have been to have another liar review it. 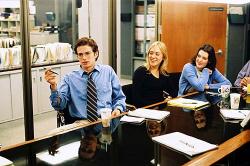 What I found most fascinating about this thoroughly entertaining movie was the psyche of the central character, Stephen Glass. Was he just a really imaginative liar trying to advance his young journalistic career or was he actually delusional? At first glance it would seem the former since he actively tried to cover his tracks once the online magazine got wind of his fabricated article on computer hackers. A seemingly sane response. Still you have to ask yourself how such a brilliant young writer could think he'd get away with falsifying stories for a respected magazine like The New Republic. Perhaps the risk was part of the thrill. And once he got away with the first lie he probably started to believe he was somehow smarter than the rest of the world. Still, it would seem that any rational person would realize he was setting up a house of cards. Let's face it, he was just an attention junkie strung-out on being the clever young ace reporter admired and envied by his coworkers.

As Scott mentioned Hayden Christensen is great in this part. It's a cinematic treat to watch him squirm as his lies unravel. Time after time when it seems he is found out he manages to string his editor along a bit farther. He even goes so far as to create a fake web site and have his brother impersonate a source over the phone.

Stephen Glass should have written short stories instead of becoming a journalist. But then talent is no indication of emotional maturity as Shattered Glass so vividly illustrates. 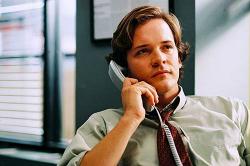 For me, Shattered Glass best illustrates that George Lucas is one of the worst directors working. Having only seen Christensen in the Star Wars movies, I figured this guy was just a bad actor getting by on his looks. But after seeing Shattered Glass, I realize that he can act very well and that Lucas does not have a clue about how to direct real actors.

When the story of Stephen Glass first broke it was shocking that our news could be fabricated. Since then we have had Jayson Blair's lies and Dan Rather's political bias. We have many online websites that provide information faster than ever before. Glass's story marked a change in the news media business. Sure he was not the first media person to lie, but he was the first to do it in a world filled with media outlets waiting to pounce on a competitor.

Shattered Glass attempts to walk a fine political line. It does not wander too far to the right or left. It does however, bring up a fabricated story about drunken young Republicans several times. A quick look at some headlines on their online magazine website and I see that they are consciously trying to be middle of the road politically speaking.

Shattered Glass works as an expose on the fact that everything one reads must be taken with a grain of salt. We all look at the headlines about movie stars in the Tabloids and think how made up most of these stories are. Why did it take us so long to come up with a similar conclusion about real news articles? Maybe it is just too hard to explore the truth. Maybe it's just easier believing what's in front of us. Maybe Chuck is onto something when he says in the movie, "He handed us fiction after fiction, and we printed them all as fact. Just because we found him entertaining."