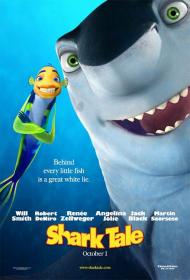 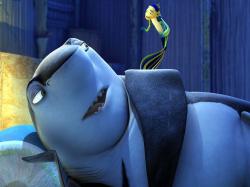 With all the talent involved, I expected Shark Tale to be much better than it turned out to be. The creators of Shrek and Shrek 2, with the voices of Will Smith, Renee Zellweger, Angelina Jolie, Robert DeNiro, and Jack Black, among others, should surely have been able to spell success. And while there are some jokes that work and the story is enjoyable enough, the movie never quite gels and just seems as though it's trying too hard for too little results.

Will Smith stars as Oscar, a little fish who dreams of making it big in the undersea equivalent of New York City. When everyone mistakenly believes that he killed a shark, all of Oscar's dreams become a reality as he becomes the toast of the town. Unfortunately for Oscar, the dead shark is the son of the local mob boss (DeNiro) who wants revenge for the death of his son. Meanwhile, DeNiro's other son; Vinnie (Black), has come out of the closet as a vegetarian. With both of them facing the Don's wrath, Oscar and Vinnie eventually join forces.

While most cartoons contain at least a few jokes for the adults, Shark Tale is filled with humor that will go over most children's heads. The Godfather, Scarface, Jaws, and other movie references from 20 to 30 years ago are hardly going to be familiar to children of today. The in-joke of having DeNiro and Scorsese doing scenes together will be completely lost on them. Being a cinephile definitely helps in appreciating this movie.

The movie references are so prevalent as to become almost annoying. When Oscar is pretending to beat up Vinnie to convince the townspeople that he really is a shark slayer, he begins spouting famous movie lines that have absolutely no bearing on his situation at all, including "You had me at hello," which allows a quick cutaway to Zellweger's character giving a quizzical look, but makes no sense in the context of the story. Where Shrek 2 was filled with pop culture references that worked to good effect as part of the story, here they just seem to be there for the sake of being there.

That isn't to say that the movie is devoid of humor. Jack Black does a very funny turn, as the vegetarian shark that likes to dress up like a dolphin. And there's a quite funny moment involving shrimp. Overall though, the movie just isn't as funny as it could have been.

If Shark Tale proves anything it is that just throwing as many famous voices as you can into a cartoon, won't make it a success. You need a script that relies upon more than just references to other movies. Without such a script, all you're left with is a very expensively cast mediocre cartoon. 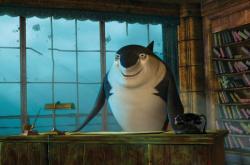 "...it's trying too hard for too little results." Sums this film up perfectly. Perhaps there should not have been two directors. So much happens at once that it is hard to keep up. I asked both of my sons, after the movie, if they understood the plot. Neither had a firm grasp of what actually happened on screen.

This film should have gone lighter on the psychology of relationships. We have a three way love story right out of the old classic Blood and Sand. The nice girl is in love with the average boy. Then the average boy becomes famous and takes up with upscale slut, only to later realize the nice girl was the right choice. This movie explores the relationship between a hard-nosed father and his, lets be honest, effeminate son. This movie explores the friendship between two fish that are supposed to be predator and prey. This is an animated family film! Lighten it up!

The worse aspect of this film is that there is no one to root for. Sure, Oscar is the "hero," but he is so selfish, irresponsible and annoying that he is almost unlikable. He is behind on $5,000 worth of loans that he appears to not take seriously. His only dreams are to be rich and famous, and he does not care who around him he may hurt in the process. Of course, by the end of the movie he discovers that happiness does not necessarily come with money and fame. Is that supposed to be some moral? It comes across more as a political motto, "Take pride in being working class."

Shark Tale has great animation and an amazing cast. My favorite is DeNiro, who plays up all of his gangster roles. With so much going for it, this film should have been better, but then, sometimes, less is more.