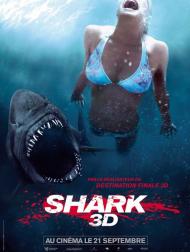 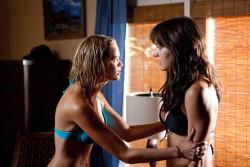 Sara Paxton and Katharine McPhee in Shark Night 3D. If you look closely, you can actually see their careers dying right in front of your eyes.

Did you ever smell something so bad that you wanted everyone around you to smell it too? That's how I feel about Shark Night 3D. It's so bad that I almost want other people to see it too so that they can see just how bad a movie can be. The only thing is, I'm not that cruel. I would never recommend anyone waste their money on this movie. It would only encourage the filmmakers to make more movies.

I went into this movie expecting something along the lines of last year's similarly themed Piranha 3D. You know, silly and over-the-top with tongue in cheek blood and carnage with some tits to add to the distraction. I mean both that movie and this one are about killer fish in a lake feasting on college students. However, as unlikely as it might sound, that's where the similarities end.

Where Piranha 3D was rated R and well aware of how stupid it all was, Shark Night 3D is rated PG-13 and takes itself completely seriously. The writers, directors and - most of all - the poor cast, seem to think they're making a drama. And with the PG-13 rating, the gore is kept very much to a  minimum and even worse, there is absolutely no nudity. In short, there isn't a single redeeming feature in the whole film.

The plot - if you really must know - is quite basic. A group of college students take a break to the island home of one of their parents in the back of beyond in Louisiana. It's a house that features all modern amenities except any means of contacting the outside world. Their phones won't get signals and the house has no form of radio of any kind. Almost instantly they begin to be picked off one by one by a horde of sharks that are mysteriously living in this salt water lake. Apparently they're the only ones on this huge lake because the sharks don't bother anyone else and no one else reports any shark activity, despite there being several, quite large, sharks in the lake. And not just any sharks, but sharks that are able to chase down a speed boat and knock out the engine. Sharks that will bite off a man's arm, but not swallow it.

In between the shark attacks we are treated to some horrible dialogue and some poor acting. There's a subplot with Sara (the local girl) running into an ex-boyfriend with whom she shares a violent past that may (okay, does) have something to do with the sharks. One of the students is a soon-to-be football star and he's going to get engaged to one of the girls they brought, while yet another of the students has a crush on another. It's all so boring and generic that I'm yawning just rethinking about it.

The only laughs to be had in the movie are at just how bad some scenes are. The football player gets his arm bitten off, but that doesn't stop him from wading into the water at one point and killing a shark with a spear. The most over-the-top shark moments involve sharks leaping out of the water, including one who picks one of the students cleanly off of a wave runner. The only truly violent and disturbing scene is when one of the girls is knocked into the water and attacked by several small sharks, only the way it's filmed isn't fun, but violent and sadistically voyeuristic. These scenes aren't played for laughs, but quite earnestly.

I'm pretty sure I'm not conveying properly just how bad this movie is. Like that really bad smell, you have to experience it to really appreciate just how much it stinks. Only I'm begging you not to bother smelling for yourself, just take my word for it. If it helps in your decision, you should know that it's directed by the man who directed Snakes on a Plane. 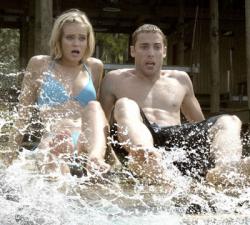 Sara Paxton and Dustin Milligan in Shark Night. If you look close, you can see an attempt at acting.

Yeah, Shark Night is a truly horrible film. First of all, it takes place as much during the day as it does night. The acting is mostly pathetic. In an early scene, an over acting Sinqua Walls tells an adequate Dustin Milligan about what he knows about Sara’s dating past. He says he never saw her date anyone but her dog. He should have said it off the cuff or even with a wink and a smile, in an attempt at a dirty joke but instead delivers his lines with all the seriousness of a soap opera actor.

Scott mentioned Malik (Sinqua Walls) having his arm bitten off and still being able to attack and kill a shark. What Scott did not write was that shortly after he has his arm removed, Nick (Dustin Milligan) a med student, states that Malik only has about two hours before he will bleed out and die. Well more than two hours later, and after surviving an exploding boat, he is still, not only conscious enough to have conversations, but able to battle the shark and take a ride on a wave runner.

I will also add to Scott’s comment about the sharks that swim faster than speed boats and wave runners. Your average shark cruises at 5 mph but can reach 12 mph when feeding. Your average speed boat pulling a wake boarder is about 20 mph. Your average wave runner runs at 30 mph with high end ones bragging to make well over that. Now here is the punch line. The sharks can do fantasy feats of speed when chasing water craft but cannot catch up to a swimming Nick.

Of course anyone who has ever gone to the movies knows Nick is not going to die. We know this from the first time we meet him studying in his dorm while his roommate is wasting his time playing a video game. Yeah, who will live and who will die is established early on. Riddle me this? Which chick dies in a horror film, the “good girl” or “the slut”? Anyone who saw Scream (1996) knows that answer.

The special effects are just as bad as everything else in the movie. The CGI sharks are less convincing than a muppet. I saw this in 2D, so perhaps it looks better in 3D. Even if it does, the special effects could not possibly make Shark Night any better. Now if you want to talk about a rewrite and a different director, there may be some hope.