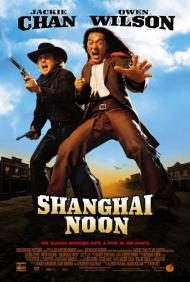 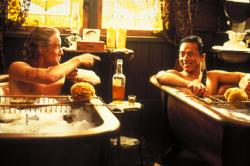 Jackie Chan is one of the only movie stars currently working who seems like an old time actor. Like Buster Keaton and Douglas Fairbanks, Chan does most of his own stunts. Like John Wayne, he always plays the same good guy in all of his movies. A good guy who just happens to find himself in situations to do karate. This is his charm but, it also sets strict limits on his acting.

This is demonstrated in Shanghai Noon. Much like the Rush Hour movies, Chan is partnered with an American smart ass. The movie is fast paced and rather funny. The title is a take on the classic western High Noon. Chan's character's name is Chon Wang, when spoken it sounds like your saying John Wayne. Yeah, they have a few jokes about that.

Chan plays a royal guard sent to the American wild west to save a kidnapped princess, Lucy Liu. Along the way he teams up with Wilson's outlaw. They bar brawl, battle Indians and outlaws, and a whole lot more in this action packed comedic western.

That is the limit of Chan's acting in American films. His characters are always soft spoken, likable, well mannered martial artists. The reason his team up movies works so well is because it takes another actor to fill the void that Chan's limited acting always creates. Like an old Gene Kelly film, you watch Chan's movies waiting for the next scene where he shows off some fancy foot work. In between fight scenes, his costars need to be entertaining and charming enough to make up for his lack of acting range. Wilson's subtle, comedic delivery fills it nicely here. I just wish Chan could break that acting mold he's stuck in.