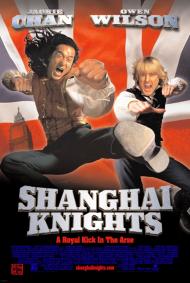 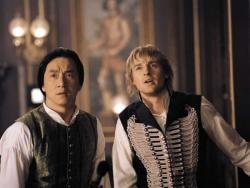 Shanghai Knights is that rare sequel that equals the original. It is as funny and entertaining as its predecessor. It also adds a new angle to the series by having cameos by actual historical people, even though their presence is often inaccurate.

Chon Wayne (Chan) and Roy O'Bannon (Wilson) journey to London, England to help Lin, Wang's sister, revenge Wang's father's death. A British royal responsible for their father's death and a Chinese royal are scheming to each take the thrones of their respective countries by murdering those in line ahead of them. Of course Chon, Roy, and Lin set out to foil their plans.

Along the way these fish out of water meet a street urchin named Charlie Chaplin. They get help from a wanna be writer named Arthur Doyle. Chon's sister Lin fights off a serial killer in a foggy street. The boys even end up meeting the Queen after falling from the minute hand of Big Ben.

The film is fast and funny. Chan provides the fast and Wilson provides the funny. Chan is elegant as ever in his fight scenes. In one fight he uses an umbrella as a weapon as the soundtrack plays the music to 'Singin In The Rain'. Wilson's delivery is excellent. After having the British royal bad guy call Americans 'uneducated red necks,' Roy says, 'What's with the personal attacks? You don't see me making any comments about your pasty complexion or snotty accent.'

A truly fun film to watch. It holds no meaning or great symbolism. It is just plain, good afternoon matinee entertainment. 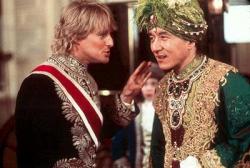 I agree wholeheartedly with Eric's last line. This is good matinee entertainment. On the other hand, if I wished, I could go on about the incredibly inaccurate ways in which the time period is represented with just the dialogue alone. Wilson's Roy, for example, uses phrases that weren't around twenty years ago let alone in 1887, when Shanghai Knights is set. He says things like, 'This country blows.' Or 'I'm gettin' ready to launch a little thing called operation sweep her off her feet.' And somehow I don't think a well brought up 19th Century Chinese girl would call anyone – not even Jack the Ripper – a 'Fucking loser!' Also they have their years all mixed up. Charlie Chaplin wasn't even born until 1889. But if I were to point out all of these obvious flaws I would be missing the entire point of this movie. Mindless entertainment.

As such Shanghai Knights succeeds. And as Eric said, Jackie Chan provides the thrills, while Luke Wilson supplies the laughs. They make a good buddy team. Chan gives me the pure joy of screen movement that I haven't seen since the day's of Harold Lloyd. He is, in fact, very much like a silent movie star. And, like Eric, I enjoyed the Gene Kelly tribute. Wilson is funny. He knows how to deliver a line, like when he says to his partner, 'Just be glad I didn't invest the gold in that automobile industry. Like that will ever be big.' His, is reminiscent of Bob Hope's on-screen persona.

So overlook the historical innaccuracies and the predictable clichés, put aside your worries, and spend a few carefree hours with Shanghai Knights. I can think of worse ways to spend a Sunday afternoon. 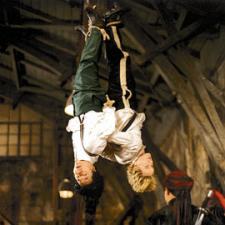 Wilson and Chan have comic chemistry, but did they have to turn history upside down?

This movie is crammed with inaccuracies! Sure, it's just a comedy, but there's so many of them, that I actually got kind of annoyed with them all, especially when the brief titter of recognition hardly seemed worth the error. Along with the ones Patrick mentioned, Arthur Conan Doyle never worked for Scotland Yard, he was a surgeon. Jack the Ripper didn't strike until 1888. The car they drive is far too sophisticated for the time period, as cars didn't even have steering wheels for almost another 20 years. Roy mentions investing in motion pictures in California, 10 years too early to invest in movies, not to mention the movie business started on the East Coast. I know, I know, these are all nitpicks, but c'mon writers, at least pretend like you've heard of a history book or Wikipedia, for Christ's sake.

Okay, so yeah, this is an entertaining movie, or perhaps more correctly, Jackie Chan and Owen Wilson are entertaining in this movie, because to be honest I didn't find the plot very interesting or compelling, but Wilson and Chan have a playful chemistry and they make individual scenes entertaining. The Singin' in the Rain bit is good, but really all of Chan's stunt work is amazing, especially when you consider he was in his late 40s when he made this movie and he still moves like a cat who just drank a Red Bull (and I'm almost surprised Roy and Chon weren't shown drinking one of those). And Owen Wilson uses his California dude charm here, as he does in almost every part he's ever played. It's practically impossible to imagine Owen getting truly angry. He's so laid back.

While the stunt work is good, there's never any real tension, which might not be such a problem if they knocked off about 30 minutes from the running-time. At two hours, this lightweight flick is far too long. It's possible to create tension without losing the comedy. Look at a movie like 1999's The Mummy. That had laughs and yet some genuine tension as well, which is much more than this one has.

Sure, there are worse ways to spend a couple of hours than watching this, but there are also a hell of a lot better ways too.