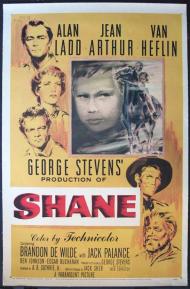 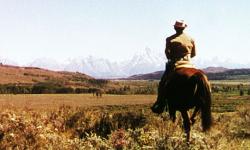 It would be so easy to dismiss Shane as a simple, slow paced, beautifully shot Western.  Its story is one that has been done so many times that it's a cliche.  A lone gunman looking to put his past behind him, rides into town where he ends up donning his guns again in defense of the good townspeople against the hired guns of the local cattle baron.  And yet, while the plot is deceptively simple, there seems to be so much more going on just below the surface.

From the moment little Joey yells, "Somebody's comin', Pa!" and we first see Alan Ladd as Shane coming riding onto the Starrett homestead there's something of a mystery about the diminutive stranger in the fringed buckskin.  That he's a gunfighter with a past is obvious, but the details of that past are never revealed to us and just where he's coming from and where he's going is never made entirely clear.  Through little Joey's eyes, which is how we see nearly the whole movie, he's the ideal hero and any sin is instantly forgiven, but you can't help but feel there are a few dark deeds in Shane's past.

After Shane steps in to help defend the homestead, he's invited to stay where he quickly becomes attached to the family.  He's hero worshiped by Joey, befriended by Joe and shares an unspoken chemistry with Marian (Jean Arthur in her final screen role).  Joe notices the bond between his wife and the handsome stranger, but trusts both of them not to take it any further.  Even little Joey inadvertently comments on it when he tells Shane, "Pa's got things for you to do. And Mother wants you. I know she does!"

There's more talk in this movie than you'd normally get in a Western.  More talk than gun fighting, certainly.  Starrett and Ryker, the cattle baron who resents the new homesteaders fencing in the range, have an argument over who has what right to the land.  Not only does it sum up the reasons for the range war, but it's also historically accurate and sums up the settlement of the west pretty well.

Ryker, for all his ruthlessness, shows restraint compared to your typical black and white western.  He tries intimidation, but this isn't a movie with a high body count.  It's only after Shane and Joe show they're willing to physically standup against his men in a fistfight that he decides to bring in a hired gun.

A young Jack Palance, dressed all in black, makes the perfect western bad guy as the hired gun.  He has only a handful of lines, but he looms menacingly whenever he appears on screen.  When Ryker says, "I'll kill him [Starrett] if I have to.", Palance gets one of the best lines in the movie when he says (in that Jack Palance voice), "You mean, I'll kill him, if you have to."

Naturally all this talking leads to a final gun fight where Shane must pick up his guns and do what he can't let Joe do because he knows once the killing is done, the killer will have to leave.  And so Shane does what we know he will do all along and what we sense he's known he will do all along.  Whatever Shane's past, it's obvious that settling down as a farmer was never his fate and that this was just a rest stop on his violent trail.

Ladd underplays Shane.  He's sort of a 1950s precursor to Eastwood's Man with No Name.  No attempt was made to hide Ladd's height, which according to reports was anywhere from 5'5" to 5'9".  Palance towers over him yet Ladd has never stood taller.

Shane is beautifully shot on location on the plains of Wyoming, with the Rockies looming in the background.  The desert shots with cactus and piled rocks so typical and cliched in old westerns are nowhere to be seen.  It creates an added sense of realism as does the climate, with the rain and the mud.  Several scenes take place at night in near darkness with the actors only seen in silhouette.  It's no surprise that it won the Cinematography Oscar.

The final scene is a classic.  It's so famous that I don't feel it's a spoiler to talk about it.  Shane, wounded from the gunfight, rides off into the night with Joey shouting after him, "Shane! Come back!"  He's so full of longing that it gives the moment added weight.  Is he just trying to call back Shane (from the dead?) or is he trying to hold onto his childhood and his innocence?  And are we the audience longing to do the same thing? 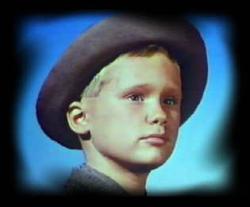 Scott you did a brilliant job summing up this movie. I don’t disagree with anything you wrote. I will add that the entire cast is good. Van Heflin brings a realism and easy going naturalism to the father Joe. I really enjoyed the interaction between him and Joey. He isn’t bothered by Joey’s idolization of Shane because he knows it will be fleeting and that he and Joey have a much deeper connection.

Joey asks those age old boyhood questions of his father. “Pa, can you lick Shane in a fight?” “Pa, are you a better shot than Shane?” The Starrett family is very believable as is the entire homesteading community.

Hollywood legend has it that Jack Palance invented the way for a villain to dismount from a horse: very slowly lowering himself to the ground in a menacing manner. The story is that Palance was actually terrified of horses. Whether or not this is true it makes a great anecdote and it adds an interesting quirk to the character of Wilson.

Oh and Scott the answer to your question is yes to all those things. Joey represents our collective lost childhoods. You can just picture him years later as an old man telling stories about the pioneering homesteader days and the fading of the Old West. But mostly he will tell about the summer he knew a gunslinger named Shane. 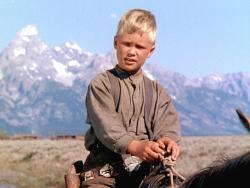 At first I almost did dismiss Shane as a simple, slow paced, beautifully shot Western, but it truly is so much more.  First and foremost, is that it is a huge heaping pile of American pride.  What could be more American than a man and his wife wanting to own their own place and raise a family on it.  It is the American dream.  Early in the movie, Marian even serves apple pie for dessert.   The patriotism builds to a swell during a Fourth of July celebration.  If you want to show a foreigner how America was built, show them Shane.

Far more subtle is the religious aspect.  Is it just a coincidence that the parents are named Joe and Marian (Joseph and Mary)?   Shane is a Christ figure.  He sleeps in a manger.  He performs little miracles for Joey, such as helping to get rid of the stump and shooting the rock.  Early on he turns the other cheek when confronted in the saloon.   The guy who at first made fun of Shane eventually befriends him as if the mere goodness of  Shane changes him.  The biggest Christ moment is near the end when Shane steps in for Joe.  Like Jesus being tortured on the cross for mankind's sins, Shane takes Joe's place and commits the sins for him.

Although Alan Ladd plays the enigmatic Shane, Brandon De Wilde steals the movie out from under Ladd and everyone else.  De Wilde was nominated for an Academy Award for best supporting actor.  He continued to act and 10 years later had a supporting role in another classic film, Hud (1963) starring Paul Newman.  Like many 1950s icons, De Wilde was not long of this earth.  He died at the age of 30 in a car accident, but Shane made him immortal.  He will forever be that little boy yelling desperately to Shane, as he rides away through the graveyard.