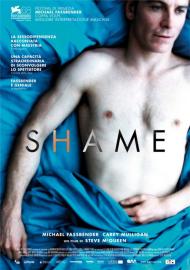 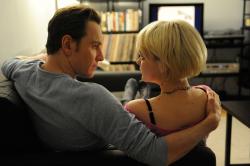 Shame, from British born writer/director Steve McQueen, offers a bleak look inside the life of a successful Manhattan thirty-something with a sex addiction. Michael Fassbender gives one of the year’s most gut wrenching performances as the impeccably attired and outwardly charming Brandon Sullivan. Just beneath his highly polished veneer he’s a man drowning in loneliness and despair. This is Fassbender and McQueen’s second movie together following 2008’s Hunger.

Carey Mulligan matches Michael Fassbender in intensity. The body language between brother and sister more than hints at a history of incest; and although we never learn the details about their past, we clearly get the picture. The most telling bit of dialogue comes when Sissy leaves her brother a desperate voice message saying, “We’re not bad people, we just come from a bad place.”

The movie has a gritty look to it and features a resident’s eye view of the city. It takes the viewer to places around Manhattan that very few tourists get to see. McQueen’s style includes lots of lingering shots. He paints stills with his camera and utilizes the close-up to good effect. There is one especially intense shot of Fassbender’s face as he has sex. You can see the pleasure of the approaching orgasm but also the emptiness and pain in his eyes. It is a brilliantly acted moment.

The movie earns its NC-17 rating with plenty of full frontal nudity and graphic sex. Fassbender’s penis nearly deserves a credit of its own. The story climaxes (pun intended) with Brandon going on a sexual bender that includes sex with men at an underground sex club and a three way with two women.

The story moves at a deliberate pace. Anyone looking for a happy ending (or any real resolution for that matter) will be disappointed. Shame is a slice of life snapshot of one man’s sex addiction over the course of one week. It is content simply showing the symptoms, which it does vividly and poetically in Brandon and Sissy's behavior, but without delving into the causes or solutions. Therefore Shame raises more questions than it answers. It features great acting and a consistent art-house visual style but the story itself ultimately left me feeling dissatisfied. But perhaps that was the director’s intention… 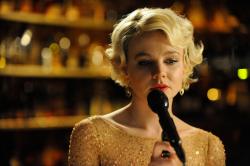 While sex addiction has become a joke as something men claim to have when they're caught cheating, this movie depicts something quite different. Brandon's life is consumed by sex. He has sex with a prostitute and then masturbates in the shower. The hard drive on his work computer is filled with hardcore pornography and he slips into the men's room to masturbate multiple times a day. When he gets home he immediately turns on his laptop to more pornography. The one time in the movie that he goes on a date and then tries to have sex in a normal relationship, he is physically unable to do it. This is a man with some very real and very serious issues.

As Patrick said, there is no resolution to this movie and hell, there's very little plot. This is an atmospheric character study of a disturbed man and his relationship with his equally disturbed sister. The background of these two fucked up individuals isn't detailed, but as Patrick said, the hints are of some form of incest or sexual abuse. When Brandon surprises Sissy in the shower, she remains completely naked in front of him even after he hands her a towel and later she wants to spoon with him in his bed. When Sissy catches Brandon masturbating, they get into an argument that ends with Brandon straddling her in just a towel.

The story moves at a snail's pace with each scene lingering longer than is necessary, some of them interminably so. It very much feels like a short stretched to feature length. By the end of it you will really feel as if you've spent a week with these characters. Director McQueen does create atmosphere, but at the expense of nearly everything else.

It is only the performances by Fassbender and Mulligan that keep this movie from being a completely pretentious arthouse snoozefest. They somehow make these two deeply wounded characters watchable and very human. Fassbender carries the movie, appearing in absolutely every scene and he brings an intensity to the part that helps to overcome some of the movie's flaws. Mulligan is equally good and is cementing herself as a great actress. Without such talented actors in these parts, I'm sure I would have checked out of this movie shortly into it.

Although they can't completely salvage a movie peppered with the self indulgence of a director in love with his own ability to frame a shot, they certainly do help. This is not a great movie, but it does feature a couple of powerhouse performances. 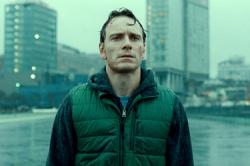 The scene where Mulligan sings "New York New York" is also revealing.  The song is one of hope, of going to a new place and starting over.  Brandon cries during this song as it speaks to him of clearly trying to get beyond his and his sister's dark past.

Patrick mentioned Fassbender's penis, or prosthetic, I have no idea which it is.  In an early scene he does a nude scene where he walks right by the camera that is at crotch level.  It is a bit gratuitous but I believe the director is trying to show that this guy is in good shape, so his need for constant sex is not based on some physical insecurity.  It is either that or he just wanted to get Fassbender naked.

Brandon associates sex with being dirty and wrong.  He can bang a whore or a girl he steals from another man at a bar, but when confronted with a woman who has some genuine feelings for him, he goes limp.   Everything about him sexually goes back to his sister.  I believe they shared a sexual relationship that they later came to realize was wrong.   Due to feeling shame, she started cutting herself and went on to have relationships with unavailable men, while he has sexualized his life to the point that it is all he has.

The scene where they talk on the couch is full of passion and unspoken regret.  She is begging him to be close to her, while he wants her to go away.  They speak with their faces inches from each other, but they may as well be miles away.  Neither brings up details of their past.   They are in love with each other as no brother and sister should be.

We must guess at the details of their past.  Fassbender is eight years older than Mulligan and in one scene Sissy points out to Brandon that he has a grey hair.  It was intended for us to know that Brandon is older. Why?  Was he the one to initiate the sexual relationship?  It makes sense.  Early on he ignores Sissy's calls.  Her presence is a walking reminder of what he did.  He cannot bare the shame she reminds him of.

No matter how many women Brandon bangs or how often he jacks off, he cannot forget the intimacy he once had with Sissy.  His trip to the gay club for a blow job and the three way are just other attempts to erase the memory of sex with other sex.  Only during meaningless sex is he free from his guilt.  Brandon's only problem is that once he ejaculates, he is left with his empty feelings of remorse.