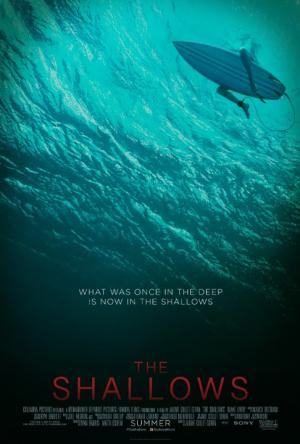 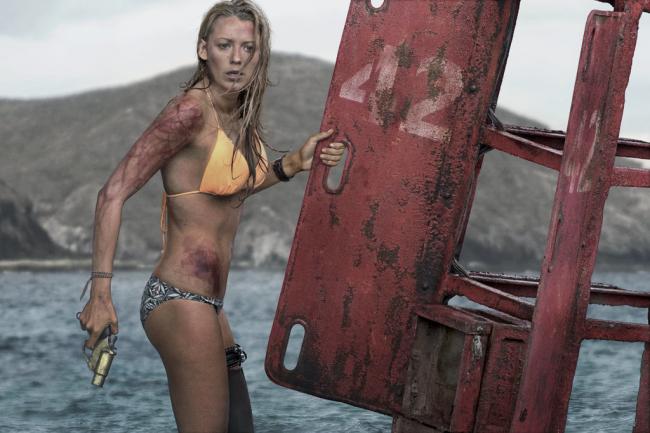 Blake Lively in The Shallows.

The Shallows is a taut little thriller that clocks in under 90 minutes. With a very small supporting cast, it is a one woman show for Blake Lively who does excellent work in the lead role. It works as a sort of antidote to the bloated blockbusters currently filling up multiplexes by showing that sometimes less is most definitely more.

Lively plays Nancy, a med student whose mother has recently died. As a result, Nancy is questioning her life decisions and taking a break to travel the world, including a visit to a secluded Mexican beach that was a favorite of her mother's. She spends the day surfing with a couple of locals, but when they leave, and she goes out to catch just one more wave, things take a darker turn. Past the breakers, she discovers a floating whale corpse, which is being fed upon by a great white shark. The shark quickly turns its attention to her and Nancy ends up badly bitten and clinging on top of a rock, which is where she spends most of the rest of the movie.

This simple setup allows for plenty of tension and drama. The proximity of the shore is tantalizing, but might as well be miles away for all the good it does Nancy. She is able to use her medical skills to tend to her wounds and her wits to keep herself alive, something that becomes more difficult as the tide rises over the top of her rock. And for the most part, the story keeps the action within the realm of believability. It isn't until the finale that it goes full Hollywood, but it's still a satisfying ending anyway.

I've never been particularly impressed by Blake Lively before now. She delivered serviceable performances in her earlier roles, but not much more. This time around though she is terrific in the part. Her California girl good looks make her a natural as a surfer and the camera isn't shy about admiring her body, especially in the film's early scenes. When the action starts, Lively keeps the film grounded and centered on herself, making the audience care and keeping them rooting for her to survive as hardship is piled upon hardship.

Sometimes, as this movie proves, you don't need a complicated script or a detailed backstory. Here we learn just enough about Nancy to make her human and the action tells the rest of the story. The quick pace and short running time make this perfect, lightweight, summer entertainment. 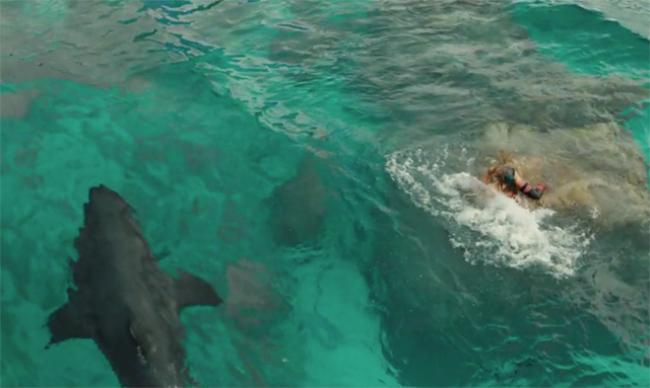 Who knew sharks were so patient.

Yeah, The Shallows is best described as lightweight entertainment. So light, in fact, that you can explain the plot in five words, "shark traps surfer on rock." Sure, this creates some tense and scary moments, including one that is shown three different times. We watch and wonder what we would have done in her situation. I also wondered why this shark was so distracted by this skinny human when it had an entire whale carcass to gorge itself on?

While I am discussing the shark, I have some questions. Is being patient a natural shark trait? He knows he cannot reach her as she is on the rock but he decides to stay close by for hours, just in case she slips in. Does he know about the tides and that the rock will be under water some hours from now? At what point is a shark full? He has eaten some whale and snacked on several humans. Is this a vindictive shark just killing for fun or does he have an insatiable appetite? No matter how much other food is available to him, he is still determined to eat this girl, who is making it as much of a challenge for him as she can?

Nancy visits this beach in an effort to connect, in some way, with her recently deceased mother, who loved going there years before. Nancy needs closure and this day could have provided that. Instead of coming to terms with her mother's death she ends up fighting to prevent her own. This film has plenty of tense moments and near misses but it has no depth to speak of. Of course I am going to write it. The Shallows is aptly titled.

The beach is gorgeous and Blake Lively looks good. She does a passable job but she is not required to do much, beyond swimming, as the story is so completely basic. It is as if a writer spotted a rock off shore one day and thought, "What would I do if I were stranded on that by a shark?" and all he came up with was, "Stay alive."