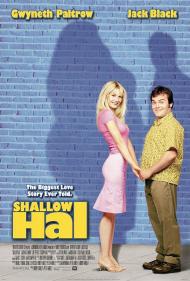 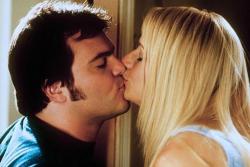 I broke the first rule of being a film critic when I sat down to watch Shallow Hal. The commercials for the movie played up the fat jokes and the cover for the DVD has the line "True love is worth the weight." With this kind of advertisement I expected a movie with little more than a bunch of fat jokes. Whereas this movie has a few jokes that may be offensive, it surprised me with its heart-warming sincerity.

Hal is a horn dog on the prowl. He only goes for hot, thin chicks. This attitude is attributed to a hilarious speech given to him by his father on his death bed. His father told him "...never settle for average." and "Don't be satisfied with routine poontang." Upon a chance meeting with a self help guru, Hal has a mind altering experience. He is hypnotized into seeing people for their inner beauty. Thus, he believes his new girlfriend is thin, when she is actually 300lbs.

Jack Black is an average looking guy with plenty of screen charm. Hal starts out as a near brainless party boy. By the end of the movie he has evolved into a completely likable character. He eventually learns that looks are not everything. Through Black's wonderful performance we see Hal slowly discover that a beautiful girlfriend does not guarantee, by any means, happiness.

Gwyneth Paltrow is - be honest - average looking. She is supposed to be this major hottie when Hal looks at her under hypnosis. Paltrow has a nice smile and is thin, but if she wasn't famous would anyone really think of her as gorgeous? Paltrow is often praised for her acting. I believe her to be the most overrated actress working today. She plays Rosemary like a cardboard box. She never gives this character any personality.

Although not as funny as There's Something About Mary, Shallow Hal has much more heart. Its message is old and very simplistic, yet any movie that has two people fall in love despite everyones objections is alright with me.