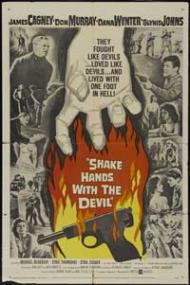 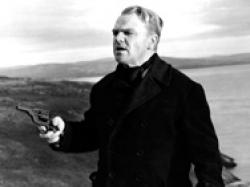 Of the many cold-blooded killers James Cagney portrayed in his long and illustrious career, I don’t think he ever played a more completely sinister character than Sean Lenihan in Shake Hands with the Devil. One thing that makes him so evil is the fact that he appears to be a hero at the start of the movie. He is a medical professor teaching surgery at a college in Ireland. He is also an officer in the IRA with more than a slight taste for murder.

I know very little about the historical setting of this movie. I know that it was based on a novel and deals with the Irish Republican Army in the year 1921. Just how historically accurate it is I have no idea. The story is a bit one-sided as it is told completely from the Irish point of view. Were the British “Black & Tans” as cruel as they are shown here? Again I have no idea. The main gist of the plot is Cagney’s professor trying to recruit a young American medical student. The young man’s father having been a comrade of Cagney’s that was killed by British soldiers 20 years before.

The story is fast-paced and has several good action scenes, the best one being a climactic shoot out at a shipping dock. The cast is impressive. It includes Michael Redgrave, Sybil Thorndike, Glynis Johns and a young Richard Harris in just his second big screen role. The acting is good but the accents are all over the place; especially Cagney’s. One minute his Irish brogue is as thick as Scarlet O’Hara’s fathers and the next he sounds like he’s straight out of the streets on the Lower East Side.

I am a huge fan of black & white cinematography but this is one of the few times I think a movie shot in B&W should have been filmed in color. First of all this was made in 1959 when color had become very commonplace. Secondly, and more importantly, it was filmed entirely on location in Ireland. They went through the trouble and expense of shooting overseas and then didn’t shoot the gorgeous Irish countryside and seashore in color! What a shame and a wasted opportunity. I believe this movie would be better remembered today if only they had filmed it in color.