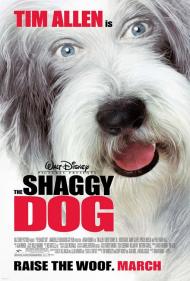 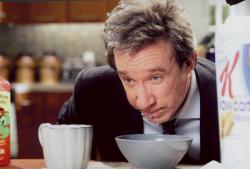 I've come to expect some pretty crap films from Tim Allen, but not from Robert Downey Jr.. He's certainly fallen a long way from his Oscar nomination when he starts whoring himself out for horrible fluff like this. As for Kristin Davis, after this and her previous appearance in Sharkboy and Lavagirl she's setting up quite the career for herself as the generic and thankless wife character in really bad family movies.

Allen has the role of Dave, an Assistant District Attorney prosecuting an animal rights activist who purportedly set fire to a lab where animal testing is taking place. The lab, which is run by sleazy scientist Dr. Kozak (Downey), has recently kidnapped a three-hundred year-old Tibetan sheep dog to run tests to discover the secret to his longevity. Dave's daughter, an animal rights activist in her own right, manages to help the sheep dog escape, but after she takes the dog home, it bites her dad who then becomes infected by the Tibetan dog's blood and who then turns into a dog and a human alternatively.

The message of the movie is family togetherness mixed up with a laughably simplified view of animal rights. Dave is a distant father who doesn't know his own kids because of all the time he spends at work. After he becomes a dog however, he learns everything he needs to know from the simple act of spending time with them. All well and good; a nice lesson certainly, but not one that is delivered in an entertaining manner.

Like so many movies this one treats animals as if they are humans, with a human intelligence. According to movies like this and the Dr. Doolittle series, the only difference between humans and animals is the way we communicate; except of course that all animals are benevolent and humans are evil. I would say that the secret to living for hundreds of years would be worth the discomfort of one dog having blood withdrawn from him.

The humor all revolves around Allen acting like a dog. He scratches himself, eats from a bowl, chases cats on all fours; in short, everything but hump someone's leg. Eventually he transforms completely into a dog and does doggy type things that are even less funny than the half-human/half-dog shtick. And after he becomes completely a dog we are treated to voice-over narration by Allen in which he sounds as bored as the audience is listening to it. I'll admit that some of the antics elicit a chuckle or two, but not nearly enough to justify the price of a movie ticket.

Granted, I'm not this movie's target audience, but I saw this movie in a theater packed with little kids. Their laughter was sporadic and it didn't take long for them to become restless. Believe me, several hundred restless kids hopped up on soda and sugary concession stand treats does little to increase a movie's enjoyment appeal.

A few years back Disney had a hit with its remake of Freaky Friday. Now it seems we are going to be forced to endure a series of live action remakes of their old films, each one a little less enjoyable than the one before it. 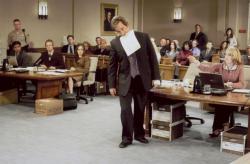 My 10 year old was eager to see The Shaggy Dog but only enjoyed a few scenes. He liked when Allen was chasing the cat and knocked the old lady into the tree and when the monkey used the cattle prod. So, other than those 30 seconds, he merely sat there and twice asked how long the movie had left.

I disliked the movie even more. I was so bored that I did my usual political analyses of a Disney movie. The Shaggy Dog is uncharacteristically Disney in that the parents are actually together in the movie. In true Disney form though, Christianity is no where to be seen but the beginning of the movie has meditating Tibetan Monks. Like Brother Bear showed American Indian mysticism, Disney is not afraid to show religion in their movies as long as it is not Christianity.

Also like Brother Bear, The Shaggy Dog is on a mission to humanize animals. At the end of the movie Allen has a speech about how animals having feelings. According to Disney, animals are just humans with more hair. 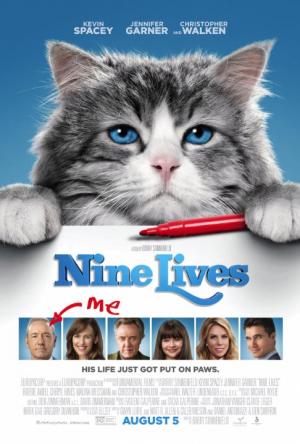