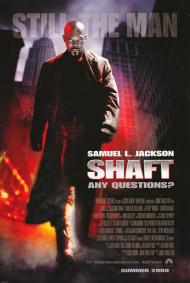 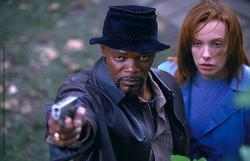 When you see sequels and remakes playing at your local theater you know the summer movie season must be in full swing. Shaft is a sleek, smart remake of the early seventies blaxploitation classic. With Samuel L Jackson playing the nephew of the original Shaft (Richard Roundtree has a small part reprising his most famous role) and John Singleton directing.

The story line is simple, the son of a very powerful man commits a racially motivated murder in front of a lone witness. After that it boils down to whether or not Shaft can keep her alive long enough to testify.

The real joy of this movie, aside from the action of which there is plenty, is watching the actors bring to life these vivid and descriptive characters. Richard Price, of Clockers fame, co-wrote the screenplay (with Singleton) and it shows in the dialogue. He writes cop speak, Italian American dialects and a mix of Latino and African American hip hop slang with equal aplomb.

In a cast that includes Vanessa L Williams, Christian Bale, Toni Colette, and Busta Rhymes, Jeffrey Wright is a stand out as the drug dealer Peoples. As for Samuel L. Jackson, he gives the larger than life John Shaft just the right combination of intelligent hero and ghetto badass. Look for Gordon Parks Sr. in a cameo (he's the older gentleman whom Shaft refers to as Mr. P).

Although the plot is a bit routine, the interpretation, i.e. a big budget action movie with a largely minority cast, is not. This one is worth seeing. 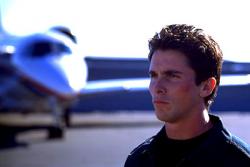 I disagree with Patrick on only one point. I thought Jeffrey Wright was more of a joke then anything else. The real villain in this film, is Christian Bale. And yet, except for the promising beginning, he goes underused. His brooding, character is far more menacing then the drug dealer Peoples. But that is a minor point, as is the rather humdrum plot.

What makes this movie standout from other action, shoot em ups, is Samuel L. Jackson's, ultra-confident, sleek as they come, portrayal of the title character; John Shaft. He glides through this movie like a cat, commanding your attention whenever he appears on screen.

John Singleton's direction emphasizes Jackson's presence. Shaft seems to tower over those around him, from the moment he first appears, pushing his way through the crowd.

I agree that the plot is routine, but Singleton's polished, stylish direction, on top of Jackson's performance, more then make up for it.

If this movie turns into a franchise, or at least generates a sequel, I hope they come up with something more original, but so long as Singleton continues to direct and Jackson stars, I for one, will definitely keep seeing them. 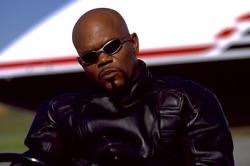 I agree with Scott, but I think it is an important point. The movie loses its way when Bale's character fades into the background and Peoples takes center stage. Peoples is just a drug pushing hood hired by Wade, yet Peoples is a better written character. We meet him and we see how his criminal life gives him prestige, at least in his neighborhood. Selling drugs and having a gang of hoods at his beck and call makes him an important man, at least in his neighborhood. His motives for being an asshole are understandable. His criminal ways feed his family and even more his ego. Not only does he end up with more screen time, but he gets better fleshed out than Wade. In one scene he is a violent gangster. In another scene he is tenderly holding his baby or telling Wade how important his family is to him.

Wade's character is completely unrealistic. He gets embarrassed so he attempts murder? Wade acts very sure of himself any where he goes, whether it is in court or a jail cell. He has all the confidence that money and power can buy, yet he commits an act based on being insecure. Anyone who has ever watched Oprah can tell you that racism is based on individuals insecurities. Wade has none. He is a rich, good-looking guy who can get whatever he wants. Why the hell would he feel threatened by a black guy dating a white woman in a public place? Wade is written to be a racist just for the sake of being one? The movie hints at some family issues, but it never explores them enough to justify his rage and self esteem problems. Wade is just a manufactured stereotype who has no real motive for the heinous act he commits.

I guess Singleton thought Wade's skin color and wealth alone were enough to announce him as a violent racist. If Singleton could give Peoples, who really is just a glorified second rate character, a rounded personality then he could have done the same for Wade. It is as if he didn't want the audience to care at all for Wade so he never allowed him to become human. We are not supposed to like him, but at least give us some reasons for his actions. Would it have been so hard to have the white girl be Wade's former girlfriend who left him for the black guy? At least that would have made better sense as a motive than just his skin color and economic standing.