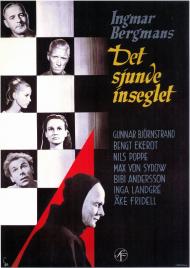 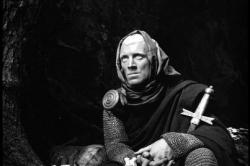 A world weary knight returns from the crusades with his squire to a land ravaged by the plague. He pauses on a rocky beach to rest. Here he meets Death and challenges him to a game of chess. If the Knight wins then Death must let him go free. So begins Ingmar Bergman's classic The Seventh Seal. It's a fantastic setup featuring iconic imagery that has been paid homage to and parodied in countless films since.

The story is a dark and simple one. The knight, Antonius Block (played effectively by a tall, gaunt and young Max Von Sydow) journeys the rest of the way home, continuing the game of chess when he stops to rest. Along the way, he meets a troupe of actors that includes a young couple name Mia and Jof (Swedish for Mary and Joseph) and their baby. He picks up a few other strays along the way as well. He also encounters a witch set to be burnt at the stake and a group of religious flagellants. Overall it's a dark look at the human race when they're living under the shadow of constant death.

Bergman, the son of a minister, was concerned with questions of God and his absence from men's lives and that is a central theme in this movie. Antonius is a man seeking answers. He longs to know that God exists. He goes to confession and tells the Priest (who is actually Death in disguise) that, "I want to confess as best I can, but my heart is void. The void is a mirror. I see my face and feel loathing and horror. My indifference to men has shut me out. I live now in a world of ghosts, a prisoner in my dreams."  And later he says, summing up the film's central theme, "Faith is a torment. It is like loving someone who is out there in the darkness but never appears, no matter how loudly you call." Even the existence of the personification of Death offers Antonius no solace as Death informs him that he knows nothing of God.

Jons, the Knight's squire, offers the counterpoint to Antonius's quest for answers. Jons is down to earth and provides some of the movie's comic relief. He has a dark opinion of women and love and believes there is only darkness after death. "Love is the blackest of all plagues... if one could die of it, there would be some pleasure in love, but you don't die of it," is one of his quotes, adding "Love is nothing but lust and cheating and lies."

The cinematography and imagery is wonderfully done. The pale skinned, black robed Death isn't a Bergman invention and he admitted that he took much of the imagery from paintings and churches, but no one has done it better and every film that uses the character of Death since then, owes a debt to this movie.

While the tone and plot is very dark, there is some hope offered by the characters of Jof and Mia. They are innocent and full of love for each other and their child. The only happy moment Antonius has in the whole film comes when he shares a quiet moment with them at dusk, eating strawberries and drinking milk. He proclaims, "I shall carry this memory carefully in my hands as if it were a bowl brimful of fresh milk. It will be a sign to me, and a great sufficiency."

Even if you've never seen this movie, you may recognize parts of it. Movies such as Monty Python and the Holy Grail, Woody Allen's Love and Death, Ladyhawke and even Bill & Ted's Bogus Journey and many others, have stolen images from it and either paid tribute or parodied it in dozens of different ways.

When this movie was released it may have shocked audiences by questioning the existence of God. Now, over 50 years later, it's more shocking that a movie is even concerned with the question at all. In this age of irony there seems to be very little room for earnest questions of god or religion. Hollywood today is certainly on the side of Jons rather than Antonius. 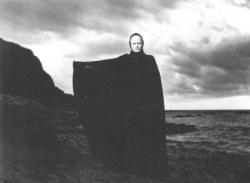 I agree Scott. For the last twenty years or so it has fallen out of fashion to openly exhibit spiritual faith or display heartfelt emotion, whether in society or on film. Today everyone hides behind a shield of irony, afraid to appear as if they aren’t in on the cosmic joke that is life. Frankly I’m bored with it already. I look forward to the (ironic) day when irony itself is viewed as corny and old-fashioned. And whereas the world weary cynicism shown by Jons was born of strife and a life spent amidst horrors, today’s spoiled masses become jaded mostly out of boredom.

700 years ago things were quite different. The world so vividly depicted by Bergman in The Seventh Seal deals with a human society struggling to survive. As Scott wrote, this movie is filled with iconic scenes and images. Its influence on movies and television over the last half century is indeed enormous. And with its easy to follow storyline, limited dialogue and a running time of just over an hour and a half, it is one of the enigmatic director’s most accessible films.

Without getting long winded or preachy Bergman examines the most profound questions about life, death and the human condition. The juxtaposition of the Knight’s search for religious answers with his squire’s atheism is simply yet brilliantly handled. The symbolism of the chess game is also very effective. Isn’t there a part of each of us that secretly hopes - against all logic - that we can somehow outwit death when our time comes?

The small cast is excellent. Besides the perfectly cast Max von Sydow, Gunnar Bjornstrand as the squire, Nils Poppe as the fanciful actor and Maud Hansson as the witch are all very good. The latter character plays an important role. Antonius Block – in his desperation to discover the truth of God’s existence – turns at last to Satan himself for answers. He has the following exchange with the witch before she dies.
Antonius Block: “Have you met the devil? I want to meet him too.”
Witch: “Why do you want to do that?”
Antonius Block: “I want to ask him about God. He must know. He, if anyone.”

Although the overall tone is dark and gloomy, Bergman ends it on an uplifting note. After witnessing a vision in silhouette of Death leading a single file group of people by the hand up a hill (another of the movie’s iconic images), the final shot is of Jof, Mia and their baby boy heading off contentedly together down the road. The term Masterpiece is often misplaced but it certainly applies to Ingmar Bergman’s The Seventh Seal. 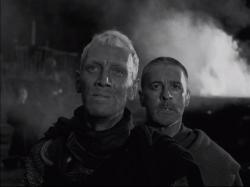 Max von Sydow and Gunnar Bjornstrand in The Seventh Seal

The Seventh Seal creates much food for thought.  It opens with a quote from the book of Revelation,  8:  1: And when he had opened the seventh seal, there was silence in heaven about the space of half an hour. 2: And I saw the seven angels which stood before God; and to them were given seven trumpets.  Revelations then describes how the angels in turn blow their trumpets, and with each trumpet blast another huge part of the earth is destroyed.

Taking place in a country overrun by plague, The Seventh Seal carries doom like a knight carries his sword.  It is ever present as a reminder of everyone's limited time of this earth.  As Scott and Patrick (who gave away the ending) mentioned, there is a bright spot.  Someone's life comes to an end while another life is just beginning.

The entire film is full of religious interpretations.  Antonius and Jon went on crusades in the name of God.  They encounter different people who all have their own perceptions of God.  The young minstrel father sees a noble looking woman and a child one morning and believes it to be a vision of Madonna and child.  Antonius and Jons come across a woman sentenced to death because the villagers believe she had sex with the devil.  There are flagellants who whip themselves, believing it brings them closer to God. They meet a fallen priest who is now a thief.

Antonius believes in God, but wants solid proof of his existence.  He is also searching for the meaning of life.   Is it found in religion, mythological beliefs, love, sex, compassion, death?  This film explores the timeless question, but I am not convinced Ingmar Bergman answers it.   He merely presents the obvious that death comes to all, no matter what our beliefs may be.

Clearly Bergman was going for a thought provoking film to be analyzed and discussed.  It does that very well.  It has some humorous lines, mostly provided by Jons.  "I have a wife.  I hope she is dead now."  The funniest moment is when the unfaithful wife tries to sweet talk her husband and Jons announces everything she will do before she does it.

Packed with symbolism and conversation starting situations, The Seventh Seal has much to offer.  It could easily be shown in a class for dissecting.  It is not however, intended for a light entertaining watch.   I started this four different times before I was able to finally get through it.  This film succeeds on so many levels but it will be a long time coming, if ever, that I watch it again.