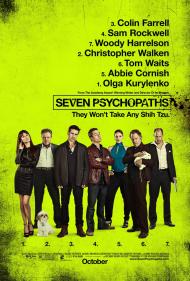 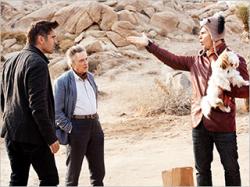 Writer/director Martin McDonagh's previous film, In Bruges, which also starred Colin Farrell, was one of my favorite films of 2008. I was looking forward to his follow-up, which looked to be very much in the same vein. Seven Psychopaths certainly starts strong, but it doesn't sustain itself. It tries to be too clever by half with plenty of meta-references. The plot, what there is of it, evaporates as the movie progresses and ends, not with a bang, but a whimper.

The marketing for the movie plays up the dark comedy and that is the movie's greatest strength. There's sharp and witty dialogue aplenty. The humor often combines blood and violence, or is quickly followed by it. As with In Bruges, you need to have a dark sense of humor to enjoy it. It's the kind of dark, quirky humor that actors like Sam Rockwell, Christopher Walken and Woody Harrellson were born to play and they make the most of it. Farrell showed that he was adept at it as well, but he's playing the straight man this time around, merely reacting to the oddness and psychopaths around him.

There's also the implication of a lie in the movie posters by the marketing team. The poster lists 7 actors with numbers next to them, implying that these are the titular psychopaths. Olga Kurylenko and Abbie Cornish, both get featured on the poster in this way, when they both, particularly Olga, have very small parts. They're obviously featured just to imply there are some female characters. The inclusion and treatment of females characters in movies like this even gets a joke made about it in one of the many self-aware references.

There isn't much of a plot. Farrell plays Marty, a screenwriter with a title for his next script, but not much else. His title is Seven Psychopaths, but he's having trouble coming up with that number. He has an out of work actor friend, Billy (Rockwell), who sidelines as a dog napper with Hans (Walken). They kidnap dogs and then return them when a reward is posted. Billy is unstable (although just how unstable isn't revealed right away) and he's kidnapped the dog of a psychopathic mobster played by Woody Harrellson.

Really though, the script is just a series of scenes, loosely tied together. Some of them are very well written and some of them are quite funny. All of them are well acted. They just never feel like they're leading anywhere. The ending is very anticlimactic and it takes far too long to get there.

McDonagh knows how to write dialogue and some of it is clever. Sure, there's a definite Tarantino vibe to the whole thing, but McDonagh has his own unique knack for writing funny lines. If only he'd put as much effort into the story as well.

My review sounds negative, when in truth I did enjoy this movie despite its faults. My expectations were high going in, apparently too high. If I can lower yours, you may enjoy it more than I did. I certainly can't recommend the expense of seeing it in theaters. You'll be better off waiting until you can watch it more reasonably in your own home. 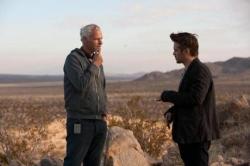 Scott compared Seven Psychopaths to a Tarantino film and this does start with a strong Tarantino-esque scene. Martin McDonagh has some similar writing styles to Tarantino. Both are big on dialogue and graphic violence. Neither creates characters that earn much sympathy from the audience. Django being a rare exception. I do however, enjoy McDonagh's sense of humor much more than Tarantino's.

I found the self references that Scott did not like, to be funny. Colin Farrell's Irish screenplay writer Martin, is an extension of Irish writer/director Martin McDonagh. At one point, Walken tells Farrell, in reference to his script, "Your women characters are awful." McDonagh's films are testosterone heavy. In another scene, Rockwell says of Farrell, "No one thinks you're a pussy." In a December, 2012 interview with Catherine Shoard, McDonagh called writers, "Pussies." He did state however, that he has never lived the Hollywood writer life style that Farrell does in the film.

McDonagh takes the audience on a journey with unexpected destinations. The entire film is tongue in cheek. We even have a scene where they discuss how it should all play out. I enjoy the dialogue that breaks from tradition. At one point, a man points a gun at Walken and says, "Put your hands up." Walken looks back at him and states simply, "No." The ending involves the real 1963 suicide of a Buddhist monk and a bit later a conversation with the line, "You think I'm not serious just because I carry a rabbit?".

I love McDonagh's dark sense of humor. "You can't let the animals die in a movie... only the women." "I didn't mean to break his nose. His nose was just in the middle of where I was punching."  "I know you said dream sequences are for fags...Not just fags. Oh, by the way I don't think they like being called fags any more. I think now-a-days they prefer "homos."" I look forward to his next film, and in the mean time, I may read one of his books. 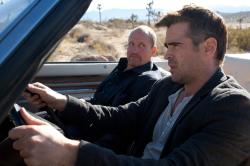 Seven Psychopaths is a colorful, stylish, blood-soaked comedy with a dark quirky sense of humor. I enjoyed it but I also agree with Scott that it isn't quite as clever or funny as it thinks it is. It's filled with politically incorrect dialogue but too often the joke is simply the fact that the characters are saying something audacious or offensive without the actual line being truly funny.

For example, at one point Billy says this, “Hey new idea, how 'bout we change the title from The Seven Psychopaths to The Seven Lesbians Who Are All Disabled And Have Overcome All Their Spazzy Shit And Are Really Nice to Everybody And Two of Them Are Black. How 'bout that?” Ten years ago I might have found this funny but I've heard too many variations on it over the years. The line Eric quoted about “fags wanting to be called homos”, is likewise about as fresh as yesterday's baguette.

Some of the un-PC humor does work though. Especially the line about not letting animals die in movies... only the women. It's a funny line that becomes hilariously ironic when you learn that it sprang from reality. In the original script Charlie's dog was supposed to get shot, until the film board informed them that animal cruelty was a no-no. You can only laugh at the utter ridiculousness of the fact that in a movie filled with human carnage, they frowned upon a dog getting shot.

The cast all do good work. It's nice to see Gabourey Sidibe continuing to get work in Hollywood post Precious. Woody Harrelson doesn't overdo it as a gay gangster. Sam Rockwell seems to be having the most fun as Billy, while Colin Farrell, as Scott said, is content to play the straight man. The scene I laughed the hardest at was another one Eric mentioned. Christopher Walken refusing to put his arms up at gunpoint made me crack-up, especially the deadpan way he says, “Because I don't want to.”

With In Bruges and Seven Psychopaths Martin McDonagh has proven himself to be a talented filmmaker with an eye for color and a felicity for language. I'm curious to see what he does next.