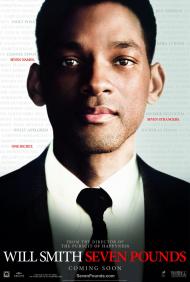 Some movies just make you feel depressed. This is one of those movies.

Seven Pounds is one of those movies where the plot is doled out incrementally. It feeds you the story like a mystery. Who is Ben Thomas? Why is he helping people? What's the deal with all those flashbacks? Sadly, the reason for this mystery is clear. The story of this movie is very weak and apart from the star power in it, could easily have been a Lifetime Movie of the Week. The mystery is there to disguise this. If only it did a better job.

The always likable Will Smith plays Ben Thomas. An IRS agent with a past. With the help of a lawyer friend of his, he's tracked down several deserving people all of whom have medical conditions. Keeping his motivation in shadows he befriends and intimates that he can help each of them in a life-changing way. Could all of this be connected to those odd flashbacks that Ben keeps having about a car accident? And will the fact that the Jellyfish he keeps in a tank is, as Ben points out, one of the most poisonous creatures on earth, come back into it?

Smith has long bopped back-and-forth between blockbusters and dramas with some success. This is one of his rare missteps. I've always thought that his dramatic skills were overrated, and his performance here is one of the weakest of his careers. It's not the big moments where he fails. He can cry and emote, but in the quiet scenes he seems awkward. But his whole career is pretty much based on the fact that he has an 18 charisma and because of that he still manages to carry off this part somewhat.

At almost 2 hours, this movie is also about 30 minutes too long. The mystery of the movie just isn't strong enough to sustain the story. By the 90 minute mark, if you've been paying attention at all, you'll have figured out exactly what is going on and have a pretty good guess what is going to happen and will just want the big reveal to be over with already.

Some movies are sad and make you feel sad, but in a good way. You cry or care because you can empathize with the characters. Some sad movies just make you feel depressed. Seven Pounds is one of the latter. 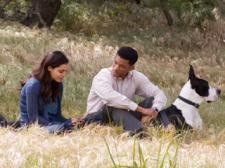 Unintentional humor in a drama is never a good thing.

I agree Scott. This movie magnifies all of the limitations of Will Smith’s acting ability. He falls completely flat in nearly every scene. Although to be fair Rosario Dawson is only slightly better. The dialogue, the script in general and the directing are all pretty contrived as well. In fact this is just one big mess. The plot might have worked with a different script, director and star. I could almost see it working under Ron Howard’s direction and starring Russell Crowe for example.

The heavy handed manner in which the melodrama unfolds is almost unintentionally funny at times. And Smith’s character is absurd. And yes it is obvious where the story is heading long before we get there. Please, do yourself a favor and skip this one. To use the parlance of Variety, Fresh Prince hatches seven pound turkey. 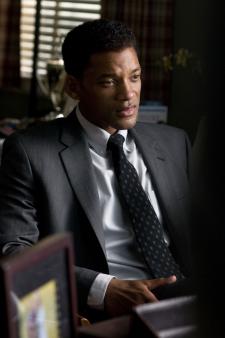 What is the point?

I cannot recall where I heard or read it, but I agree that you know an actor has succeeded when you only see the character on the screen, and not the star. In Seven Pounds, I never saw Ben, I only saw Smith trying to look serious. He tries so hard to look serious that he ends up sabotaging the movie.

Ben is extremely depressed. He has had some horrible experiences, and decides to do some nice things to hopefully make up for them. This is an attempt to make good out of bad. However, Ben never seems happy. Even when he smiles it seems put on for the sake of the person he is with. Thus we are stuck watching a depressed person walk around for two hours. I can watch that at work. Why in the hell would I want to pay to see it?

The only thing going for Ben is that he is attempting to do some good things for other people, but why? Is he doing it to make himself happy? If so, at the end he should have had a smile on his face knowing he was about to create some miracles, but he does not. He remains depressed to the very end. If it was to make the other people happy, then the movie is told from the wrong point of view. Ezra does not get enough screen time to allow the audience to emotionally invest in him, so his gift from Ben has little impact on us.

Ben should have started out depressed, and then learn to love life again as he helps people. Instead, Ben helps people, and gets more depressed. How did this story ever sound good on paper?

Most not-so-great movies still contain something to enjoy. Doubt had little plot, but some amazing acting. Push had plot holes, but an interesting premise. Seven Pounds has absolutely nothing to offer, except the feeling of regret in not watching something else.