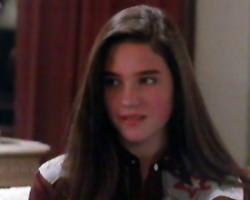 When I was a teenager "Seven Minutes in Heaven" was a game played at parties like Spin the Bottle where a boy and a girl, chosen at random, would go into a closet and makeout for seven minutes. Because of that I assumed this movie was going to be some kind of 1980s teen sex comedy. Surprisingly, it's not, but is instead a rather sweet coming of age story for three fifteen year old best friends.

Connelly, in just her second starring role, plays Natalie Becker, the mature, responsible one, who's politically active and civic minded. Her two best friends are Jeff and Polly. Jeff has issues with his step-father and when the movie opens, he runs away from home and stays with Natalie whose single-father is away for a week. Although this causes their whole high-school to talk about them, Jeff and Natalie are just friends, because Jeff has a crush on Polly. Polly, while boy crazy for everybody else, just sees Jeff as a friend, and is instead always lusting after older boys and sometimes men with typically unsuccessful results. Natalie ends up falling for a popular boy from whom she learns that book smarts don't always help with affairs of the heart. Polly meets and makes out with a baseball player in his twenties and Jeff confronts his family situation and his feelings for Polly.

If all that sounds like pure teen soap opera that's because basically it is. One thing that sets it apart from most teen soap operas though is that the characters are played by real teenagers and they behave like real teenagers; their maturity level is low and the situations they deal with are age-appropriate situations. It reminded me of one of those old after school specials they used to show when I was young. Although to be honest, even those old specials contained more melodrama than this movie does. It almost seems quaint in its innocence.

Of the three leads, only Connelly would go on to stardom. Maddie Corman has continued to work and is one of those recognizable character actresses whom you recognize when you see, even if you don't know her name. Apart from hints of her emerging beauty, Connelly does little that indicates future stardom. She's good in the part, but it certainly isn't a starmaking performance by any means.

By the end of the movie all three of the characters have learned something, but refreshingly they aren't suddenly instantly mature. As the three of them rollerskate away into the sunset you can see that they haven't so much come of age all at once, but maybe they've taken the first step toward doing so. 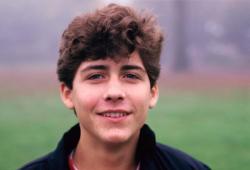 Quaint is a good word for this movie. Was the world really this innocent in 1985? I suddenly feel old, as I graduated from high school that year. The cars and fashions in this suburban Ohio setting seem hopelessly antiquated. This sweetly innocent story of three friend’s coming-of-age is mildly entertaining but ultimately not very memorable. I agree with Scott that it is refreshing seeing teen characters being played by actual teenagers. The cast is OK if slightly amateurish. Connelly seems shy and subdued most of the time.

The relationship between Natalie and Jeff was the more interesting to me. She was raised by her dad after her mother’s early death and Jeff was raised by his mother. His biological father is a dead beat off following his pipe dreams in California and Jeff has issues with his stepfather. Jeff longs for his real father as he imagines him to be, while Natalie missed out on having a mother. This plus the fact that they have known each other their entire lives has created a strong bond between them. At one point Jeff gives Natalie a photograph of them both as infants taken on the same day. They really are more like brother and sister than friends.

Polly is there for comic relief. She is rather plain looking. She talks and acts more sexually aggressive than Natalie. Her scenes with the older baseball player are about as shocking as the movie gets as he is an adult and Polly is only 15. They make out in a car and he gives her a baseball cap to remember him by.

The plot is rather slight. The story culminates with Natalie going on a school trip to the nation’s capitol while Polly sneaks off to New York in search of her ball player. Seven Minutes in Heaven is a minor little movie that is remembered (when it is remembered that is) for starring Jennifer Connelly at the beginning of her illustrious career.