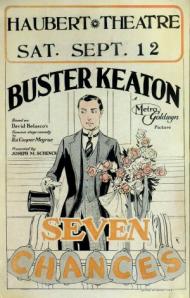 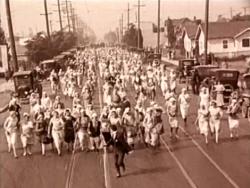 Buster Keaton and a whole lot of gold diggers.

Although it is based on a play, Buster Keaton directs Seven Chances well out of the confines of a stage.  He puts so much action and chases into it, that I cannot even imagine this as a play.  One of the funniest moments happens in a car while trying to propose to a girl in another moving vehicle.

Seven Chances opens with shy financial broker Jimmie Shannon trying to get up the nerve to tell his girlfriend Mary that he loves her.  Meanwhile he and his business partner Billy are nearly bankrupt.  One day a lawyer shows up at their office with Jimmie's grandfather's will.  Jimmie will inherit seven million dollars if Jimmie can get married before 7 pm that day, his 27th birthday.  The movie never says why there is a deadline.

Jimmie immediately heads to Mary's house to ask for her hand, but she does not want to get married in a hurry, and refuses his proposal.  Depressed and desperate for the money to save the firm, Jimmie starts asking every girl he meets to marry him.  Everyone turns him down.

As was common in silent comedies, the film has some bigoted jokes.  In one scene, he comes up behind a woman on the street to propose.  Upon seeing that she is black, he makes an immediate u-turn.   He also sits next to a woman on a bench, but before he can propose notices that she is reading a newspaper typed in Hebrew.  He runs off.   Then there is the black farm hand played by a white man in black face.

With Jimmie finding no takers, Billy decides to put an ad in the newspaper announcing Jimmie's dilemma and potential financial gain.  This causes hundreds of unattractive women to start chasing after Jimmie.  This leads to Keaton's largest chase scene this side of Cops (1922).  They pursue him through town and country.  The chase scene is long and contains the film's greatest stunts.  One of the best moments involves Keaton running down a hill in the middle of a rock slide.

Seven Chances was remade as The Bachelor (1999), starring  Chris O'Donnell.  It features such famous women as Brooke Shields and Mariah Carey in cameos.  Seven Chances did the same with Jean Arthur and Constance Talmadge, although Arthur was hardly at her height of fame.

Seven Chances demonstrates Keaton's talents well.  As director, star and stuntman he is amazing to watch, and this is one of his finest films. 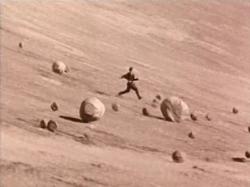 Eric mentioned the racially insensitive jokes. Now that I've seen nearly all of Keaton's silent movies it seems to me he relied on this type of bigotry for laughs more than either Chaplin or Lloyd did. Chaplin and Lloyd were certainly guilty of the occasional racially insensitive characterization but Keaton -in this movie at least- makes the stereotype the joke itself.

The Jewish woman and black woman don't do anything remotely funny. The laugh is generated just from the fact that they ARE Jewish and black. And he does it repeatedly throughout the fifty-six minutes of Seven Chances.

The white man in blackface is cringe inducing, and it's not like he's only in one scene.  He keeps popping up throughout the movie. Unlike Chaplin and Lloyd, Keaton came from the American vaudeville circuit with its tradition of minstrel shows. Perhaps this affected his sense of humor? It's the closest thing to a consistent flaw in his otherwise mostly brilliant film canon.

Seven Chances features several funny lines. There's a scene at a restaurant where Keaton asks seven different women to marry him. At one point he comes up to his business partner and asks, “Who bats next?” It's not just a funny line it also shows how movies were already reflecting and influencing modern vernacular even before they learned to talk. Later a title card informs us that, “By the time Jimmy had reached the church, he had proposed to everything in skirts, including a Scotchman.” A same-sex marriage joke in 1925!

Jean Arthur was a young up and comer that audiences wouldn't have recognized at the time but Constance Talmadge's appearance in a cameo may have produced wry laughter, since Keaton was married to her sister Natalie at the time.

The final fifteen minutes are pure comedy gold as Keaton runs and runs and runs and leaps and swims and rolls and runs some more. Not surprisingly it includes a brief stop at a rail yard where Keaton momentarily fools his bridal-gowned pursuers into thinking he's been run over by a speeding locomotive.

The rocks chasing him down the hill sequence (see photo) is quite simply one of the greatest extended sight gags, not to mention one of the most physically demanding stunts, ever filmed. And then, just for good measure, there is one final close call with a train as Keaton races the clock to marry Mary.

The reliance on consistently overt racism and antisemitism for laughs mars a motion picture that is otherwise quite clever and funny with a brilliant climactic chase. 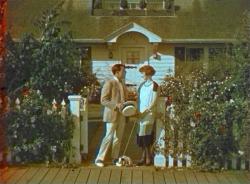 An early Technicolor glimpse of Buster Keaton and Ruth Dwyer in Seven Chances.

I agree that there are a few moments of racist and anti-Semitic humor, but I'm willing to forgive them. The farmhand in black face is the most offensive, while Keaton's reaction to marrying a black woman or a Jewish woman, while racist, are merely reflections of the time, as shocking as they may seem to today's audience. One reaction that neither of my brothers mentioned is when Keaton goes into the backstage door after seeing the poster for a beautiful woman on a sign outside the theater. He scurries out moments later with a disconcerted expression. A few boxes are moved by a stagehand and we see the name of the "woman" in the poster is Julian Eltinge, a very famous female impersonator of the day.

The final chase scene with the tumbling rocks is definitely the most memorable moment, but it almost wasn't in the film. Originally the chase ended on a simple fade-out, but a fortuitous accident saved the scene as Keaton related to his biographer, Rudi Blesh. "Do you know, three little rocks saved me! Our fade-out was on me, running down the side of a hill, all those weirdos after me. A real dud, and we knew it. However, we previewed it. Medium laughs, a few giggles through all that chase. Then, suddenly, just before the fade, a real belly laugh. . . so we ran the ending slow at the studio. There it was. I had accidentally dislodged a rock. It started to roll after me. On its way, it knocked a couple more loose and there were three little rocks chasing me. . . So we went back and milked that gag. . . built a hundred and fifty rocks of papier-mache on chicken wire, from baseball size up to a boulder eight feet in diameter. We found a longer ridge, and. . . triggered them in sequence. We assembled the gals again, a hundred feet back and used a starter's gun. On your marks, get set, and bang! I only had to kick the first little one and then keep going. The key words are 'keep going' because it built up to an avalanche right on my heels. So naturally, I stumble - if it's not in the script, I stumble anyway - and the big one knocked me twenty feet in the air. When I staggered up and staggered on, it was for real."

Unlike many of Keaton's films, this one has been preserved remarkably well. The print is crystal clear and provides a great opportunity to watch the subtlety of Keaton's work. It's true that he rarely cracks a smile, but he still manages to convey quite a range of emotion using his eyes and body language. Even more remarkable is the opening scene shot in Technicolor, which gives audiences a chance to see a youngish Keaton without the slather of makeup so common in black and white silent films. The clear print not only improves the gags, but it also gives audiences a chance to really look into the past as the costumes, locations and props are perfectly visible.

Reportedly Keaton never wanted to make this film. He'd seen the play it was based on in 1916 and thought it a "creaky, overly contrived farce." He only made the film because he owed his brother in-law, producer Joseph Schenck, money and Schenck had purchased the film rights to the play. Keaton's instincts may have been right that basically this was a one joke film, but in his skillful hands and thanks to a little serendipity, it turned out to be a very fast paced, entertaining little film that's worth a watch just for the final chase scene alone.