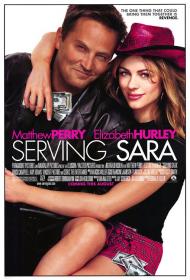 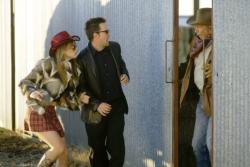 The two stars that I give this movie are for the stars of the movie;  Matthew Perry and Elizabeth Hurley.  To put it quite simply, if you like these stars, you'll like this movie, otherwise you probably will be disappointed.  It really is that clear cut.

The plot is pretty close to being a rip-off of the DeNiro/Grodin comedy, Midnight Run.  Only instead of a private detective sent to track down a bail jumper, Matthew Perry plays a process server sent to serve divorce papers on Elizabeth Hurley.  She in turn convinces him to help her serve divorce papers on her husband instead.  It seems that which ever one them manages to serve the other first will get the best deal in the divorce.  Some of the other plot points are directly inherited from Midnight Run as well.  There's the other process server trying to do the same job.  There's the dispatcher who is only shown in the office conversing with everyone by telephone, although this time he is played by Cedric the Entertainer.

Matthew Perry might be able to play a huge range of characters.  He might be able to give an Academy Award winning performance.  But no one will ever know, because he only ever takes parts that are, in reality, just different variations of his Chandler Bing character from the hit series Friends.  About the only difference in this movie from Chandler is that he dresses better and gets to swear every now and then.  Apart from that, if you know Chandler Bing, you know this character.

Elizabeth Hurley looks good, as always.  Not that she is just a pretty face, just that other than that, she doesn't have a whole lot to do.  I suppose we should be grateful then that she manages to look good, so well.  All those years of modeling come in handy.

The humor is sophomoric at best.  Examples of jokes are Matthew Perry being hit in the face.  Matthew Perry putting his hand up a cow's ass (don't ask), and a running joke of Matthew Perry spitting wine after tasting it (his dream is to own a vineyard).

Likable enough actors in a weak movie, Serving Sara is a lightweight, diet comedy.  Filled with artificial sweetener, and ultimately not satisfying enough. 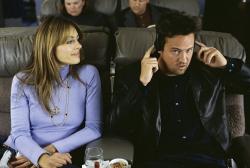 I agree completely with Scott that Serving Sara is a run of the mill romantic comedy. Although it will seem sacrilegious to mention these two films in the same paragraph, a bickering couple that fall in love on a road trip goes all the way back to Clark Gable and Claudette Colbert in It Happened One Night. In that 1934 classic, all Colbert had to do to manipulate a man was flash some leg, while Hurley has to expose her breasts. Talk about inflation. (pun intended) To date, no one has improved on the original formula. Fellow Friends cast member, Jennifer Aniston tried as well, and failed miserably when she starred with Gerard Butler in The Bounty Hunter (2010).

Speaking of Friends, Scott wrote that Matthew Perry is merely playing a variation on his Chandler Bing character. That may not have been Perry's original intention but it ended up that way. Joe Tyler is a much tougher person than Chandler Bing. He gets into fights and bleeds without acting hysterical. For lack of a better word, Joe Tyler is more macho than Chandler Bing. He wears tough guy clothes and often has a little five o'clock shadow. I bet that Matthew Perry took this part with the idea that it was a different role from his television persona.

With that said, many of Joe Tyler's lines could have easily been written for Chandler Bing. To an over weight kid on a bus, Tyler snaps, "Hey, mind your own business pork chops." After witnessing a car accident, he says, "Hey, I'm not sure if you guys have met, guy who got run over, guy who ran over." If Perry really wanted to lose the Chandler stigma, he should have eliminated the over use of the word, "Hey." Perry was noted for adlibbing on Friends and it makes me wonder if some of his lines here are of his creation as well.

You can see that Perry wanted to play a different role and made some effort to do it. In the long run though, he was not able to maintain the character. Serving Sara was filmed during his painkiller addiction period. He was actually in rehab during some of the production. I have no idea if that played into his performance, but this movie pretty much ended his film career. He would only have one more major theatrical film release, The Whole Ten Yards (2004) the sequel to his biggest hit film The Whole Nine Yards (2000), before retreating to the format that best suits his talents, television.