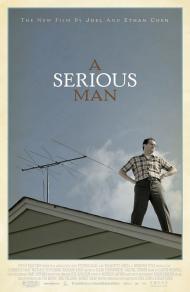 Michael Stuhlbarg as Larry Gopnik in A Serious Man.

My favorite part of any Coen brother's film is their sense of humor. Although their movie's are often pretentious and cause film students to get worked up into a lather, their humor is the saving grace for me. It's a dark, sly, sometimes dry, quirky brand of humor written with their unique voice. It's certainly the comedy that was my favorite part of this movie.

Featuring a cast of mostly unknowns, A Serious Man is reminiscent of the story of Job only without all that religious faith and God stuff. Following an opening prologue (whose meaning will be interpreted and debated by Coen scholars for years to come I am sure) that tells the story of Jewish couple and a guest in their house who may or may not be an evil spirit, the story moves on to follow Larry Gopnik in 1967.

Larry is a professor who is up for tenure. He lives in the suburbs with his wife and two children. Along with reminding me of Job, the story is also Murphy's Law in action because almost as soon as Larry appears on screen anything that can go wrong for him does go wrong for him. One of his students tries to blackmail him. His son is smoking pot instead of studying for his bar mitzvah, his daughter does nothing but complain and steal money from him. In fact, no one in his family treats him with respect. His wife is having an affair and wants a divorce; not just a divorce, but she wants him to be friends with her lover as well. Someone is writing letters to his boss telling him not to give Larry tenure. His brother (Richard Kind in a small but funny role) is sleeping on his couch and his neighbor keeps moving the property line. It's enough to test the patience of a saint, let alone a suburban physics professor.

As in the Coen's No Country for Old Men, this film is a bit open-ended; or perhaps I should say, it's an abrupt ending and one that doesn't provide a lot of answers. This is the kind of thing that film student's love because they can impose their own interpretation on it. There's a line in the movie that sums up my feelings for the ending, "Why does he make us feel the questions if he's not gonna give us any answers?" Actually I don't really mind that the meaning of it all isn't spelled out, but I dislike that we don't learn more specifically the fate of the characters.

What bugs me about the ending is that right up until it I was very much enjoying the film. There's a quote attributed to W.C. Fields that goes, "Comedy is tragedy happening to someone else", and this movie certainly proves that. Larry's woes are rife with humor for the audience. And the characters, as you'd expect form the Coens, are odd, quirky, funny and entertaining. This is a four star movie with a two star ending.

There's one thing about a Coens brother's film; I'm rarely bored during one. They are one of the few directors working today whom you always know when you're watching one of their films. Their unique voice is original and often very funny. If only they would give more concrete endings!

Oh no! The television is not getting good reception?

The ending did not bother me as the entire movie is just a series of events. His wife, his son, his daughter, his job, and his brother all create problems for him to react to. The ending shows that life just moves onto the next problem.

I have not felt this bad for a married father since I watched The Bicycle Thief. That guy had one problem, and once that was solved, his life would improve immensely. Larry has many issues and has no clue how to solve any of them.

Scott wrote that this movie is, "...without all that religious faith and God stuff." But that is not actually true. Larry is a very religious man. He seeks counsel from Rabbi's several times. He refers to God often. His Judaism is as much a part of him as anything else. One of his happiest moments is his son's bar mitzvah.

I am not a big fan of the Coen brothers. They seem to make movies for themselves, and not a large audience. This movie is case in point. If it were not nominated for an Academy Award nomination, I would have never even heard of it. Did it even get a wide release?

Sure they have a sense of humor, and there are a few jokes here. I have kids the age of Larry's kids. I smiled understandably, when the son called his dad to fix the antenna. Teenagers are the second most selfish creature in the world. I would hardly call this a comedy though. I also do not consider it Oscar worthy. My favorite part was the old world fable. 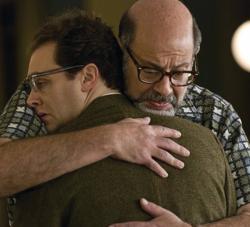 Larry Gopnick gets a big bear hug from Sy Ableman, his wife's boyfriend in A Serious Man.

I agree Scott, the Coen brothers are two of the best filmmakers working today. They do indeed bring a unique voice and style to their films as well as an unmistakably quirky sense of humor. A Serious Man represents some of their best work yet. Nostalgic suburban family movies set in the 1960s have nearly become a genre unto themselves. What makes this one unique is the fact that it deals with a Jewish family. Since Jews make up only about 2 percent of the US population, it's safe to say many Americans are unfamiliar with their cultural and religious traditions.

It opens with an old world fable, which may or may not suggest some type of curse being placed on the ancestors of Larry Gopnick. It ends with the sudden impending doom of Larry and his family. In between we watch a man struggling to maintain his sanity while his life crumbles around him. Perhaps the moral is that no matter how much we play by the rules and attempt to live our lives as “serious” men, we are all still at the mercy of the whims of fate (or God).

Scott, Eric is right about the religious angle. I found your statement that it's “like the story of Job only without all that religious faith and God stuff” to be baffling. It's true that God doesn't actually speak directly to Larry like he did to Job but religious faith (or the lack thereof) plays a huge role in the story.

The Coen brother's biggest talent is their ability to create believable and memorable characters and then give those characters interesting, intelligent and witty things to say to each other. Larry seeks religious council from several rabbis over the course of the movie. The junior rabbi gives him nothing but platitudes, the senior rabbi tells him a stock story about a dentist that supposedly has some vague meaning that relates to his problems, and the legendary (semi-retired) Rabbi Marshak refuses to speak to Larry at all. Although he later shares a funny scene with Larry's son where he quotes from the lyrics of Jefferson Airplane.

Are the Coen brothers saying that the answers to our problems can only be found within ourselves? Maybe. Eric, I see your point that they often seem to make movies for themselves but that's just in the details. They also make movies that deal with universal themes and life experiences.

Sure they can be a bit pretentious with their symbolism and obscure allusions. Take the scene where Larry argues with a record club salesman over the phone for example. He refuses to accept the Santana album Abraxas (which, by the way, wasn't released until 1970, 3 years after this movie is set). As everyone knows (not really) Abraxas is a Gnostic word for God as well as being the etymological root for the term “abracadabra”. Therefore the Coen's have Larry symbolically rejecting both God and magic. I can just see all those film students getting worked into a lather over that.

The cast of mostly unknown actors all do solid work. Michael Stuhlbarg gave an Oscar worthy central performance in my opinion. I felt his growing frustration as he faces crisis after crisis without anyone to lean on for emotional support.

Chalk up another winner to the Coen brothers. They've crafted a film that's equally entertaining and compelling. A story about a suburban American family facing life's foibles from a distinctly Jewish perspective.