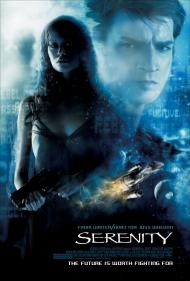 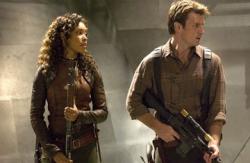 Watching Serenity is kind of like being invited to a party filled with interesting people involved in a complicated business, none of whom you've ever met before. It doesn't take long to figure out who's who as they're all archetypical characters, but the entire time, you can't help but feel like you're missing out on something.

Based on the short lived television series Firefly, Serenity tells the story of a down on its luck spaceship crew in the distant future. It's sort of a cross between Star Trek, Star Wars and an old Western TV show from the fifties. Like Star Trek, it follows the adventures a spaceship, like Star Wars the crew is opposed to a large galactic empire and like a Western, the setting is the wild frontier. The clothes and even the dialogue are also highly reminiscent of a Western. It's an interesting amalgam of ideas that sometimes works and sometimes doesn't.

The general thrust of the plot involves an agent of the government following the Serenity (which is the name of the ship), in an effort to recapture River, a young girl who's not only a psychic but one hell of a fighter. Trained by the government to be their agent, River was rescued by her doctor brother and they've been taken on as refugees by the crew of Serenity. While I'm guessing most of this was detailed in the series, it is given a reprise here at the beginning of the movie.

During the course of the chase across space, other things do happen in an episodic manner. In fact, you can almost see where the episodes would start and end if this were still on television. Supporting characters come and go (some quite violently) but they are introduced so quickly that it's hard to care, unless you are already familiar with them. The fan reaction from others in the theater when I saw this movie was loud and raucous whenever a familiar face appeared, but to me they were just minor characters.

The cast, mostly unknowns, are all quite good, but even they are given less time to develop as characters than they probably should be if this was their first introduction. Nathan Fillion is excellent as the Captain of Serenity and is clearly the star of the show. The rest of the crew though is never given enough time to become three-dimensional.

Joss Whedon, the creator of Buffy the Vampire Slayer, writes and directs the movie and the script is filled with lots of Whedonisms. There are the witty remarks following a fight, quirky dialogue and (inevitably) an inspiring speech by the Captain. Although this marks Whedon's feature directorial debut, he had already directed numerous Buffy and Angel episodes. He handles things nicely, keeping the pace moving, but I only wish he had looked at the movie more closely with the eyes of someone new to this universe.

I'm sure fans of Firefly will love this movie. It's a nice gift to them. The rest of us though, might be left wondering what all the fuss is about. Now if Whedon ever decides to do an Angel or Buffy movie, I'll be watching with rapt attention from inside the devoted fan circle. 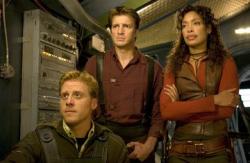 I have never seen a single episode of Firefly but I really like Serenity. I like it a lot. So much so that I will write that it is the best science fiction action film of it's kind since the original Star Wars. That is to say, like Scott, I saw in it the very things that made Star Wars and Star Trek so good. A bunch of likable characters up against great odds and exploring new worlds.

Nathan Fillion does a great job as Mal. Fillion is probably most recognizable for guest appearances on Buffy The Vampire Slayer and from Two Guys, a Girl and a Pizza Place. Ryan Reynolds starred but Fillion honed his great comic delivery on that so-so show and uses it to good effect in Serenity. His only other film role worth noting is that of the wrong Ryan in Saving Private Ryan. Fillion's Mal is a commanding captain who is hardly perfect and not always in the right place at the right time. He is a cross between Han Solo and Captain James T. Kirk.

Although new to the characters I enjoyed them none the less. I wish Wash had not died. He had a small role but having a married couple in a science fiction/action film is quite unique. It was a character that this old married reviewer could root for. Alan Tudyk was so good in A Knights Tale that his character could have done more in this film. I hope there is a sequel but will certainly miss Wash not being in it if one is made.

Serenity is brave, in Hollywood terms, in that it mentions religion through out the movie. The charater Sheppard preaches Christianity. Mr Universe gets married in a Jewish ceremony. Inara lights incense as in a Budist ritual. The movie wimps out in that Mal is religiously ambigious. It does not really matter to me if he is religious or not but it would have been quite brave of Whedon to have the main character express some religious point of view. When was the last time an action hero was also religious?

The movie is a bit episodic, like Scott wrote, but then it really has to be it if wants to introduce several characters and their setting as well as have a good action packed plot. The film often seemed a bit rushed but I was able to follow it all quite well and if a sequel is made Whedon will no longer have to set up anything. He can simply get on with the story and figure out a way to bring Wash back.