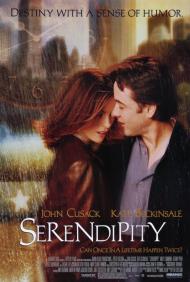 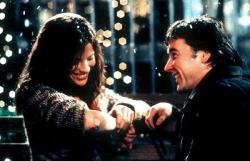 Webster's tells us that Serendipity is the faculty of making fortunate discoveries by accident. The movie Serendipity tells us that this happens all the time. Once about every five minutes or so, at least to the characters in this movie. It is a theme, which at first you laugh at, then become incredulous over, but eventually accept as a part of this movie's landscape. The random acts of near misses, and lucky discoveries are interwoven with enough skill that you just accept that they are happening instead of scoffing at the unbelievabilty of it all.

That point aside, Serendipity, the movie, tells the story of John, (Cusack), and Sarah (Beckinsale), a young, attractive couple who meet by chance in Bloomingdale's department store when they both reach for the same pair of gloves. What follows is one of those perfect New York nights in which the stars align and the two fall in love. At the ending of the evening however, Sarah, who believes strongly in fate, decides that if they are meant to be together, they should let destiny decide their future. She writes her name and number in a book that she intends to sell to a used book shop, and has John write his name and number on the back of a five dollar bill. If either of them find the other's item, than they are meant to be together.

Flash forward a few years. Sarah is now living in San Francisco with a new age musician with whom she is on the verge of becoming engaged. John, still living in New York, is due to be married in just a few days. At this turning point in their lives, they find themselves looking back to that golden night and wondering what would have happened, if they'd pursued the relationship.

What follows is a series of near misses, serendipitous moments of near contact, leading up to the usual Hollywood love story ending.

The movie has some very funny moments sprinkled throughout it's length. Eugene Levy's Bloomingdale's salesmen, perhaps being the funniest. Unfortunately, it is also sprinkled rather more heavily with unfunny moments and poorly written dialogue.

It is the first half hour of the movie that is truly the most entertaining, thanks in large part to the chemistry between the two leads. After the flash forward, the movie never really finds it's comic footing. At times wandering into slapstick, golf ball to the back of the head, humor, and other times, slipping into touchy feely emotions which sound more corny than heart felt.

And I feel compelled to point out here, that while for the most part this movie, which was partially filmed in Toronto, manages to seamlessly blend the scenes filmed there, into the scenes filmed in New York, with the exception of one thing. Twice John is shown riding in subway car, where amazingly enough, the seats have cushions. Any New Yorker could tell you, this just isn't true in New York. A moot point, but one that jumped out at me.

The lone date movie in a sea of unromantic thrillers, perhaps Serendipity will do well at the box office, but then only fate can decide. 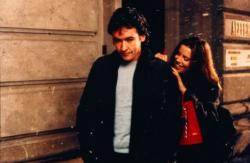 Scott wrote that the best part of this film for him was the first half hour where this couple has a magical night. This first meeting and connection. He liked the actors chemistry. I completely disagree with all of that.

You have two people meet and supposedly fall in love in one night. As I watched this movie I saw no sparks between them. They had Ice cream together. They went Ice skating together. They had superficial conversations like "What's your favorite New York moment?" and "What's your favorite sexual position?" The latter question never seriously gets answered. They talk endlessly about fate and play a game with elevators.

However, at no time did I ever feel these two people were making any kind of connection. It all felt more like they just had nothing better to do so why not just hang out together. Like the lyrics from an old song "If you can't be with the one you love then love the one your with." The only thing that appeared to make this night work was convenience. There really was no passion or intrigue into the characters that drew them together. They just seemed to have some free time.

Considering the whole set up didn't work for me, you can guess what I thought of the rest of the movie. I did not care if they got back together! Because I never thought they were together in the first place.

The supporting cast of Eugene Levy, Buck Henry, Jeremy Priven and Molly Shannon sounds good. But the material provides little to work with, so their parts go fairly unnoticed. The producers might as well have saved money and hired nobodies. Is getting hit in the head with a golf ball any funnier if its done to some one less famous?

Like so many romantic/comedies, that have come out since When Harry Met Sally, this one has a sound track of old standards. I love Louis Armstrong, but if the actors, director and script can't set a mood, then all the pop standards in the world aren't going to help.

Scott pointed out that the New York subway scene was obviously not filmed in New York because of seat cushions. Since we are really getting picky here I have one last thing to add. I wrote an article about how actors never zip up there jackets when pretending to be cold. Watch the first part of this movie where they are supposedly in New York in December. Yeah, that is how I dress when I am cold. My jacket wide open and my scarf dangling over my shoulder. After all, everyone knows you just wear a jacket for the slimming effect, and scarves are just there to set off your eye color. 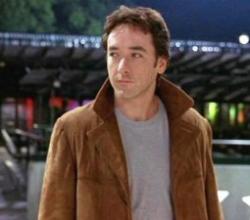 Serendipity is one of those frivolous little movies that manages to amuse provided you go in with the right mindset or if you are in the proper mood. This is contrived Hollywood romance in overdrive. It is completely implausible plot wise yet thanks to the plucky leads it works on some levels.

John Cusack has grown on me as an actor. He has outgrown some of his overly earnest acting that always marred his early work. Scott mentioned Eugene Levy who is funny but Molly Shannon steals every scene in her supporting role. But then I think anything the woman does is hilarious.

The pop standards, the snow, the camera angles are all intended to heighten the sense of the romantic. If you are cynical by nature this will undoubtedly turn you off. If, however, you enjoy this sort of thing then watch the movie. It is that cut and dried.