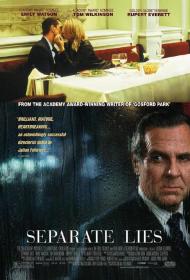 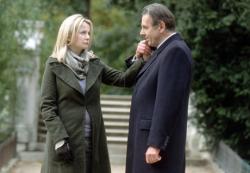 Separate Lies is the type of film that only the British seem able to do well. It is an emotional and dramatic film that takes you inside the seemingly happy, but deeply repressed marriage of an upper-class couple. The acting is all around brilliant and the writing is deep and nuanced. The story shows the domino effect of one lie, which leads to another, and another, unraveling the couple's lives and the lives of those around them.

Tom Wilkinson plays James Manning, a highly successful attorney. He shares a London apartment and a country estate with his younger wife, Anne (Watson). At first glance, they seem to have an idyllic life. But when the handsomely aristocratic William Bule (Everett) returns to the village where the Mannings live, Kate becomes infatuated with him, threatening what turns out to be, not such a happy marriage after all. Following the suspicious hit and run death of a local man, James, unsuspecting of his wife's feelings, thinks that William may have been involved in the accident. When he confronts Bule about it and learns the truth, the lies really begin to spread and multiply.

Perhaps the most intriguing aspect of this movie is the way in which Academy Award winning writer (Gosford Park), Julian Fellowes -- who also marks his directorial debut with this movie -- has cast no member of the love triangle as the villain. Even though at first it is easy to see certain members of it as being in the wrong, by the film's end, the roles of each character have become blurred. James was wronged certainly, but he lies along with the other two, agreeing to go along with them and taking his share of the guilt.

As he has done consistently, Wilkinson gives another great performance as James. The role of a successful, but stiff and emotionally absent, British authority figure is a part that's been done many times before, but he breathes new life into it. Watson and Everett both do a good job as well, but this is Wilkinson's movie.

This is definitely a movie only the British could make. Had this been an American film, there would have been anger, possibly a fistfight, followed by an ugly divorce. In a way it's like Masterpiece Theater for the 21st Century and fans of British drama will love it.