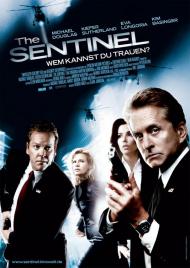 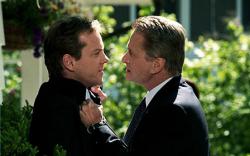 Kiefer Sutherland and Michael Douglas in The Sentinel.

The Sentinel is a fairly pedestrian thriller that is just good enough to not embarrass anyone involved in it, without ever breaking any new ground or really drawing you into the suspense. The surprise villain isn't hard to spot and at 62 years of age, Michael Douglas, while still in good shape, is pushing it a bit as the action hero lead. But in spite of these weakness the movie does still manage to lightly entertain and is never out right boring. Not glowing praise perhaps, but compared to some of the dreck that has come out of Hollywood, not all that faint of praise either.

Douglas stars as Pete Garrison, a Secret Service Agent who's been on the job for a long time. He was one of the agents who was shot during the Reagan assassination attempt. As the movie begins his current assignment is to guard the First Lady (Basinger). Since it is revealed very soon into the movie, I don't think I'll be giving much away when I also tell you that along with guarding her, he is also having an affair with her. Now personally, I think that is enough to brand him a traitor, but that avenue of discussion is never brought up in the film.

Two events occur in the same day that shake Garrison's professional and personal world. The first is when an old informant of his tells him that he knows of a traitor inside the Secret Service who is looking to help assassinate the President. The other is an envelope Garrison receives that contains compromising pictures of him with the First Lady.

When a series of events make it look as if Garrison is the traitor, he takes off on the run looking to clear his name and uncover the real traitor in the process.

Douglas has never been the most charismatic of stars. He did a very good turn in Wall Street, but I find that most of his other roles could have been filled more ably by other stars. Harrison Ford for instance, could just as easily and better played this part, with the added bonus that we probably wouldn't have had to sit through Firewall. That being said, as in most of his movies, Douglas is adequate in the part.

In smaller roles are Kiefer Sutherland and Eva Langoria as the two agents assigned to bringing Garrison in. Sutherland's character has a beef with Garrison since he believes him to have had an affair with his ex-wife. Langoria plays a rookie agent who was taught by Garrison at the academy. Her part is actually very small and only gets the press and the time in the previews because of her role on Desperate Housewives. She's not bad, but any generic attractive woman could play this part.

And that's the movie's biggest problem. The characters in the movie are so generic that they could have been played by almost anyone else. The story has a similar problem in that it carries a big, been there and done that feel to it.

Lightly entertaining, The Sentinel won't bore you while you're watching it, but it lacks anything to make you ever want to see it again. 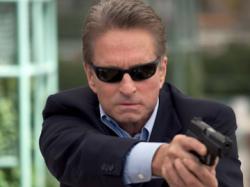 Michael Douglas in The Sentinel.

Exactly! If I ever see this movie again it will be too soon. Screen writing 101: The lead character must be likable to the point that the audience will root for them. Garrison is having an affair with The First Lady. As Scott wrote, this makes him a traitor to his country as his actions serve to undermine the office of the Presidency. But this is a Democrat President, (he backs Kyoto) and as Bill Clinton's Presidency tried to prove, sexual affairs don't matter.

Thus, I watched this movie not caring what happened to Garrison or The First Lady. The President is the real victim here. He is a target for assassination and his wife is unfaithful. In true Liberal fashion, the morally weak characters are played up as the good guys. The President has little screen time and is never played as a sympathetic character. He's just there.

The real hero in the movie is David, but his most notable personality trait is his insecurity about his relationship with his wife. By the end of the movie no one has even scolded Garrision about his philandering. He is shown leaving his job but it is not made clear if he is fired or retired. Either way, everyone looks at him as if he is a hero when in fact his very actions served to jeopardized the very life of the man he has sworn to protect as well as weaken the security of our country via the possibility of someone blackmailing him and or The First Lady.

The Sentinel is just another liberaly moral mess.