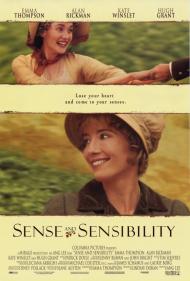 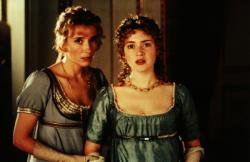 Emma Thompson and Kate Winslet in Sense and Sensibility.

This 1995 screen adaptation of the famous Jane Austen novel was nominated for an impressive seven Academy Awards. Emma Thompson won the Oscar for adapting the screenplay and it made her the only person to date to win for screenwriting and acting (she had taken home the Best Actress statuette for Howards End a few years earlier (the only person to win Oscars for songwriting and acting is also a woman, Barbra Streisand)). This version of Sense and Sensibility was in fact so successful that it launched a resurgence in the popularity of Austen's novels and was instrumental in bringing other adaptations of her work to the screen.

For those unfamiliar, Sense and Sensibility tells the story of Dashwood sisters, Elinor and Marianne, and their respective love lives. The older sister Elinor (played by Thompson) is reserved and introverted. She has plenty of sense but lacks verve and passion. Her younger sister Marianne (Winslet) has all the sensibility in the world but lacks restraint. Her fiery disposition is in direct contrast to her sister's placid demeanor.

The story begins with the death of their father and the subsequent displacement of their living situation. Due to the customs and laws of the time, their house is willed to their father's son from a previous marriage. Over the course of the story several men float in and out of these young women's lives.

Ang Lee directs with his usual eye for detail. The film looks lush and the costumes and sets are all spot on. This is the movie that made Kate Winslet a star two years before she survived the sinking of the Titanic. Emma Thompson is also quite good albeit a bit too old for the part. They play off each other well. Whereas Elinor keeps her feelings hidden and errs on the side of caution, Marianne's heart is an open book. In one scene, when speaking of the dashing John Willoughby (Wise) with whom Marianne has fallen madly in love, Elinor asks, “Did he tell you that he loved you?” Marianne answers, “Yes. No. Never absolutely. It was everyday implied but never declared.”

At the time of its release Sense and Sensibility was the first period adaptation of a Jane Austen novel in 50 years. It contains the perfect combination of cast, script and direction and the result is this exquisite motion picture.

Greg Wise and Emma Thompson in Sense and Sensibility

Although these sisters were kicked out of their home, I truly had a difficult time feeling much pity for them. They live a life of luxury before and after they move from one country estate to another. Neither has a job beyond daily routine. Their time is spent taking walks in the country and meeting unmarried men of means in hopes of turning one of them into a husband.

The men here are simply to perk the women’s romantic interests. Hugh Grant plays a nervous man, Edward, who has yet to decide what he wants to do in life. His quiet ways appeal to Elinor. Alan Rickman is Christopher; a well-traveled Colonel who constantly eyes Marianne with great interest. Greg Wise plays John, the dashing heir to a nearby estate. He rescues Marianne from the rain like a knight in shining armor, but Elinor finds him just as attractive as Marianne.

All of the men leave at some point for inauspicious reasons. It is later discovered that one of the men in question already has a girlfriend. The plot then simply becomes one of which man will end up with which woman.

The plot is driven by conversations in drawing rooms and gardens. As Patrick noted, throughout the movie we are treated to such distinctly British lines as, “I have no doubt of their mutual affection.” “Did you see him? He expressed himself well, did he not?” Although you need to see the previous scene to enjoy the joke, the line, “And I believe I know what key you will sing in. "F" major.” made me laugh out loud.

As this is based on a Jane Austen novel, everyone is prim and proper, at least on the surface. This is a sanitized world, far removed from the slums of London so prevalent in the writings of Charles Dickens. Austen, Emma Thompson and Ang Lee created a highly romanticized world of repressed emotions that struggle to reveal themself. Whether expressed or repressed, emotions still mean as much. As one of the gentlemen so states near the end of the film, “I've come here with no expectations, only to profess, now that I am at liberty to do so, that my heart is, and always will be, yours.”

Emma Thompson never intended to star in her own film, assuming she was, as Patrick mentioned, a bit too old for the part since Elinor was 19 years old in the book. She was convinced to do it by the studio and Ang Lee who suggested raising her age so that her portrayal of an old maid type would be more obvious to modern audiences, who wouldn't see a non-married 19 year old as anything unusual. It also helped secure financing for the film since at the time, following her Oscar win for Howard's End and nomination for Remains of the Day, her appearance in a costume drama leant it credibility. Her excellent performance certainly justifies her inclusion in the cast regardless of the age change.

Although it's true that even following their loss of fortune the Dashwood family is able to survive without employment, it's not difficult to feel sympathy for them. They are after all, only able to put up a social front at all thanks to the kindness of friends and family. From a modern perspective it's very easy to say that they could find employment, but times were very different then and opportunities for women were very limited. Forgetting their lack of training to do any real work, were they to take on menial work they would certainly be sacrificing their chances to marry someone from the upper classes. In a sense then, finding a suitable husband is their job.

And of course, as my brothers said, this is a very romantic film and not one of dirt and deprivation. Ang Lee, who reportedly had never heard of Jane Austen prior to signing on to direct, captures the idealized version of the Georgian era. It's a world where the women are attired in lovely dresses and learn the feminine arts of piano playing and sewing and they always look their best even when suffering from a fever. The men are courtly and dashing and any impropriety always happens out of sight, only to be mentioned after the fact in gossip shared in the drawing room. The outdoors is green and lush and it only rains for dramatic purposes and usually only when there is some handsome fellow at hand to sweep the heroine onto his horse.

Among the cast there's not a single bad performance. Winslet and Thompson are great as the Dashwood sisters, each learning something from the other by the film's end. They do upstage the men, but Rickman and Grant fill the suits admirably. The supporting parts are equally well cast. Emilie Francois provides some comic relief as the youngest of the sisters, as does the perpetually grumpy Hugh Laurie as Mr. Palmer.

The script is perhaps the real star of the film. Fans of the genre will relish the dialogue, spoken with repressed longing as only the British can speak it. Lines such as these only work properly with an upper-class English accent, "What do you know of my heart? What do you know of anything but your own suffering. For weeks, Marianne, I've had this pressing on me without being at liberty to speak of it to a single creature. It was forced on me by the very person whose prior claims ruined all my hope. I have endured her exultations again and again whilst knowing myself to be divided from Edward forever. Believe me, Marianne, had I not been bound to silence I could have provided proof enough of a broken heart, even for you."

Patrick mentioned the Austen renaissance this film sparked. There have been many other adaptations of her work since this one, but perhaps none have equaled it.