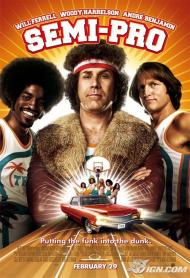 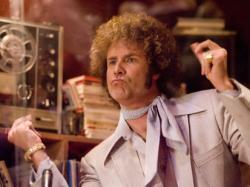 Will Ferrell in Semi-Pro.

Semi-Pro could have gone either one of two ways. It could have been a Will Ferrell comedy ala Anchorman or Talladega Nights; where Ferrell and his usual cast of cohorts act very silly and outrageous, or it could have tried to be a sports movie with heart; featuring a cast of lovable losers who pull it together to win a championship. The marketers of the movie certainly knew which kind of movie they wanted this to be. They clearly advertised it as typical mad-cap Ferrell zaniness. Despite that, this movie ends up trying to be both and never quite succeeds at either.

Ferrell plays Jackie Moon, a one-hit music wonder -– his hit song was "Love Me Sexy" -- who used the money from his short-lived success to buy The Flint Tropics, a basketball franchise of the ABA. The ABA, for those too young to remember, was the American Basketball Association which tried to rival the NBA during the 1970s, which is when this movie takes place.

Moon not only owns the franchise, but he also coaches it and plays on the team. When he learns that the ABA's top four teams will be absorbed by the NBA at the end of the season, Moon becomes desperate to win. He trades the team's washing machine for Monix (Harrellson), a former NBA player well past his prime.

Moon is a typical Ferrell character; bigger than life, convinced of his own animal magnetism, and no attempt at playing him realistically. What laughs there are to be found come directly from him. They don't come that often or that big, but he does manage to be amusing. The funniest scenes in the movie involve him and the bear he agrees to wrestle in an attempt to increase attendance to his games.

Harellson as Monix, on the other hand, takes over coaching the team, putting them on the winning track. He also looks up an old girlfriend of his, whom he cheated on in the past. He's clearly the star of the heart side of the movie, as he tries to bring some small amount of glory back into his life and the life of his teammates in a B Sports Movie kind of way.

The two sides of the movie make for an awkward match and ultimately, it isn't a good enough sports movie to please sports fans and it's not an outright funny enough movie to please Ferrell's fans. 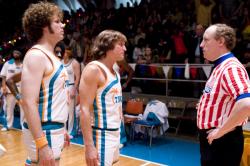 Will Ferrell and Woody Harrelson in Semi-Pro.

Will Ferrell is like the movie stars of old. You always know what to expect from him. His characters almost always have the same personality traits. They are always arrogant and self serving. This is a persona ripe for jokes, as long as the material is suitable.

Semi Pro works when Ferrell gets to act up. Scott praised the bear scene. My favorite line is, “Use small children as shields, bears like soft tender meat.” Other gags, like the mascara scene are not as funny as someone obviously hoped they would be.

Ferrell tends to surround himself with funny actors but few get to upstage him. Andrew Daly and Will Arnett play the funniest pair of commentators since Jim Piddock played the straight man for Fred Willard in Best in Show. During one game, Daly says to Arnett, “Lou, would you mind putting out that cigarette, it's very unprofessional.” Lou responds, while lifting a glass, “No. I like to smoke when I drink.”