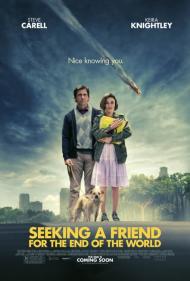 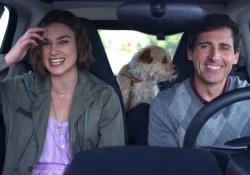 Kiera Knightley and Steve Carrell in Seeking a Friend for the End of the World.

Seeking a Friend for the End of the World is a quirky little, offbeat movie that charms and entertains despite a couple of misfires. Given that the plot revolves around the end of the world and much of the humor is centered around that concept, your level of enjoyment will depend upon how easily you're able to laugh at that situation.

The story opens with the announcement that an Armageddon type rescue mission to destroy an asteroid that's headed towards the Earth, has failed and that all life on Earth will be destroyed in three weeks time. Not exactly your typical comedy opening, but quite a bit of comedy is mined from the situation as people react differently to the situation. Some party like it's the end of the world, losing all inhibitions, while others continue obliviously on with their lives.

Dodge, played by Steve Carell, hits the road with his next door neighbor, Penny (Knightley), in search of an ex-girlfriend who was the love of his life. They escape some looters in her car with his vague promise to help her get home to England somehow. What follows is a buddy, road movie that unwisely tries to morph into a love story.

Carell and Knightley have a nice comic chemistry together. He plays stiff and repressed while she's free-spirited and quirky. It's a potent combination, but then half-way through, the story tries to link them romantically and it's a mistake. I never really bought into it. That she was a friend, almost a daughter figure for him, who could teach him to try and live life even if it was just before the end, is one thing, but that he's in love with her and she him, is quite another. Their relationship goes from feeling natural to something forced to fit into a formula. It doesn't irreparably damage the movie but it does weaken it.

The other aspect of the movie that I found to be slightly weak is Carell's performance. He plays it very low key, which works at first, but he maintains that same low level throughout the movie. I kept waiting for him to erupt and show some emotion, but that scene never really happens. He doesn't do a terrible job and in fact I quite like him, but I just wanted to see more by the film's end.

Despite those complaints, this is a movie that I enjoyed immensely. Not only did I laugh quite often, I'm also not ashamed to say that I got a little misty by the end, which I don't want to spoil. Certain aspects of it are predictable and sentimental, but by that point the movie had already won me over and I simply didn't care.

I really hope this movie finds its audience and I believe it will, even if not upon its initial release. It's quirky and funny enough that I think it will live on in DVD and downloadable formats. 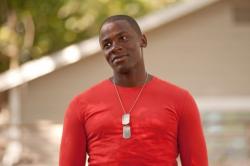 Derek Luke in Seeking a Friend for the End of the World.

I pretty much agree with my brother. This is a quirky little offbeat comedy that misfires in the second act. What I disagree with him about is just how much damage the forced romance between Dodge and Penny does to the movie. For me it nearly ruins it. That plus the uneven tone. It starts out as an absurd end of the world Steve Carell comedy but morphs into a touchy-feely end of the world Keira Knightley romance.

The party scene at the beginning is hilarious. Picture your typical suburban family having some friends over. Only the dad is giving his young daughter a martini and telling her to, “Fight through the burn.” The mom opens the door for new arrivals and announces in a cheerful singsong voice, “You guys look. Sarah and James brought heroin.”

At this point the movie had me. I also thoroughly enjoyed the television anchorman's habit of combining catastrophic reportage with the mundane. “Matilda will be arriving one week ahead of schedule. The point of contact is 16 hours, 26 minutes away so be sure to mark your calendars. Also a friendly reminder to set your clocks ahead one hour for daylight savings time.”

The scene at Friendly's, the TGIF type restaurant where everyone is deliriously perky, also had me laughing.

But why in the hell they ruined it with that sappy ass ending is beyond me. Who would ever believe Knightley would choose Carell over the hotter-than-July Derek Luke? (see photo) He even has a survival shelter and six months worth of supplies.

I'll grant you Dodge's reunion with his father (played by Martin Sheen) was genuinely poignant. I was moved by their scenes together. But the decided lack of even the tiniest romantic spark between the two leads causes the ending to fall flat.

The script should have either committed to the sillier aspects of the story (in which case Steve Carell was perfectly cast) or been more of a straightforward romantic drama (in which case Carell should have been replaced). As it is, Seeking a Friend for the End of the World is a schizophrenic mess with a few laugh out loud moments and one or two touching scenes that don't belong in the same movie. 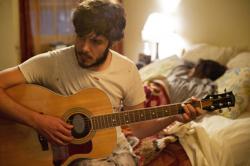 Adam Brody as Owen, in Seeking a Friend for the End of the World

I agree completely with my brothers that the humor works far better than the romance. I liked the party scene and the news casts Patrick mentioned. "Put on some Radiohead. I want to do heroin to Radiohead." When the news anchor goes to a traffic reporter, all that he gets from her is, "We're fucked, Bob." One comedic character he did not mention was Adam Brody as Knightley's lay about boyfriend, Owen. I hoped he would have gone on the road trip with them.

Scott wrote that your level of enjoyment will depend upon how easily you're able to laugh at the concept of the world coming to an end. I found it hard to laugh at people who were not acting as I believe they would. This is most notable in the fact that many people continued to go to work. Why were pilots still flying people around? Why was the cop concerned about a speeding car. Probably every car is speeding. When Carell goes to buy some cleaning supplies, the joke is that the owner has raised all the prices. Really? Why was his place not looted or he himself moving his product to a basement, in hopes that he will survive? Either way, a high price is hardly much of a joke in such a situation.

There is a suicide and a riot, but I never bought that people were acting accordingly. The worst depiction was Carell's Mexican maid, who diligently shows up everyday and cleans his house. Are they saying she is stupid or is this a joke that Mexicans are such hard workers that they would show up to work even if the world was coming to an end? Either way, I found how her character was written to be racially offensive.

At first I thought Scafaria was making an analogy. That by the end of the film we would learn that the world really was not coming to an end but that Carell just saw the world around him as if it were because his wife had just left him. The end of the world being an analogy for his own life. The riots representing how he saw the world in chaos. The high price of groceries and Derek Luke and his friends in a basement playing video games to pass time speaks for itself. Him remembering a past love after becoming single is likewise understandable. Everything he experiences could have been how he saw the world in his depressed state.

Alas, the film is not that deep. As my brothers wrote, the romance between Carell and Knightley is one more of convenience than one of any real feelings of love. Again, had this all been filtered through Carell's mind I would have bought it. People often imagine someone has feelings for them when they actually do not.

Seeking a Friend for the End of the World has some laughs but is ultimately a disappointment.