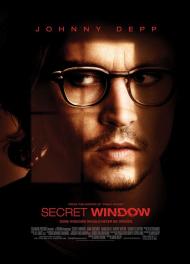 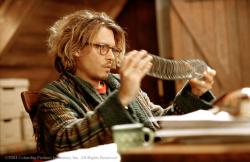 With Secret Window, we are once again presented with a thriller featuring a 'twist' ending that betrays most of what has come before it. What starts as an entertaining if slightly unbelievable movie evolves in the last act into something weaker with an ending that you can see coming, but were desperately hoping wasn't. I haven't walked out of a movie theater this angry at a film since last year's Identity.

Johnny Depp plays Mort Rainey, a writer going through a divorce. In a state of depression, he's living in a cabin in upstate New York trying to cope with having discovered his wife's affair with another man. His solitude is disrupted by the arrival of John Shooter (John Turturro), a mysterious stranger who claims that Rainey stole one of his stories from him; an act that Rainey vehemently denies.

This early portion of the story is easily the best. Depp is comic and charming in the first act, which is virtually a one-man movie. After Shooter's arrival, the movie takes a darker and more unbelievable tone of the kind you can expect from a story based upon a Stephen King story. The question that baffled me during the movie was why Rainey would remain in his isolated cabin after being continually threatened with physical violence.

Like most thrillers, there are plenty of subplots to keep you guessing what is really going to happen. Timothy Hutton plays the man with which Rainey's wife (Maria Bello) had the affair, and is now pushing Rainey to sign the divorce papers. Charles S. Dutton makes a small appearance as the Detective Rainey brings in to investigate Shooter. Together, the background characters create a lot of noise in an effort to cloud the story.

The best thing this movie has going for it, besides Depp in the lead role, is the tension it manages to build in the quieter moments. There are several scenes that make you jump and the atmosphere is quite suspenseful at times.

Sadly, just when the movie is ticking along nicely, the 'twist' gets thrown in and wrecks the whole thing, making most of what's happened earlier in the story completely meaningless. Some movies with a twist give you a satisfying feeling of, "Oh, that's why this or that happened. I get it now." While others leave you going, "What the Hell? That's just stupid." Secret Window is the latter kind.

Entertaining with its stage play like setting at the beginning and featuring Johnny Depp who remains at the height of his acting game, Secret Window just falls apart when its secret is revealed.