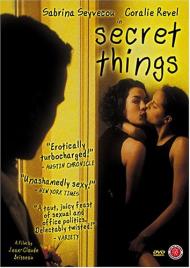 Christophe watches Nathalie and Sandrine before joining in.

They forge a plan to enter the business world using their feminine whiles to get ahead.  They figure their looks and body can manipulate the right men to get them where they want to be.  They both get hired into two different departments of the same company.

The movie centers on Sandrine as she fends off the advances of a co-worker while setting her sights on the married boss, Delacroix, and the son of the owner, Christophe.  Christophe has a reputation of breaking women's hearts.  His looks, money and charm are so affective that rumors exist that women have even killed themselves over him.

The games begin and Sandrine soon finds herself having an affair with Delacroix.  She learns some disturbing news about Christophe and Nathalie seems to be keeping a secret.  Although the two women share several sexual encounters with each other, they are both straight.  Something Christophe takes advantage of.  Before we know it, we are not sure who is manipulating who.

The sex will keep you interested, but it all spins out of control by the end.  The weak plot just keeps getting darker and harder to believe.  Neither girl is honestly likable.  At least they are good looking and are not shy about taking off their clothes.  The best way to watch this movie is to just fast forward to the next sex scene.