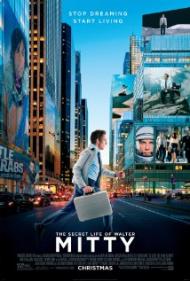 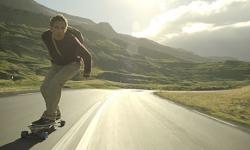 The Secret Life of Walter Mitty is one of those films that are intended to inspire and encourage. Since we all day dream from time to time, there is a little of Walter Mitty in all of us and we all can, on some level, relate to him. However, as much this story may try, it only once takes us to the place it needed to.

Ben Stiller directs and stars as Walter Mitty, a quietly dedicated Life Magazine employee. He works with film negatives that arrive to be printed as photos for the magazine. He pines for a new employee, Cheryl, played by Kristen Wiigg. He constantly zones out while having a day-dream about his life being adventurous and romantic.

Sean Penn plays a freelance photojournalist who travels the world for his work and sends Walter his film to be developed. Sean lives the kind of life that Walter fantasizes about. As the film starts, we learn that Life is folding as a magazine. It will only publish one more issue with a cover photo provided by Sean, through Walter. The only problem is that Walter cannot find the negative.

With only a few clues to go by, Walter sets out on a real life globetrotting adventure to find the enigmatic Sean. Walter swims in an ocean and climbs mountains. In Iceland, Walter skateboards from one city to another. The entire route is a winding incline on an empty country road surrounded by mountains. That scene is to me the greatest representation of what freedom feels like. He is alone in the elements. The ride is exhilarating, a little dangerous and he has no idea what he is going to find when he gets to the next town. Walter is finally experiencing that beautiful thing called life.

That moment is the highlight of the film for me. Right then and there Walter is experiencing a euphoria he has never known. He has awakened something inside of himself that has been asleep since he was a child. For me that is the film’s climax. It matters not if he finds Sean. It matters not if he wins Cheryl’s affection. He has found that mystical moment of nirvana where life is at its most exciting. Within that moment Walter is everything and more than he ever dreamed he could be. No pressure, no stress, just the wind and the road and the anticipation of what is around the next bend.

Unfortunately, that is nowhere near the end of the film. Walter has more searching to do. There are more travels and conversations to be had. None though, compare to that moment on the skateboard. Walter constantly plans and keeps track of his budget, but learns that unexpected moments are the real highlights of life.

The Secret Life of Walter Mitty is a feel good movie. It intends to leave us with a smile but I instead shrugged. The plot seems to meander without a real goal in mind and the ending is none too exciting or emotional. The plot line involving EHarmony is more product placement than cute. Sure, Walter wants to get Cheryl and find the negative, but the real destination is Walter opening his eyes to the fact that life is a banquet and he is starving to death. As I left the theater I thought not of the ending or resolution to Walter’s problems, I just kept imagining how awesome it must have felt to skateboard that long distance in such a scenic locale. As the saying goes, life is about the journey and not the destination. 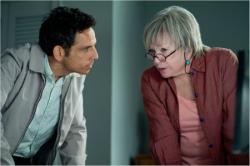 Ben Stiller and Shirley MacLaine in The Secret Life of Walter Mitty.

The Secret Life of Walter Mitty was author James Thurber's most famous short story. First published in 1939 it told the story of a mild-mannered suburban husband who daydreams of partaking in heroic adventures. It was made into a movie in 1947 (although with many significant plot changes) starring Danny Kaye. Now Ben Stiller gives us his rendition.

I enjoyed it more than Eric, although I concede his point about the emotional peak occurring on that winding Icelandic road. The remainder of the movie kept my attention though, as I really wanted to see him find Sean, retrieve the missing negative, and get the girl. My least favorite parts of the movie were the beginning. Ironically, although they are the most famous component of the story, I could have done without the daydreams or at least with a few less of them.

Once Walter arrives in Greenland the story really picks up. As does the humor. It's the funniest part of the entire movie. The drunk helicopter pilot doing an incredibly awful Karaoke rendition of “Don't You Want Me” is worth a few laughs, as is the boat crewman with a penchant for outdated American pop culture references. “Stay gold, Ponyboy!”

Ben Stiller is the perfect actor to play Walter Mitty. He can play nebbishy in his sleep but he can also turn on the charm and play heroic as well. His growth over the course of the movie seems quite natural. I have to mention the legendary Shirley MacLaine, still acting as she approaches her 80th birthday (see photo). She has only a few scenes but brings a certain gravitas to the proceedings.

While not a classic, The Secret Life of Walter Mitty was a pleasant surprise. It was actually better than my expectations for it were. It's definitely a fantasy film that wants to inspire and warm hearts. If you keep your expectations low, as I did, you just might find yourself enjoying it more than you ever imagined. 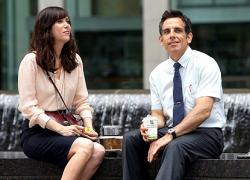 Kristen Wiig and Ben Stiller in The Secret Life of Walter Mitty.

I agree with Patrick. Lowered expectations definitely helped me enjoy this film. It's not a classic, but like him I was emotionally invested enough to want to see the story to its end. Sure, the ending is a foregone conclusion, but I still wanted to see it through.

The real Life magazine stopped publishing as a monthly in 2000 and I'm not sure why the story wasn't set in that year. There's a slightly old fashioned feel to some of the small elements to the story. The way Walter is unable to contact Sean, or the way there's an entire department dedicated to real negatives instead of digital photography, or even tiny things like the way Walter is in line to pick up a paper paycheck. The only piece of modern technology is the smart phone, for which Walter must have an amazing service provider as he's able to receive calls in the middle of nowhere in Iceland and on top of the Himalayas in Afghanistan. There's also an inclusion of E-Harmony, but as Eric wrote, it feels like product placement more than anything else. And are we really supposed to believe that a customer service representative would really keep calling Walter to get his details?

As both my brothers wrote, the emotional peak of the story takes place in Iceland about half-way through the story. Actually though, instead of it happening on the skateboard, I felt that it took place the moment Walter leaps onto the helicopter in Greenland. That's the moment where he changes forever. From there the story does become dragged out. Instead of going back to New York and then out again to Afghanistan, he should have just located Sean in the mountains of Iceland. Plus, Walter's hike through the mountains is rather silly. He winds up hiking through the mountaintops at a high altitude where he could easily get lost or freeze to death, but somehow he's able to find his way without problem and even receive the aforementioned phone call.

Visually the movie is quite beautiful. The scenery in Iceland is particularly well shot and I wonder if tourism to that country won't receive a boost because of this film. The fantasy sequences are also well done, although I agree with Patrick that they are in danger of stretching out a little too long in places.

Although this is more about Walter's journey than it is a true love story, Stiller and Wiig share a nice chemistry. She's known more for broader comedies, but she shows here that she can be effective in a more subdued role.

There's a nice message to this story and it's wrapped in a pretty package, even if it's not delivered in the perfect manner.