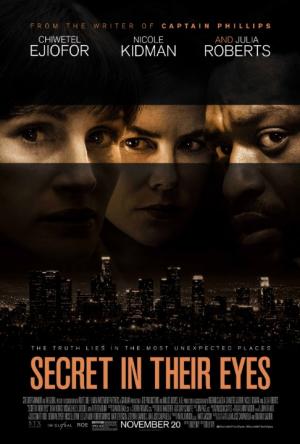 Julia Roberts, Nicole Kidman and Chiwetel Ejiofor in The Secret in Their Eyes

Secret in Their Eyes is a remake of the Academy Award winning film El Secreto de tus Ojos (2009) from Argentina. It is told in two different times. One is in 2005 and the other from 13 years earlier. It begins in 2005 with Ray Kasten (Chiwetel Ejiofor) making a discovery in Boston that sends him across the country to California to visit his old law enforcement partner, Jess Cooper (Julia Roberts). Through flashbacks we see them working with the FBI investigating some possible terrorists sleeper cell in a Los Angeles Mosque. Also in the picture is a DA, Claire Sloane (Nicole Kidman), whom Ray met in 2002 when she was a prosecutor and fell for her.

Ray is there to inform Jess that he has a new lead on the where about of her daughter's killer. Jess is visibly shaken to hear such news about such a dark subject. Then in flash back we see that a rape/murder took place near the Mosque being watched. Sent to investigate it, Ray and Jess discover that the victim was Jess's 18 year old daughter. It is truly a powerful scene watching Julia Roberts cry over her daughter's corpse. Things then get even stickier when it is discovered that the number one suspect in the murder case is the FBI's mole inside the Mosque. Being a year after 9/11, the FBI is hot for any terrorist bust and actively impede in Ray's murder investigation. Jess meanwhile, not officially allowed to look for her child's killer, does so on her own time.

El Secreto de tus Ojos was a critical and financial success, while Secret in Their Eyes was neither. I have never seen the original but read that the biggest difference is that the original film was about a man who lost a wife and not a mother who lost a daughter. Also, the original was far more graphic and adult. I am not sure how closely other aspects of this film followed the original, or if the twists are the same in each. Either way, I was caught up in the investigation and how it would all turn out even if the script is occasionally weak.

The general idea of protecting one possible killer from being brought to justice to potentially prevent another terrorist attack is interesting in and of itself, especially when you show it so personally. However, some of the details are a bit ridiculous. Spoiler alert: I groaned audibly when Claire gets a killer to confess by commenting to him that he could not possibly have a big enough penis to do the vaginal damage the rapist did. Yep, us men we only think with our dicks. In 2002, Ray subtly, yet obviously, pursued Claire pretty much in every scene they share but they never have any kind of an affair. In 2015, Claire's husband comes home to find Claire and Ray talking in the living room. He asks snarkily, "Is he moving in? He may as well, he's been here the past 13 years." Which means that Claire has spent the past 13 years talking about a man she never had sex with but still did so to the point that it became clear to her own husband that she wish she had. I never bought their relationship as they really only spend a brief amount of time together.

One interesting aspect to the film is the casting of Julia Roberts and Nicole Kidman, both of whom were born in 1967. Roberts plays Jess without any flattering makeup what-so-ever and may I say, the words "pretty woman" sure as hell did not come to mind. Meanwhile, Kidman's face is a Botox dumping ground. Her cheeks are so high they threaten to force her eyes shut. Not since Gene Tierney have I seen such natural cheek bones.

Secret in Their Eyes is a worthwhile film for fans of the stars. Each of the three leads get their moment but Roberts easily has the juiciest part. She makes the most of it, even though she looks old and worn out. Which, considering all that her character goes through, is the point, especially when we discover the secret in her eyes.