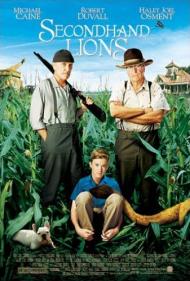 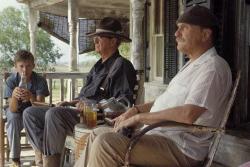 Sometime in the late 1950s or early 60s, 14 year old Walter (Osment) gets dumped off with his great uncles. His single mother (Kyra Sedgwick) has heard the tale that the two men are hiding millions of dollars somewhere on the property. She tells him to spend the summer seeing if he can find where they hid the money.

His two uncles are not keen on the idea of having him around, but of course learn to warm up to the company. When Walter first sees his uncles they are fishing-with their shotguns. He is, at first, completely uncomfortable with these two larger than life men.

Garth (Caine) starts telling Walter stories about his and Hub's (Duvall), past. These stories are shown as flashbacks as Caine narrates. Christian Kane (Angel, Just Married) plays Hub at a younger age. He's a sword wielding action hero who has just one line. These flashbacks are like out takes from Raiders Of The Lost Ark. They are so outlandish that you wonder how much of them are actually supposed to be true.

According to Garth's stories, he and Hub were traveling Europe when they got shanghaied into the French Foreign Legion, and Hub fell in love with an Arabian Princess. True stories or not, Walter learns to respect and love these two old men, and they do the same in return.

The stories being either truth or fiction are not the point. The point is that we believe what we want to believe. In one poignant scene Hub tells Walter that believing in a lie can sometimes be just as important as believing in a truth.

Secondhand Lions has a beautiful symbolic side story line. The eccentric uncles buy an actual lion to hunt on their property. However, the lion turns out to be so old that it won't even run away from them so Walter ends up making it a pet. Pretty soon, the Lion is healthier and happier. The same can be said of the two old men after Walter came into their life.

Writer Tim McCanlies has a way with boys in search of a father stories. His The Iron Giant is one of the most under appreciated animated movies of the past 10 years. Walter's plea to his mother, to 'do what's best for me,' at the end of this movie is heart shaking. This movie has humor and action, but most of all it has lots of sentimentality. 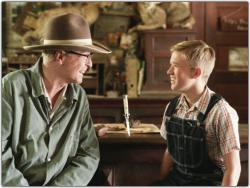 I pretty much agree with Eric's opinion except that I wanted a bigger emotional payoff. The humor and action were fine, I just wanted more sentiment.

Artistically it probably made sense for the story to be so 'larger than life'. It is, after all, a man's memories of the summer he was 14. So naturally he would exaggerate his uncle's behavior and the events of that time. It is just a bit harder to get emotionally involved in the story because, in style, it is more like a tall tale than a realistic coming of age movie.

Still I did enjoy Second Hand Lions. Michael Caine and Robert Duvall seem to be enjoying themselves in every scene. And though it is Caine's Garth that does most of the storytelling and narrating, it is Duvall's Hub who gets the two meatiest speeches.

Eric mentioned one. When he tells the young Walter, “Sometimes the things that may or may not be true are the things a man needs to believe in the most. That people are basically good; that honor, courage, and virtue mean everything; that power and money, money and power mean nothing; that good always triumphs over evil; and I want you to remember this, that love... true love never dies. You remember that, boy. You remember that. Doesn't matter if it's true or not. You see, a man should believe in those things, because those are the things worth believing in."

The other one is when Hub is confronted by a bunch of rowdy young punks at the local bar. In response to being asked “who the hell he thinks he is." Hub replies, “I'm Hub McCann. I've fought in two World Wars and countless smaller ones on three continents. I led thousands of men into battle with everything from horses and swords to artillery and tanks. I've seen the headwaters of the Nile, and tribes of natives no white man had ever seen before. I've won and lost a dozen fortunes, killed many men and loved only one woman with a passion a flea like you could never begin to understand. That's who I am. Now, go home, boy!" He then proceeds to kick some butt.

I guess I wanted this movie to be a superb classic. It very nearly is. It just falls short in the emotional wallop department. 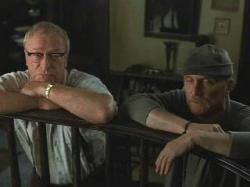 Patrick, I'm not sure what more of an emotional wallop you wanted for the ending. I thought it was plenty emotional. I thought it was touching and loaded with sentiment. I don't know how it could have taken on much more without becoming ridiculously sappy. It is really only the talented and experienced performances of Duvall and Caine, coupled with the rising talents of Osment that keeps this movie from going overboard and becoming too sentimental.

I agree with you Patrick that Duvall and Caine seem to be having a great time here. They share a crusty old chemistry that works to great effect. You can easily believe that they've been living together for decades in eccentric solitude. It would be hard for any actor to stand up against these two heavyweights, but young Osment manages it.

The tales Caine tells are light, fun and told well. They break-up the sappiness at the farm well and keep the story clipping along nicely. Although actually Eric, they reminded me more of outtakes from Jewel of the Nile than Raiders of the Lost Ark.

Of course in reality the summer Walter spends with his Uncles is just as unrealistic as the stories they tell him. No summer and no such uncles ever existed, but like Walter in the story, we want to believe that they could.