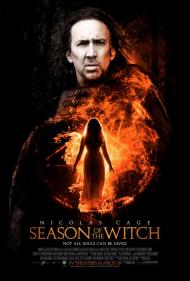 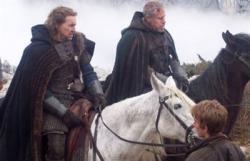 Nicolas Cage and Ron Perlman in Season of the Witch.

Nicolas Cage has become the king of the B-Movie these days and Season of the Witch is a prime example of that.  It has an interesting premise that just isn't executed very well.  Apart from some nice visuals there's just not very much worth seeing in it.  And the script takes itself so seriously that audiences are even deprived of unintentional humor.

Set in the 14th Century, the movie tells the story of two knights who have grown tired of the crusades and so deserted from the army.  On their journey back from the Holy Lands they come across a country suffering from a plague.  The locals believe that the disease is caused by a witch that they've captured and they ask the two passing knights to deliver the witch to a nearby abbey where they supposedly have a book that will remove the witch's curse.  Reluctantly the two knights agree, but Behmen (Cage) starts to wonder if the witch really is a witch or is there something more sinister going on?

Easily the worst thing about the movie is the writing.  The dialogue is awkward and stiff and doesn't sound like anyone actually speaks.  The characters are given zero depth and it's difficult to care about any of them.  The premise is promising, but it never fulfills that promise.  The plodding pace makes its relative brief running time feel much longer.

Cage seems bored through most of the movie.  Occasionally he throws in some sort of English accent, but it comes and goes so erratically it's difficult to pin down.  Perlman, while saddled with just as bad of dialogue as Cage, somehow fares a little better, if only because he smiles occasionally and doesn't seem to be taking the proceedings quite so seriously.  Claire Foy does a decent enough job as the suspected witch, making you wonder whether she is or isn't evil for at least the first part of the film.  Christopher Lee is virtually unrecognizable (apart from that great voice of his) in a small part that could have been played by almost anyone.

Visually the movie does deliver occasionally.  Several scenes are dark and eerie and there should have been more of them.  A night attack by wolves is shot well, although the altering of the wolves' faces by CGI is overdone. If the supernatural, horror elements had been played up, the movie might have been more effective.

The action scenes are also undercut by the poor script.  Because I never really cared about any of the characters, I was never exactly on the edge of my seat with worry about them when they were attacked.

Although originally scheduled for release last March, it seems fitting that it was held back until January, the traditional graveyard of movie releases, since you can mark this one dead on arrival. 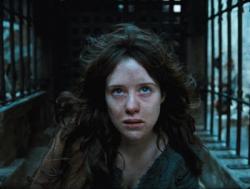 She does not have a big nose, and has not turned anyone into a newt. Still, I wonder if she weighs the same as a duck?

The first mistake was opening the film with the hanging of some witches.  This takes away all of the film's mystery.  Had that scene been cut, we would not know whether or not the girl is a witch.  Since they already established that witches exist here, there is less surprises to be had.

The biggest problem though is basic screenplay writing 101; create a goal for the main characters that the audience can root for.   The main characters are army deserters without any real place to go.  They just happen upon an adventure.   Like Scott, I did not give a shit what happened to them.

Instead of the opening shot of the hanging, there should have been a scene where Behmen and Felsen have some small spiritual miracle.  It would hinted that there is something greater at work.  It could have also suggested that their path was being manipulated for a greater purpose.  As it is, they just decide to take a trip and end up caught up in a battle to save the world.

Robert Sheehan in Season of the Witch.

This is one of those movies that I watched only because both my brothers had already reviewed it and it was available on Instant Netflix. Alas, it is every bit as bad as they said it was. I agree with Eric that the opening scene takes away from whatever meager suspense the story might have possessed but it was also the creepiest scene in the entire movie. In fact, as far as scares go, it was all downhill from there.

Nicolas Cage not only looks bored, he's also bloated. He was never a looker but here his appearance is positively god-awful. Ron Perlman creates the more interesting character but that's partly because his oversized face seems strangely at home in the 14th Century.  And I didn't even realize Christopher Lee was in this movie until I read Scott's review. I guess everyone needs a paycheck.

The landscape these characters travel through is quite breathtaking. Unfortunately it's the best thing about the movie. I agree that the evil CGI wolf faces look ridiculous. The best special effect is when the demon encircles Perlman's character within his bat-like wings and sets him on fire.

There are a few lame attempts at humor. Hagamar, while locked in the stocks, sarcastically says to the approaching Felson and Behmen, “Ah, visitors. What can I do for you gentlemen? Perhaps you'd like to pelt me with fruit or kick me in the groin.” And at one point Felson asks Behmen, “What is that smell?” and Behmen replies, “That would be you.”

At the end I was a bit confused. Was the movie saying there really weren't any witches at all, just innocent women possessed by a demon? But then why the hell am I spending any more time thinking about this cinematic tripe? This Witch is out of Season.