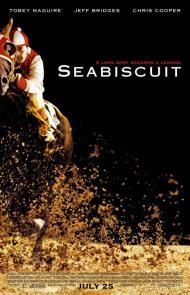 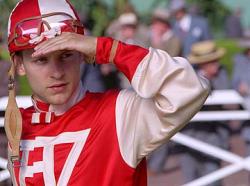 Seabiscuit is an attempt at a feel good movie. The under dog going for a big win is a classic plot device. However, Seabiscuit's annoying editing drains much of its emotional energy.

Tobey Maguire plays a drunken, prone to fighting jockey called Red. He gets hired by a moneyman, who lost his son in an automobile accident. He fulfills the role of surrogate son. Red is hired to ride a loser horse that ends up being a champion.

Yeah, the plot is simple. The story attempts to have some depth. The country is in a state a depression and the average man cheers for Seabiscuit because he is smaller than the other horses. Jeff Bridges has several lines where he refers to the "common man" being able to watch a race.

The first part of the movie is a mess. It tells several different stories until they all meet up because of this horse. Then the movie becomes a more concise tale. However, it is a completely predictable and, sadly enough, quite unemotional story. The jockey and the horse each injure their legs and both recover together to do another race. Call me cynical but I did not give a damn. It is just a f*#@&^$g horse race.

The movie takes great pain and lots of celluloid to show the depression. Lots of black and white film is interspersed throughout the actual plot. It has nothing to do with the plot, other than help establish the setting. An annoying narrator gives history lessons as the movies progresses towards it unfulfilling end.

The movie is supposed to show Seabiscuit as a horse that captured the imagination of a poverty stricken nation. The people of the country supposedly cheered for this horse because he was not supposed to be a winner and yet he was, even against all possible odds. If this horse and jockey could survive and thrive against adverse conditions then so could the people of America. Someone cue the patriotic music.

In my years of watching movies I have rarely come across a film that tries so desperately, yet fails so miserably to manipulate an audiences emotions. I did not care about any of these characters or gave a damn if the horse won or not. 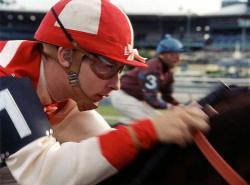 I can attribute my brother's dark opinion of this movie to one of two things; either he has gotten more cynical as he's grown older, or the fact that he's never been much of an animal lover prevented him from enjoying this movie. Speaking personally, I quite enjoyed Seabiscuit, despite its predictability and heart-on-its-sleeve ending.

Eric rather coldly writes about Charles Howard's (Bridges) loss of his son and dismisses Red's (Maguire) drunkenness. Given that Red's family lost everything in the depression and his parent's basically sold him to a horse racer, I'd say there were mitigating circumstances to his behavior. As for Eric's reference to the beginning of the movie being a mess as it tells its central character's stories separately, I have to defend this portion of the film by saying that without this setup, the ending would have lacked the emotional punch that it carries.

As for the annoying narrator and miniature history lessons, as Eric calls them, I enjoyed these moments as well. Rather than trying to teach us history, these scenes merely set the stage and show why a mere "f*#@&^ horse race" captured the hearts and attention of a depressed nation.

One thing that left me wondering after watching this movie is just why so many people have been raving about William H. Macy's performance as the disc jockey. The word Oscar has been bantered around and he's even been nominated for a Golden Globe already for this role. Just why Hollywood seems ready to fall all over itself to honor this so-so character actor is beyond me, yet somehow he's become a critic's darling. His small role here is hardly award worthy.

You can approach this movie from different angles. You can watch it like Eric and dismiss all the sentimentality as pure schmaltz aimed at manipulating your emotions, or you can check your inner-cynic before the movie begins and enjoy an uplifting story about a group of people who beat the odds to become champions. It's your choice. 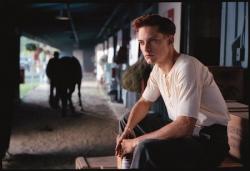 Let's cut through all the crap and state the real reason Eric didn't like this movie. It is obviously too liberally slanted politically. Especially during the voice-over narration. There can be no other reason for him loathing the movie so much. I don't know how many times Eric has complained about how the rich are always portrayed as selfish bad guys by Hollywood. Yet here we have a rich character that has a heart and a conscious and Eric doesn't have a good word to say about him. Hmm. As for the jockey's drinking, I think this was shown in maybe one scene and it never gets in the way of his riding. The last time I checked it was legal for a grown-up to enjoy a drink without being condemned for it. No Seabiscuit is not a great movie. But it hardly deserves the raking over the coals that Eric gave it.

This is one of those story's where fact is better than any possible fiction. In 1938 the horse Seabiscuit got more mentions in the U.S. press than either Roosevelt or Hitler. It is truly remarkable how this used-up and much abused horse was able to win so many great races. His appeal to the downtrodden masses is completely understandable and it is the movies best asset.

That said, the pacing of the movie could have been better. It does take a little too long setting up the back-story. Although I agree with Scott that at least some of it was necessary to identify with the three men whose lives were effected so deeply by this one animal. I also agree with Scott about William H. Macy. He bores me to distraction. He underplays whenever he should play it big and vice versa.

The rest of the cast are very good, particularly Tobey Maguire as Red Pollard. He continues to impress me with his range.

OK, so they do go to the music-swelling-emotional-manipulation-well a few times too many. Still Seabiscuit is a solid three star movie no matter what my brother Eric says.