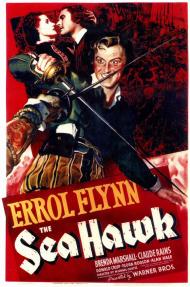 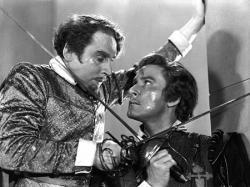 The Sea Hawk finds Errol Flynn in full on swashbuckling mode. He re-teams with The Adventures of Robin Hood director Michael Curtiz and Robin Hood co-stars Alan Hale and Claude Rains. If only The Sea Hawk had spent more time on his character's adventures and less on talking this would have truly been a movie about “Robin Hood of the sea."

Flynn plays a British pirate captain named Thorpe who only robs from the Spanish as they are threatening war with England. As the movie opens Thorpe attacks a Spanish ship. He rescues the British slaves used for rowing and meets the beautiful Maria. He steals her jewels but gives them back in a gesture of good will which of course sets them on a path to fall in love.

The Queen of England then sends Thorpe on a mission to South America where the Spanish are busy plundering the local's gold. Thorpe gets caught and in turn is made a slave. He eventually escapes back to England where he discovers some important information that Maria must help him get to the Queen.

Made during the onset of World War II, The Sea Hawk does not shy from then current political issues. Hitler's Third Reich was growing in Europe and this movie comments many times on it. King Phillip of Spain obviously represents Hitler when he has this piece of dialogue as the movie opens, “The riches of the New World are limitless, and the New World is ours - with our ships carrying the Spanish flag on seven seas, our armies sweeping over Africa, the Near East, and the Far West; invincible everywhere ... but on our own doorstep. Only northern Europe holds out against us; why? Tell me, why?"

The final scene in the movie has The Queen of England giving this speech, “And now, my loyal subjects, a grave duty confronts us all: To prepare our nation for a war that none of us wants, least of all your queen. We have tried by all means in our power to avert this war. We have no quarrel with the people of Spain or of any other country; but when the ruthless ambition of a man threatens to engulf the world, it becomes the solemn obligation of all free men to affirm that the earth belongs not to any one man, but to all men, and that freedom is the deed and title to the soil on which we exist. Firm in this faith, we shall now make ready to meet the great armada that Philip sends against us."

The fun of The Adventures of Robin Hood was Flynn apparently having the time of his life fighting the oppressive Prince John. His cocky charm and swagger made for a great roguish hero. The Sea Hawk is too dramatic and over done with political innuendos. There are several good action sequences but at over two hours long it drags in many places. 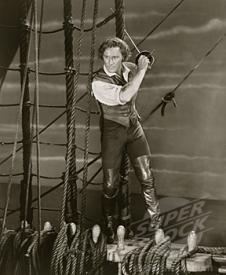 Errol Flynn in The Sea Hawk.

Eric, I beg to differ. The Sea Hawk is a rousing adventure tale. Yes it runs over two hours but it moves like gangbusters. It has plenty of stirring action, especially the impressive sea battle early in the movie. Warner's spent a pretty penny on that scene. Flynn's entrance is classic. First we see his ship approaching from the deck of a Spanish ship. Then we see his crew and the camera pans across the deck of his ship. A monkey climbs the mast rigging (he gets several humorous scenes later on). The camera alights on Alan Hale who asks a question of his captain. Finally, the impossibly handsome face of Errol Flynn appears wearing that famous devil-may-care grin.

Set half-a-millennium ago on the eve of the Spanish Armada, The Sea Hawk definitely makes the most of any historical parallels to the world of 1940. As Eric wrote, there are several speeches that audiences of the day would have instantly recognized for the propaganda they were. However, for today's viewer they need not be a distraction as they fit the historical setting of the movie just as much as they did the world of 1940. My favorite line of dialogue is spoken by Flynn's Captain Thorpe about the Spanish but could also have been said, in all accuracy, of Nazi Germany, “You Spanish have a gift for hospitality when your guests are in chains.”

Warner Brothers saved some money on the costumes, which were recycled from the previous year's big budget epic The Private Lives of Elizabeth and Essex. In that movie Flynn played opposite Bette Davis as Queen Elizabeth I, while this time around Flora Robson plays the most famous matriarch in European history. Her Queen Elizabeth is tough but kindhearted. Her best moment comes when she says of Spain's King Philip II, “Who does he think he is to tell the Queen of England what to do?!” The scene at the end where she knights Captain Thorpe was famously spoofed in a Bugs Bunny cartoon that also included footage of Errol Flynn from The Adventures of Robin Hood.

Originally Olivia de Havilland was going to be cast alongside her frequent costar but she was tired of playing damsels in distress in Flynn swashbuckler pictures. Brenda Marshall got the role of Doña Maria in her stead. Besides Alan Hale this movie boasts such Warner's stalwarts as Claude Rains and Donald Crisp. Una O'Connor has a small part as the Spanish Princesses' English chaperone.

Michael Curtiz and Errol Flynn made a great team. This was their tenth picture together as director and actor. The Adventures of Robin Hood will always be their undisputed masterpiece together but The Sea Hawk ranks alongside Captain Blood as a quintessential pirate movie.   A must see for classic movie buffs. 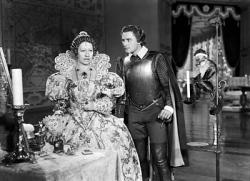 Flora Robson and Errol Flynn in The Sea Hawk.

It's true that there is plenty of swash in this movie's buckle, but there is a darker shadow hanging over this movie that makes it less fun than Flynn and director Curtiz's The Adventures of Robin Hood. Undoubtedly this is because of the start of World War II and the advance of Hitler across Europe.

As my brothers mentioned, the script is filled with allusion to the 1940 political situation. King Philip II of Spain has this line at the beginning of the film, “One day, before my death, we shall sit here and gaze at this map upon the wall. It will have ceased to be a map of the world. It will be Spain.” which sounds strikingly similar in sentiment to Hitler's “Today Germany, tomorrow the world.” slogan. British audiences in particular must have been cheered by England's defiance of a tyrant in this movie.

There are several great action sequences, but I agree with Eric that there was still plenty of room for editing. Part of the problem with the pacing is that the opening battle at sea is the most exciting scene in the whole movie. Almost everything seem anticlimactic after that. There are other action sequences scattered throughout the movie's long run, including the attack in the jungle and galley slave's uprising, but none of them live up to that opening. The big finale features a sword fight between Flynn's Captain Thorpe (thinly based on Sir Francis Drake) and the traitorous Lord Wolfingham (played by Henry Daniell), but he never once comes across as a threat to our hero.

Flynn is fine in the lead, but his charm feels subdued, almost as if the filmmakers didn't want him to be too frivolous or cavalier in a movie while others were dying on real battlefields. Brenda Marshall (the long suffering, on-again, off-again wife to William Holden in real life) is fine, but fairly generic in the lead female role and Claude Rains is underused as the Spanish ambassador. Alan Hale, who I swear had a deal at the time that he must appear in every movie Hollywood produced, brings a little added levity to the story, but it needed more.

The action is here and indeed, plenty of swashbuckling adventure, but somehow the charm just isn't, or at least not in great enough quantities. It's entertaining enough, but Flynn and Curtiz made much better movies together than this one. 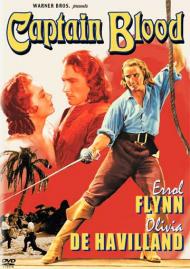