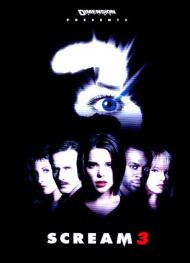 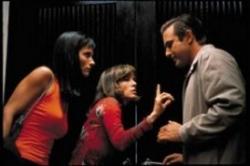 The original two Screams are classic, but Dimension went to the well once too often to make this, the third installment in the series. Their biggest mistake was making it without a script by the creator and writer of the first two movies, Kevin Williamson, although supposedly the story is based on notes he made. Without Williamson's writing, the series becomes just another horror series, filled with the cliches that the first two movies poked fun of so well. Only occasionally does it manage to recapture the spark of the originals.

When the story opens (after the obligatory pre-title murder), we find that Sidney Prescott (Campbell) is living in isolation in the hills of California (hardly surprising given how many times someone has tried to kill her). Meanwhile on the set of Stab 3 (the movie series within the movie series that is based on the events of the earlier movies), someone is killing off the actors and is leaving a picture of Sidney's mother on each of the bodies.

Gale  Weathers is brought in by the police to help with their investigation because of her knowledge of the previous murders. Former detective Dewey, is working on the movie as a consultant. Gale and Dewey's rocky relationship is fodder for much of the movie's comedy, especially with the inclusion of Parker Posey as Jennifer Jolie, the actress who is playing Gale in Stab 3. Posey is a scene stealer, and one of the few bright spots in the film. For a good portion of the movie, it is Gale and Dewey who are the stars and Sidney is pushed into a supporting part in her own series. And the scenes she does appear in seem to be light years away from the comedy, as Neve seems to be acting as if she was in a completely different film, some sort of dark drama.

There are some just plain silly scenes included for no good reason. Kevin Smith's Jay and Silent Bob make a cameo appearance. Carrie Fisher plays a woman who looks just like Carrie Fisher (the big joke is that she says she was up for the part of Princess Leia too, but she wouldn't sleep with George Lucas and so didn't get it). Since a Scream movie wouldn't be a Scream movie without Randy mentioning some "movie rules", they even bring him back via a video tape about trilogies that he supposedly made before he was killed . Oh, and the killer has a hand-held device that can perfectly mimic the voice of anyone, that maybe if he marketed for sale, he could make millions of dollars from the technology it would take to do that, instead of resorting to murder.

The big finale takes place inside a creepy old Hollywood mansion. All of the cast is gathered for rather dubious reasons strictly for the purprose of getting them all together in this location. Once they are there they begin to behave in typical stupid horror movie manners. Gale and Dewey, who both should know better, split up and creep around the house on their own. Gale even walks down the stairs into a darkened basement, while the one lightbulb flickers ominously. Even Sidney, who really, really should know better, behaves in ways that you don't expect.

With Scream 4 due to be released in just a couple of weeks, I'm interested to see if the filmmakers can recapture the magic of the first two films. The good news is that Kevin Williamson is back as the writer of this installment. I sincerely believe there is room for another one if it's done right. The nostalgia factor alone should give it added weight. And, if nothing else, it has to be better than Scream 3, right?  Please?

Courtney Cox and David Arquette, after seeing what the stylist did to her hair.

Scream 3 is definitely the weakest entry in the series. Some unknown person from Sidney's past kills people off after first phoning them. The famous "Scream" costume is now iconic, but it is hardly the best choice by which to kill people. The mask would make it hard to see and the flowing clothe would likely get in the way during all the fights and chases. Other than when tormenting Sidney, there really is no point in even phoning the victims before killing them. The gimmick now seems nearly pointless.

The film starts with Sidney living in seclusion in rural California, under an assumed name. It is a direct lift from Halloween H20, that had just came out two years prior, in which Laurie is living under an assumed name in a rural California private school. Halloween H20 even features a scene of some girls watching a Scream film. Scream 3 should have returned the nod with some sort of direct reference. The first Scream film features a prominent Jamie Lee Curtis conversation, and this should have as well. Lets be honest, Halloween started the whole serial killer terrorizes a girl by killing off her friends plot device.

The biggest loss in the film is that Williamson foolishly killed off Randy in Scream 2. He would have been the one to point out the Jamie Lee Curtis comparisons, especially at the end when the killer is revealed. Also, Randy would have been in his glory being around movie stars and on a movie studio set. Imagine all the comments he would have made to all the actors and directors about their prior work.

Instead, as Scott wrote, Gale and Dewey take center stage. I always liked them as characters, but their chemistry died after the first two installments. Having Dewey awkwardly trying to court or flirt with Gale is charming but the writer here did not know how to explore that. My big question though, is who in the hell approved Courtney Cox's look for this film? This is the least attractive I have ever found her. The bangs on her forehead and her pale complexion make her anything but good looking. She is however, still given a few good snarky comments. After Jennifer Jones says to Gale, "I know we've never met... and I know you never returned my phone call, but after getting into this project, I feel like I'm in your mind." Gale remarks, "Hmm, that would explain my constant headaches."

Scream 3 is good in a very generic way and for the large recognizable cast. It is however, never a good sign for a film when I kept thinking how much better it could have been if only... 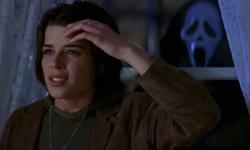 Neve Campbell and Ghostface in Scream 3.

They should have stopped after Scream 2. Last year's Scre4m should have been the concluding movie in the trilogy. For the first time in the franchise the jokes become unintentional in Scream 3. I cracked up at the elaborate security system Sidney has at her hideaway. Scott's right that she plays the part far more seriously this time around and it does seem as if she's in a different movie from everyone else. And of course she is working as a telephone helpline counselor. Hmm. I wonder if the killer will end up calling her at work?

I agree with Eric that the chemistry between Arquette and Cox (they were now a married couple in real life) is gone. What that says about the institution of marriage I'll leave up to the reader to decide. Eric, you mentioned several similarities between this movie and Halloween H20. Here's another.  The creepy old Hollywood mansion where most of the murders take place is the same house that was used as a school in H20.

So with the morose Sidney's part greatly reduced, Jamie Kennedy getting just a cameo, and Arquette and Cox's onscreen relationship floundering, it's left to the supporting cast to carry the show. Parker Posey is worth several chuckles but to me Jenna McCarthy gets the funniest scene. She walks into the movie production office, looks up at the poster on the wall and says with disgust, “Stab 3. Jeezus, I gotta get a new agent.” Then when complaining on the phone about her part she gets this memorable dumb blond line, “The whole shower thing's been done... Vertigo, HELLO!”

Scream 3 lacks the scares of the first 2 movies and the ending is disappointing. If the first 2 Screams were bloodcurdling wails then this one is a pitiful whimper. 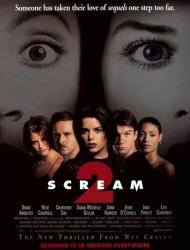 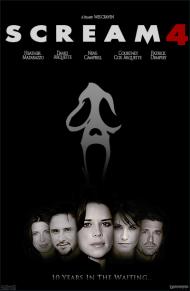