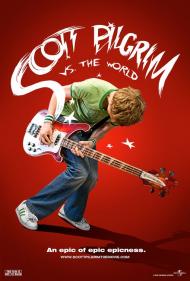 A video game as a metaphor for life is nothing too original.  You complete a goal and then move onto another one.   I am not a gamer. Video games bore me.  People who talk about them bore me.  People who brag about their accomplishments in video games are pathetic.  They are only games.  They are created so mass amounts of people can all do the exact same thing.  Enjoy them for what they are, but please restrain yourself from talking about them with those of us who do not give a shit.

Scott Pilgrim vs. The World is a movie video game.  Scott must defeat different former flames of a girl he likes, before he can get with her.  After each one, he goes up a level and is often rewarded with coins.    I watched this with a gamer, and he noted such details as the music in the background being from real video games.

Even though the video game angle was nothing to get me excited over, I still enjoyed the film's sense of humor.    Routh as a vegan super villain is awesome.   "I partake not in the meat, nor the breast milk, nor the ovum, of any creature, with a face."   Being a vegan gives him super powers, and he easily beats up Scott until the vegan police show up.

Scott's roommate, Wallace, provides some of the best laughs in the movie.   One of the best being when Scott's high school girlfriend comes over.  Wallace answers the door and in the background she can clearly see Scott jumping out the window.  Culkin sells the joke completely.

One unique aspect to this movie is the relationship between Scott and Wallace.  Wallace, is gay and they platonically share the same bed.  At one point Scott walks in on Wallace and someone else. Wallace quickly points out, "Okay, presumably, you may have just seen a dude's junk, and I'm very sorry for that... so is he."  Culkin easily steals the movie from Cera.  When Scott has to fight a lesbian, Wallace yells out, "Kick her in the balls!"

The worst aspect of the entire film was the love story.   No man should ever fight 7 different guys to prove their love for a woman.  Any girl who does not trust your declaration of love is not worth the hassle, and if you do complete some huge task as a test of loyalty and love, then what does that forebode for the rest of your relationship?  What hoops will you have to jump through before she accepts your marriage proposal?

I get it, I get it.  The love story is simply as a plot device, like in so many early video games.  How many times has Link had to save the princess?  A man rescuing a girl is just a simple excuse for a player to find himself in one action sequence after another.  As I have often complained, video games make horrible movies.  Scott Pilgrim vs The World is based on a comic book, but it exposes the weaknesses of video games turned into movies.  Video games are for participating in while movies are for observing.  Scott Pilgrim has some hilarious moments, but to appreciate the movies nuances you must have some video gaming experience.

Have you seen this girl?

I’m not a gamer either, I’m not into the hipster rock scene and I don’t read graphic novels. I’m definitely not this movies’ target audience. I did enjoy some of the humor but I found the action scenes monotonous and the running time too long. The fights are done like old time musical numbers in that they are complete fantasies that take you out of the reality of the story.

Like Eric my favorite character was Wallace. He is gay without being a swishy stereotype and he gets the best lines. Two of my favorites were, “Look, I didn't write the gay handbook. If you got a problem with it, take it up with Liberace's ghost.” And when he refers to a hot straight guy by saying, “I want to have his adopted babies.”

The female characters fare less well. Here we are in the second decade of the 21st Century and the women are still being treated as the spoils of war. Sure they play the drums, talk tough and even get to do battle themselves at the end; still they are all portrayed as emotionally codependent victims throughout most of the movie.

I’m sure I missed many of the Nintendo and hipster rock references. The writers did throw one in for people my age though. Two of the members of Scott’s band “Sex Bob Omb” are named for the 70s band Crosby, Stills, Nash and Young. One is named Stephen Stills and the other Young Neil.

I agree that the love story angle is the weakest part of the script. Scott and Ramona have very little chemistry together and just why he falls so hard for her is never satisfactorily shown. Apart from a few laughs this movie has very little to offer and can be downright annoying at times. At least that is the opinion of this 40-something, non-gamer, show-tune loving, graphic novel avoiding critic. Mary Elizabeth Winstead as Ramona Flowers in Scott Pilgrim vs the World.

I wouldn't describe myself as a gamer, but I'm the closest of the three of us. I do play video games occasionally, but being a gamer is more of a lifestyle than a hobby and I haven't approached that level of gaming dedication since my Commodore 64 days. I was definitely this movie's best hope at being warmly received by any of us. Even so, I found it to be quite lacking. The humor is definitely the best part, while the video game angle is actually one of the weakest.

Patrick, I think you ask your question the wrong way around. It isn't why does Scott fall so hard for Ramona, but rather why would she fall for him? And why would Knives? And why would Kim have done so in the past?  This is dweeby Michael Cera, we're talking about and somehow he has three cute, way out of his league, girls pining for him? Not to mention a hot ex-girlfriend. Part of the appeal of video games is that they allow you to escape reality and become someone else, but who would want to become Scott Pilgrim as depicted here? They should have hired someone slightly cooler for this part.

I found the supporting cast to be much funnier and charming than Cera as Pilgrim. I agree with both of you that Culkin is a scene-stealer. I also liked Anna Kendrick in her small part as Scott's sister and her foul-mouthed friend who can't stop swearing at Scott. Mary Elizabeth Winstead is cute as Ramona and almost unrecognizable from her more grown-up part in the recent The Thing prequel.

There are some funny bits. One of my favorite lines is, "He punched the highlights out of her hair!" Like Eric, I found the vegan bit ("Chicken isn't vegan?") to be amusing and Wallace's ability to text even when passed out is good for a laugh. And like you Patrick, I found the action fight scenes to be the worst part. They're long, drawn out and interrupt the humor. They're not interesting or intriguing and frankly I never cared if he won or lost.

Maybe with a different lead actor and about 20 minutes of running time chopped from it, I might have enjoyed it more. Instead I laughed through parts, but was never emotionally drawn into any of it.