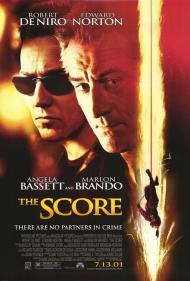 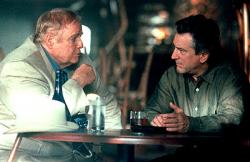 Marlon Brando and Robert De Niro in The Score.

Robert De Niro and Marlon Brando together on the big screen! In the past they have shared the same character, Vito Corleone in The Godfather saga, and later in the brutal biopic Raging Bull De Niro as Jake LaMotta mimicked Brando's famous "I coulda been a contenda" speech from On The waterfront. Still, until now these two titans of The Method had never faced off.

Brando is Max an aging flamboyant thief who brings together the veteran De Niro with the young upstart Edward Norton for one last 'job'. They plan to steal a priceless jewel encrusted scepter made in the early 17th century for a French Queen. Comparisons to The Maltese Falcon are inevitable. After all Brando seems to be doing Sydney Greenstreet, although a cruder and slightly more pathetic version. One major difference between the two movies is that in The Score the hero is the thief rather than the gumshoe.

Ed Norton gives a sterling turn as the cocky rookie yearning for respect from the older, wiser De Niro. Angela Bassett is underused as De Niro's love interest although their scenes together do have the requisite chemistry. De Niro himself seems to almost walk through the film much as the character he is playing, i.e. slightly bored and in need of a vacation; given the characters age and mindset, however, it works to advantage. Still it is Brando, in what could be the final movie in his fifty-year career, who steals the show. Alternating between comic relief and the tragic elder statesman. He imbues Max with every human frailty and is not afraid to show what a wreck age has made him physically. All that remains of his youth is the voice, still so distinctive and unique.

Set in Montreal, The Score rises above the typical heist caper by giving us an unforgettable cast in a story that builds in intensity right up to the final few moments. 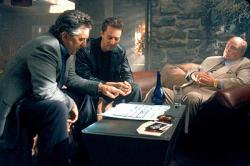 An aging thief decides to do just one more job, the biggest job of his career, before retiring for good. How many times have we seen that one done? Too many times, as far as I'm concerned. If you're going to use a worn out story, than you better add a hook to it. The only hook this movie has its cast. You get to see three great actors from three different generations on the screen all at once. Interesting it might be, but it doesn't make this movie any better or more original.

Patrick is, how can I put it, creative in his enthusiasm for Brando's performance in this movie. First, after reading Patrick's review, I assumed that Brando would actually be in it for more than aproximately fifteen minutes of screen time. As for the comedy relief/tragic elder statesmen stuff, that must have all been going on below the surface and I missed it. All I saw was a fat old man playing a small part which required no great acting or talent. It might be blasphemy to some, but just because Brando used to be a great actor, doesn't bestow greatness on every role he touches now.

De Niro on the other hand just looks bored through out most of the movie. He only really seems to wake up when he's on the job at the end of the movie. Which makes sense for his character, this guy only feels excitement when he's pulling off a score so he keeps on stealing. It doesn't do anything for the movie however except add to the dreariness.

Patrick claims that Brando steals this movie, but I give it to Norton. Not because he is a better actor than the other two, but because he is given the best part. He plays Jack, the brash, young thief who first comes up with the idea of robbing the Montreal Customs House. He's been working there, posing as mentally challenged Brian, a night time janitor. Jack's turn as Brian is both funny and believable. If he didn't want to be a thief, than he could definitely turn to acting. Of the three characters, Jack is the only unpredictable one. You're never sure, right up until the final 10 minutes, what he's going to do next.

The final thirty minutes of the movie, when they are actually pulling the heist, are good. They are tense, well filmed, well edited, and well acted. If only all the stuff leading up to this climax had been as well done.

If you really want to see De Niro and Brando together on the screen than go ahead and watch this movie. There really is no other point in seeing it. 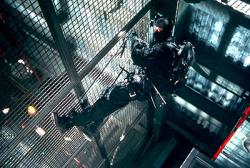 Robert De Niro in The Score.

I thought that Brando was making like Greanstreet as well Patrick, but that is where I stop agreeing with you. Brando and Deniro never face off, they merely share a couple of scenes. This is a paint by numbers, set up and execute robbery flick. It is less entertaining than Oceans Eleven, either version, and slower paced than The Inside Man. This movie is only notable for the one thing Scott mentioned, the casting of four of the best actors in the business.

I liked three scenes in this two hour film. When Deniro almost gets caught stealing, when the couple make out on the couch he is hiding behind, got my attention but it pretty much disappeared until they have the meeting in the park with the nerds trying to act tough. I likewise enjoyed the final part with the actual robbery and betrayal. That leaves lots of screen time for these actors to yack, and the dialogue is none to great at that. “When was it you started thinking you were better than me?” and “You know, you look like shit. What’s your secret?” are sadly enough, some of the best lines this movie has to offer.