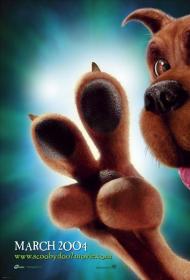 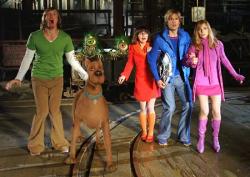 Too many remakes of classic television shows and cartoons resort to spoofing their source material. The Scooby-Doo live-action movies are the exceptions to that rule. While the filmmakers have no problem poking fun at some of the plot conventions from the old cartoons, they do it with a respect for the characters that allows you to laugh with the movie rather than at it. By using humor and yet remaining true to the original idea, they've created a movie series that children of today can enjoy, but so can those of us who watched the cartoon when we were kids. The jokes may be silly, but only in a spirit of light-hearted fun that makes for quality entertainment.

If you ever wondered how the members of Mystery Inc. would handle battling real ghosts, this movie provides you with that answer. When our story opens, our heroes are being honored at the opening of the Coolsonian Criminology Museum, which contains exhibits dedicated to all the monster impersonators that the gang has defeated in the past. The festivities come to a grinding halt when one of the empty 'costumes' suddenly comes to life and begins wrecking havoc in the museum. A masked figure suddenly appears claiming responsibility and promising revenge on the Scoobies. It's then up to Fred, Daphne, Velma, Shaggy, and Scooby-Doo to put an end to the monster menace that is soon threatening everyone in the city of Coolsville.

Even more than the first movie, Scooby-Doo 2 is like watching a cartoon with live actors. The special effects have improved, and much of the style of action is lifted from the cartoons. When Shaggy and Scooby fall down a hole for instance, they hang for a moment, feet scrambling, before plummeting. At one point, the entire Scooby gang becomes trapped in something that closely resembles a life-size version of the old Mouse Trap game. And of course CGI generated Scooby is able to seamlessly blend with the real actors, even more so than before.

Many of the best jokes in the film are sly references to the cartoons. Even I, with only vague memories of the specifics of the old cartoons, was able to recognize several of the old ghosts from the original series. Slight play is again paid to the implied subtext of the characters. At the museum, opening each of the gang has their own particular brand of groupies waiting for them. Shaggy is able to detect his fans by the smell of what they're smoking. There's just the right blend of jokes for the kids along with jokes that will be just slightly over their head, to make it enjoyable to people of all ages.

Along with the same perfectly cast actors playing the Scooby gang, are several well-known actors in smaller parts. Seth Green plays the curator of the museum with a crush on Velma. Their date, for which Daphne dolls Velma up in a skin-tight leather cat suit, is one of the highlights of the movie. Peter Boyle is Old Man Wickles, a former monster impersonator that the gang once put away, and the prime suspect in the new mystery. And as the snarky reporter who can't resist poking fun at the gang, and Fred in particular, is Alicia Silverstone.

The story is fast-paced, bouncing along with a pure sense of fun. Yes, most of the jokes are silly and juvenile, and some of them are quite predictable, but all are still likely to bring a smile to your face.

Movie snobs look elsewhere, but for anyone seeking complete silliness and fun, Scooby-Doo 2: Monsters Unleashed is hard to top. 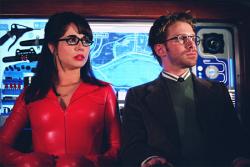 The greatness of any series is the predictability. Knowing and expecting characters to act a certain way is half the fun. You see a set up coming and you know the characters so well, that you anticipate their reaction. This plot device almost always works, unless the writers attempt to change the characters. This is the case of Scooby-Doo 2: Monsters Unleashed.

In this sequel, Fred now has a different shade of hair color and more macho scenes. His ego has disappeared and so has his personality. Daphne does some fighting and little else. She really is nothing more than a pretty face. Velma, again, is the best character. She falls in love, but suspects he may be the bad guy. Shaggy and Scooby decide to try to be serious detectives. They sneak into the villain's hangout. Hello! Shaggy and Scooby would never; I repeat never go into any type of potentially scary situation without some food motivating them. In this movie, they do it without even getting one Scooby snack.

The movie has several extensive action scenes. All are very CGI dominated. Some sequences are more animated than live action. There is, of course, no tension to speak of.

The entertainment of the first Scooby movie was the characters. The best scene is when they play each other. Here they either have no character, or they attempt to change. Series are character driven, and this installment delivers little in that area.