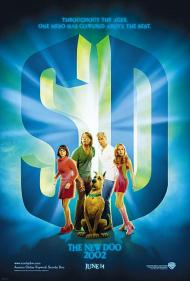 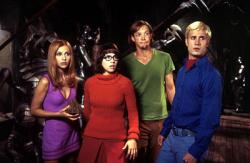 OK, here is the hard part when transferring a cartoon TV show to a live action movie. The cartoon characters really have no personalities to work with. In Scooby Doo you have Fred who's only distinction is that he's the leader. You have Velma, the smart one. Daphne is the poser/damsel in distress. Then of course there is Shaggy and Scooby who are constantly hungry cowards.

In the new movie the writers attempt to give some personality to these characters. Fred is now an arrogant pretty boy. Daphne has gone Buffy with some karate lessons, and Velma has some issues about being the true brain in the group but gets little respect. Only Shaggy and Scooby's characters go unchanged.

The movie starts with Mystery Inc breaking up. Velma is tired of Fred getting all the credit and Daphne is fed up with always being the one who gets caught. 'You come with your own ransom note.' Velma remarks to her. The group is quickly reunited when they all get invitations to solve a mystery on an amusement park island.

Once the main thrust of the plot gets going the movie moves along pretty much like the cartoon. Velma finds clues and Shaggy and Scooby get chased a lot. A few lines are thrown in that you never heard in the cartoon. 'Sorry I didn't always pick you Velma.' Fred apologizes after he is reminded that he always goes off with Daphne when they split up to find clues . 'I mean, dorky girls like you turn me on too.'   Also Shaggy and Scooby do the funniest flatulent scene since Blazing Saddles.

Sarah Michelle Gellar and Freddie Prinze Jr. do little more than walk through their roles. It is not exactly there fault either. There is really nothing else to do with there parts. Linda Cardellini does  a great job as Velma. The inflection in her voice whenever she says 'Shaggy' or 'Scooby' matches the cartoon voice perfectly. Also we get to see what I always suspected all these years. That Velma is hiding one hot bod beneath that turtle neck sweater. The best job however goes to Matthew Lillard for his dead on role as Shaggy. It's as if he walked right out of the cartoon.

The movie has quite a few guest stars. Pamela Anderson has a cameo as a Fred groupie. Rowan Atkinson has a small part as the owner of the amusement park. Mark Mcgrath sings a song to Daphne and briefly chases Shaggy and Scooby. But the most surprising and best cameo is Scrappy Doo's.   A good take on some material that long since clichéd itself. '....if it weren't for you meddling kids.' It adds a little something without changing the tone of the original cartoon. 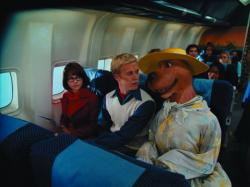 Personally, I always thought the characters on Scooby Doo did have personalities.  Scooby and Shaggy were hippies who always had the munchies (hmmm, what could hippies do that would give them the munchies?).  Fred was always a little effeminate (That ascot, c'mon!).  Velma was obviously a lesbian.  And Daphne was the ditzy tramp in the ultra-short skirt.

This movie version of the classic cartoon does play on those subtle personality traits that were hinted at in the cartoon.  After re-uniting, Velma says that '...I've been on a journey of self discovery.'  There's a shot of the mystery van with smoke coming out of it and the sound of Scooby and Shaggy inside, accompanied by the song 'Pass the Dutchie on the Left-hand Side'.  And later Shaggy tells a girl that Mary-Jane is 'Like his favorite name ever.'  Fred on the other hand, is, as Eric said, made more macho and arrogant.  And sadly, since I'm a fan of Sarah Michelle Gellar's, Daphne is little more than spoiled, and ditzy, who gets to kick ass ala Buffy: The Vampire Slayer.

However, if you are looking for a spoof or satire of the cartoon, this is not the movie for you.  This movie, as Eric said, remains true to the spirit of the original cartoon.  A great deal of the humor is aimed at the under-tens.  The flatulence scene is the perfect example.

What this movie does have is a great since of fun.  It's light and humorous, it doesn't take itself too seriously and just makes you feel good.  I think if you're a child, you'll find it funny and enjoyable, and if you're an adult, it's a flashback to your own childhood.  Not all of the humor is for the kids.  It has enough jokes to keep the grown-ups laughing as well.

As Eric mentioned Matthew Lillard is the stand-out in this movie.  The rest of the cast, particularly Freddie Prinze, you accept that they are the characters, but Matthew as Lillard, truly is Shaggy.  Its almost frightening.  He has the voice and the movements down perfectly.

And even though I hate agreeing with Eric so much, Scrappy Doo does have the funniest scenes in this movie.  "And the saddest thing is, he's not really a puppy.  He just had a glandular problem," Velma says at one point in the movie.

Scooby Doo could just turn out to be the feel good movie of the Summer 2002 season. 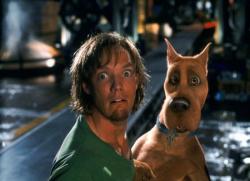 Scooby Doo is incredibly stupid. It discovers new lows in insipidly juvenile humor. It makes Scary Movie seem important by comparison. In other words I enjoyed it. I mean seriously, what else would you want from a movie version of a hugely popular Saturday morning cartoon from twenty-five years ago. This ain't Shakespeare. But it is highly entertaining, lighthearted summer fun for anyone willing to check their stuffy adult-self at the door. If you don't remember what it's like to laugh at a mindless yet appealing cartoon then perhaps this movie will remind you.

As my brothers have already said the cast does a wonderful job recreating the familiar faces. They walk, talk and act exactly like their cartoon alter-egos. What Eric and Scott didn't mention is just how lovable Scooby himself is. He evokes real emotion and is by far the finest example of a completely CGI character that I have yet seen.

Scooby Doo the movie plays like an amusement park ride. Only you won't have to wait in line for an hour first. So cast aside your worries, toss off your responsibilities and take that ten-year-old kid that still lurks somewhere in your heart to the movies. You'll both be glad you did.