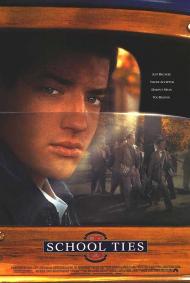 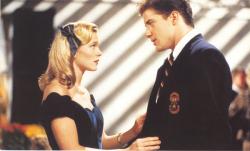 In 1990, Solomon Perel's autobiography, Europa Europa was turned into a motion picture. It tells the true story of a Jewish boy who went to school with Nazis who never realized who he was. If they discover what his religion is, they would send him to a concentration camp and he would likely be killed. Two years later, came School Ties, about a Jewish boy who goes to school with a bunch of Christians, who occasionally make jokes at a Jew's expense. If they discover what his religion is, they will um, well... nothing really.

David is a star quarterback who gets a free ride to an all boy prep school because the prep school wants a winning football team. Of course the school is populated with rich white bigots. David keeps his religion a secret and must endure such frightening situations as listening to two boys talk about what a good deal one got on his record player, "I Jewed him down."(on the price) one boy says. Yes, poor David practically lives in hell. All of the guys like him. He is the star athlete and he dates the best looking girl at their sister school.

One day his secret comes out and, and, and well nothing really happens. His roommate is more upset that David kept it a secret than the fact that he is actually Jewish. Okay, a couple of the boys are out right bigots. One of them hangs a banner above David's bed with a swastika on it. The movie is written so as to feel sorry for David. I didn't buy into it. He is Mr popular at his old school and he becomes the same thing at his new school. He is the star quarterback. He fights anyone who gets in his way. If he is such an "A" personality type then why does he take off his Star of David necklace and hide his religion? His attitude throughout the entire movie is "screw them!" Yet he is sensitive to this one area?

The entire point of this movie is about prejudice, stereotypes and preconceived ideas. Cole Hauser has this line,"Okay, I'll admit it, you know. I'm an anti-Semite. I crack Jew jokes, think they're dirty, greedy. And you know what? David Greene's the only one I've ever known up close." "What's your point, Connor.?" One of the boys asks. "He's a good guy." Hauser responds. Whoah light bulb!

This is all fine and dandy but this movie perpetuates as many stereotypes as it attempts to squash. Early in the movie, David is shown with his fellow lower class friends who, of course, do not care that he is Jewish. Absolutely every boy is wearing blue jeans and a white t-shirt. Everyone! Then, some hoods show up. You can tell that they are hoods because they all ride motorcycles and wear black leather jackets over their blue jeans and white t-shirts. Did the costume designer for this movie walk around with a picture of Fonzie to make sure everyone was as close to that stereotype as possible.

Of course, the worst stereotype this movie indulges in is the tired old, rich white people are bigots. I think it must be written in some Hollywood screen writers rule book that all rich white characters must respond disparagingly to all and any minority characters they come into contact with. Let's be honest here, when a bunch of white people are alone together there is a good possibility that a joke about some minority may get made. When a group of people of the same minority are together. there is a possibility that a joke will be made about white people or about another minority. It happens and you all know it to be true. But just because we all do those things does not make us all bigots. Sometimes a joke is just a joke.

School Ties asks the audience to feel sorry for David because a few jerks make fun of him. If his character was as strong as it is written to be then none of the taunts should matter that much. What kid in school does not get teased at some point or another? David Greene is hardly in dire straits. Solomon Perel kept his secret to protect his life. David keeps his secret because he is insecure about not being popular.