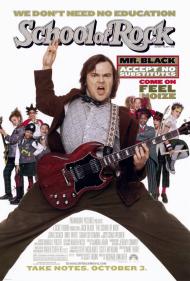 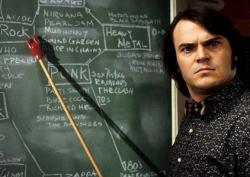 Jack Black is one of the most charismatic actors working today. He is admittedly overweight and does not have traditional matinee idol good looks. Yet, he is able to not only carry a movie, but also make it better.

In School Of Rock, black plays Dewey, a never was rock star. His band kicks him out because he is so overzealous about his music that he is obnoxious. His, substitute teacher, roommate says he is going to have to move out if he can't pay the rent.

One morning, after unsuccessfully trying to form a new band, he answers a call from destiny. Actually, it is a phone call for his roommate asking him to sub at a private school for a few weeks. Pretending to be his roommate, Dewey takes the job.

At his first day in class, his students learn little more than what a hangover is. Besides taking one girls sandwich, he does nothing other than sleep. However, the next day he hears his students playing instruments in music class and he formulates a plan. He turns his students into a rock band.

Dewy is into 70s rock music. He asks the class what their musical influences are. One girl says Christina Aguilera and a feminine boy says Liza Minneli. To both answers, Dewy yells ''NO!'' He then assigns them all homework, which consists of listening to different 70's rock band's CDs.

The central gist of the movie is unoriginal. There is a band contest at the end of the movie and Dewy has to sneak the kids out of the school to blah blah blah. You know where it's going.

What makes this movie work is Jack Black's performance. He is so excited all of the time in this movie that his enthusiasm becomes infectious. Whether you like 70s rock or not you can't help but be pulled in by his passion for the music.

Due to his size, Black has been compared to John Belushi. Belushi was so overrated it isn't funny. The Blues Brothers themselves weren't funny and Bluto was just an obnoxious moron. Jack Black has an on screen charm that Belushi couldn't touch.

In the hands of any other actor, School Of Rock would suck. Black is so sincere and likable that I found myself thinking that I should listen to more 70s rock songs. 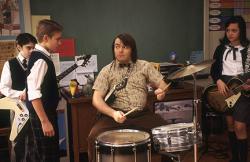 Jack Black is charismatic, but in the same way as a car wreck. They're both ugly, but yet you can't stop yourself from looking at them. He is undoubtedly funny and that's the only thing that makes this somewhat mediocre movie work at all.

As Eric said, the plot is pure cookie cutter stuff and so it is only Black who holds your attention. Unfortunately, the movie also has very little edge to it. It's too wholesome to really show off Black's talents. The jokes are funny, but generate only chuckles instead of full out laughs. Lines like, "Your children have touched me, and I'm pretty sure I've touched them.", which Black says to a group of shocked parents, make you smile, but not bust a gut.

School of Rock is the exact opposite of a chick flick. It's what I call a "Middle-aged Man Movie"; a movie aimed at men who've settled down with a wife and possibly kids, but who want to relive some of their younger days. Old School is probably the best example of this type of movie, but School of Rock fits as well. Here you have an aging, self-proclaimed rocker, playing with children and making them listen to classic rock and instead of thinking it's lame or uncool, they love him for it.

If nothing else, this movie shows us just how far we've come from the 1970s. Music that was once considered hard, cutting edge rock has now reached the point where children can play it in a family film. Somehow, I don't think that was the songwriter's thought when they originally wrote them. 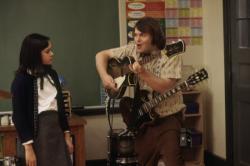 School of Rock was produced by Paramount but this could very easily be a Disney movie. It is very similar to Sister Act 2 only without the nuns and with a bit less schmaltz.

Jack Black is a bundle of raw energy with a devilish smirk on his face, sort of a Lou Costello for the 21st Century. He does indeed make this otherwise unremarkable picture work. He also manages to make the cornball plot and dialogue seem fresher and less stilted than it has any right to be.

I was disappointed by the fact that we never get to see the hilarious Joan Cusack doing her Stevie Nicks impersonation. She's way under used as the school's principal.

Black's love of classic rock is indeed infectious. Some of the best moments are when he is teaching the students by showing old concert footage or drawing a complicated diagram of rock bands on the chalk board.

Lighthearted and funny thanks to Black but everything else about the movie has been recycled a few too many times.