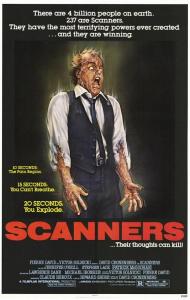 David Cronenberg's Scanners is a cult-classic, science-fiction, horror film. The sight of a man's head exploding shocked audiences in 1981. This effect was accomplished by stuffing a latex head with dog food and rabbit livers and then shooting it from behind with a 12-gauge shotgun. It remains a spectacular moment that has become one of the most iconic in the history of gore-cinema. Unfortunately it happens early in the story and the rest of the movie seems a bit anticlimactic by comparison.

Scanners, for anyone who doesn't know, are people with special telepathic abilities. They can read (scan) others' thoughts, and link their nervous system with another persons, which enables them to control things like the other person's heart rate. Most scanners live unhappy lives as social misfits, unable to control the constant roar of voices in their heads.

Cameron Vale (Stephen Lack) is one such scanner. He is a homeless man living in a shopping mall who is discovered by security agents working for a large corporation called ConSec. ConSec specializes in weaponry and security and has a division dedicated entirely to studying and utilizing scanners. He is taken to the head of the company, a scientist named Dr. Paul Ruth (Patrick McGoohan).

Next we meet the villainous Darryl Revok (Michael Ironside). He's a scanner who has infiltrated a ConSec conference where scanning will be demonstrated to a room full of VIPs. He volunteers to be scanned and before you know it the company's scanner's brains are splattering all over the room. Revok makes his escape, killing five other men in the process.

Vale is recruited to hunt down Revok and, with the help of a female scanner he meets along the way, (played by Jennifer O'Neill) he eventually locates Revok and they have their final showdown. But not before a few plot surprises are revealed. The ending is twisted and fairly satisfying.

The weakest aspect to the movie is the sometimes stilted dialogue and the wooden acting by several cast members. The worst offender is Stephen Lack who, if you'll pardon the pun, is seriously lacking in acting talent. Michael Ironside makes a great bad guy though. He has a sinister air about him and a constant snarl on his face.

Scanners is dated now but it retains its ability to shock. David Cronenberg would go on to an acclaimed career as a director of horror films and this is the one that really put the Canadian filmmaker on the international movie map. Although it was made on the cheap, Scanners is a great example of the state of the art in movie gore circa 1981.

This was the first time I'd ever seen Scanners. The only thing I knew about it was the infamous exploding head scene, which as Patrick said, comes far too early in the film. Apart from that iconic scene, which should have come during the final battle between Vale and Revok, the rest of the movie feels like a good idea poorly executed on a shoestring budget with a cast of amateurs.

Director David Cronenberg has said in interviews that making this movie was a nightmare. Because of the financing structure behind it, the film had to be shot in 2 months for tax purposes. This meant that there was only time for two weeks' pre-production work and not enough time to finish the script. Cronenberg would continue to write it as the film was shot. With no time to build sets, the production team had to seek out locations to shoot, which would in turn influence the story.

One of the many problems caused by this rushed writing is the lack of character development. Everyone is very two-dimensional. We learn a little bit about the main character's past near the end, but even this provides very little depth. Jennifer O'Neill's character suffers the most from this lack. Her only character note seems to be that the script needed a female character. Patrick McGoohan's Dr. Ruth (whose name causes some unintentional humor thanks to the sex doctor of the same name), is intriguing, but his depth is an illusion based on the gravitas that McGoohan brings to the part.

Another problem with the writing is the way the plot meanders along with little regard for logic or structure. There's the definite feel that it's all being made up as it goes along.

The writing problems pale in comparison to the problem Patrick mentioned, which is the horrible acting by Stephen Lack. He acts so poorly that I wouldn't be surprised to discover that Cronenberg just found him on the street somewhere and decided to cast him in a movie. It is his wooden acting that really makes this movie feel so amateur.

What makes so many of the film's problems so troubling is that there's an interesting premise at the heart of it. Better acting and a stronger script could have made this truly great. Vale and Revok have a relationship that in hints and pieces reminded me of that between Professor X and Magneto from the X-Men series. Strengthening and exploring that relationship could have been intriguing. Or if Vale had built a team of Scanners working for Dr. Ruth, it would have been easy to make this movie into a franchise with a plethora of plot possibilities.

Although considered a cult classic, this is a seriously flawed movie. It has potential, but if not for that exploding head, I doubt it would be remembered by anyone who isn't a member of that cult.